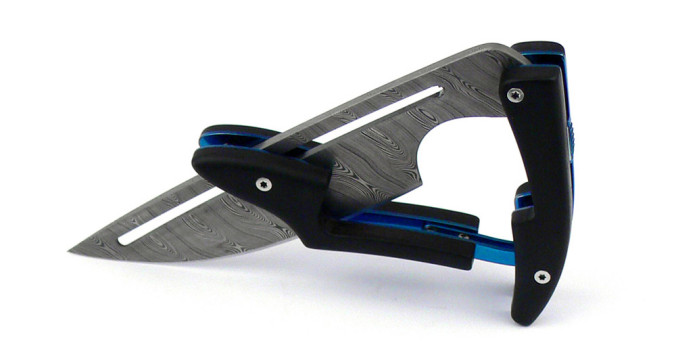 One of the things I love most about the knife community is the constant quest toward innovation and freshness. While I love dissecting the minute changes in the latest flipper, it’s those completely ground-breaking models that keep me in awe.

For a tool that’s been around for a couple million years, the knife is still experiencing some pretty radical changes and creativity. While these knives can be hit-or-miss and many have been discontinued, they stand as evidence that no matter how long something exists, great minds can always think outside the box.

Here are 15 knives with the most interesting deployment mechanisms.

Let’s start off with one that most people will instantly point to when you mention unique opening mechanisms:  the Kershaw ET. Standing for External Toggle, the ET hails from the genius minds of Grant and Gavin Hawk. This father and son duo has developed some pretty out there designs like the TOAD, Boker Griploc, and many more.

The Kershaw ET uses a toggle mechanism to open and close the blade. You can actually engage the blade through many ways (using your thumb like a traditional folder and dropping the handle while holding the blade), but the toggle is probably the most fun. You can use a lever near the butt of the handle to open and close it. The knife was discontinued, probably because there’s the danger of the knife closing on your thumb when you use the toggle.

Here’s a gif of how it opens with the toggle from this review:

Next up is another discontinued knife. The CRKT Rollock is a fascinating knife with a cool opening mechanism. To deploy the blade, you press down on the blade (specifically on some jimping near the rear of the spine) when closed. That pops the blade up, and then you slide it completely open.

This factory version from CRKT was inspired by the Rolox from Blackie Collins. Collins is often cited as the first person to create an assisted-opening knife, though Ken Onion may have invented the SpeedSafe assisted opener concurrently.

Here’s a gif of the opening from this commentary-less YouTube video:

The Warlock from Paragon Knives by Asheville Steel (I know that’s a mouthful) is actually a new knife. Not quite an automatic knife and not quite an assisted opener, the Warlock is its own category. When shut, the blade is completely invisible. So how do you open this baby up?

With the press of a button, the handle opens up (think Moses parting the sea) and you use gravity to take it home. The same thing goes for closing it. When the handle parts, the blade slides back inside. You’ll want to make sure the knife is held the right way or your palm could be in for a rude surprise.

Check out this gif of the Warlock in action: 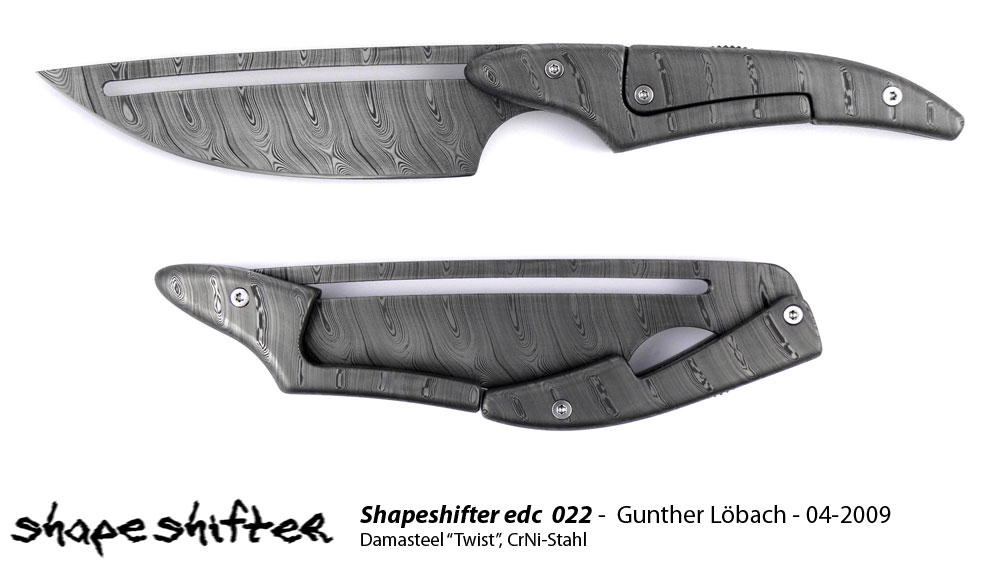 Prepare to have your mind blown. The Scorpiodesign Shapeshifter may have one of the most unique opening systems. When closed, the knife hardly even looks like a knife. If you’ve never used one, it’d take a few moments to figure out how to use it.

Basically, as the tip of the knife travels through the butt of the handle at an angle, the middle portions folds into itself and the snaps into place. I’m not doing it justice in my description. The knife is meant to be a great EDC knife, but it seems like it would take a lot of time getting used to it.

The Fulcrum from CRKT was discontinued, but it made a comeback with the Fulcrum 2 in 2016. This Russ Kommer design uses a patented opening mechanism called the Fulcrum Action. So how does it work? When the left side of the frame is pressed with the thumb, the blade swings open about 90 degrees. When the left side of the frame is pulled back, the blade opens the rest of the way. The cool part is that when you’re opening it, you can see part of the inside of the knife.

This new version of the Fulcrum has a 2.75-inch blade and swirled CPL handle scales. It’s a great knife to play around with when you’re bored.

This is the original Fulcrum from a CRKT video:

Most people are familiar with the out-the-front knives, but how about out-the-side? The Schrade Viper Side Assisted Opener deploys the knife from the side of the handle. When closed, one side of the handle shows the blade waiting inside; the other has a peculiar hole toward the top. To open up the knife, you simply push the blade through the hole until the spring assist activates and sends the blade hurling open.

To release the 2.5-inch blade after it’s open, you pull back a button on the handle and then push it closed. A safety button keeps the knife from engaging when you don’t want it to.

Here’s the knife in action from Schrade:

The Funny Folder from A.G. Russell is an aptly named knife. The design is actually fairly old, more than 50 years old to be exact. To deploy the blade, you push the handle from the side while holding the frame (not unlike the Schrade Side Assist). Once the handle is fully opened, you pivot part of it back to reveal the blade.

It has a drop-point blade and a titanium handle. It’s not a hard use knife, but it is fun to use. Funny folder indeed.

This is the Funny Folder in action:

The Lone Wolf Defender was the 2009 winner of the Overall Knife of the Year award at Blade Show. The designer of the knife, Paul Poehlmann, invented the Paul Axiel locking mechanism, which can be seen on the Defender and a few others.

One way to open this knife is to hold the pivot between your thumb and index finger with the handle pointing upward. When the pivot is depressed with your fingers, the blade unlocks and the weight of the handle will cause it to fall, revealing the blade. To close it, you do the same thing but in reverse.

This is another fun way to open and close your knife. The Defender is billed as a tactical gentleman’s folder with a 3.9-inch blade made from 154CM steel.

Yet another winner of the Overall Knife of the Year award at Blade Show — this time in 2004 —the CRKT Snap Lock is a design from the creative mind of Van Hoy. This is another in a line of folders that open from the side. To engage it, you use your thumb to depress the thumb wheel and open up the blade. There is a thumb wheel on each side for ambidextrous opening.

The big advantage of the Snap Lock is that it opens from the side, meaning when you’re applying pressure to the blade, it is less likely to fail.

Unfortunately, the CRKT Snap Lock has been discontinued.

Here’s a gif from this short video:

The Smith & Wesson Power Glide could be considered an OTF knife, but it’s not like the others. The blade does come out the front of the knife, but the fun part is getting there. When you pull the closed handle apart, it’ll reveal two aluminum crosspieces that connect to the bottom of the blade.

This is a cool knife that’s not entirely practical for hard use, which is probably why it was discontinued. Still, it earns marks from us for its cool opening mechanism.

Back before there was Benchmade, the iconic company was known as Pacific Cutlery (and Balisong USA before that). The balisong has a unique opening method, but since it’s a pretty common opening style, we won’t include it here. But the cool opening design from Barry Wood fit right into the balisong-focused line of Pacific Cutlery.

The Pacific Cutlery 983 Barry Wood is pretty close to a balisong because Barry Wood’s interesting swing lock pivots the handles open to reveal the blade. You essentially rotate one of the handles all the way around. In the process, the blade locks open.

Barry Wood’s swing lock is actually featured on a number of his custom knives. Even though he passed away in 2014, his son-in-law Mike Irie still makes some knives with the swing lock.

I couldn’t find a better video than this, so you’ll have to see this gif with a partial view:

In 2011, the winner of the Imported Innovative Knife of the Year award went to a little knife called the aX-Dobolock. The Dobolock is an ingenious design that’s similar to Paragon Knives by Asheville Steel Warlock and the Schrade Viper Side Assist. To open this bad boy up, you press the top of the handle to make it open up from the bottom. Once one side of the handle is completely open, you whip your wrist to get the blade back up to the top. Then you snap the handle shut again in a swift motion.

Writing it out makes it sound clunky, but you it can be one quick cohesive motion with a little practice. You use a hole in the side of the handle to push the other handle open in order to close the knife, if that makes any sense.

Here’s a gif slowing down the action because you can’t see it when you do it at full speed:

The fact that CRKT has a fourth knife on this list of 15 means the company is really into producing some innovative designs. While this is yet another discontinued model, it does have some cool features. The Hole in One has an open design with no enclosed handle. The knife is designed by Tom Hitchcock and is very similar to the CRKT Snap Lock by Van Hoy. It opens from the side.

This review shows the Hole in One in action:

The first thing people try to do when they see the Camillus Dominator is figure out whether it’s a fixed blade or a folder. The blade is fixed, but a folding mechanism reveals the blade.

When the knife is closed, a protective mechanism covers the blade, making it safe and easy to carry. To open it, you press down on a notch and pull the cover mechanism back to reveal the edge of the blade. This is unlike most of the others on this list, but it’s an interesting design that I hadn’t seen before.

Finally we have the Fred Perrin Le Tri-Folder. When you get it down right, you could whip this knife around so fast that it looks exactly like a balisong in a skilled person’s hands. The knife is three pieces of metal each connected to only one other piece by a pivot screw. When you open it up, the blade swings out and you close the handle again to make a virtual fixed blade.

Then you open it up and swing the blade back inside. This is similar to the Cold Steel Triple Action Folder that came out some time later (and has been subsequently discontinued). It does take some getting used to, but once you do, you could have the knife open and ready to go in an intimidating second.

Here’s a slowed down version of the opening mechanism, but like I said, it can be as fast as a balisong:

Check out our archive of posts with weird knives or take a look at some of our other favorite posts, including 10 Insane Art Knives, the Most Bizarre Spyderco Designs, and the Knives with the Strangest Blade Shapes.

Steel Will Gekko 1505 Folder – Badass Knife of the Week