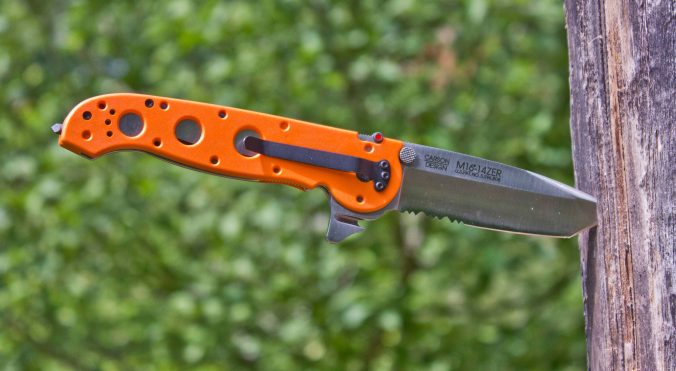 Your car might suddenly careen off the road before landing upside down in a creek or your clothing could get trapped in an escalator unexpectedly.

In either situation, only a knife can save you from certain doom. While any knife can save someone in a pinch, manufacturers have seized on the opportunity to create models specifically designed to aid in a rescue.

So we compiled a list of 20 of the best rescue knives. These come in all designs and styles, from small folders to massive fixed blades.

Take a look and let us know your favorites. 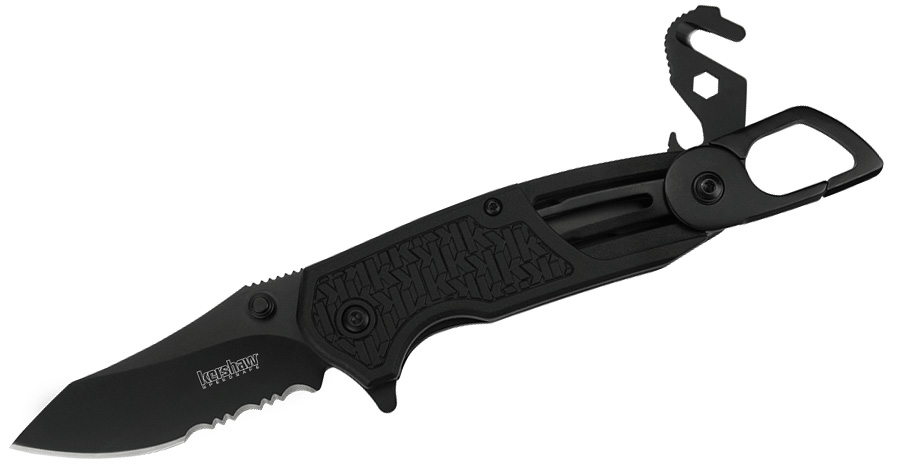 The Kershaw Funxion EMT is an updated version of the knife with a feature-rich design. The knife comes with a 3-inch partially serrated blade that deploys with the SpeedSafe assisted-opening mechanism.

Hidden within the K-texture GFN handle is a carabiner clip, hex wrench, cord cutter, glass breaker tip, and screwdriver tip. This is a nice multitool to carry that would come in handy in the event of an emergency. This knife is particularly useful for an EMT or medic. 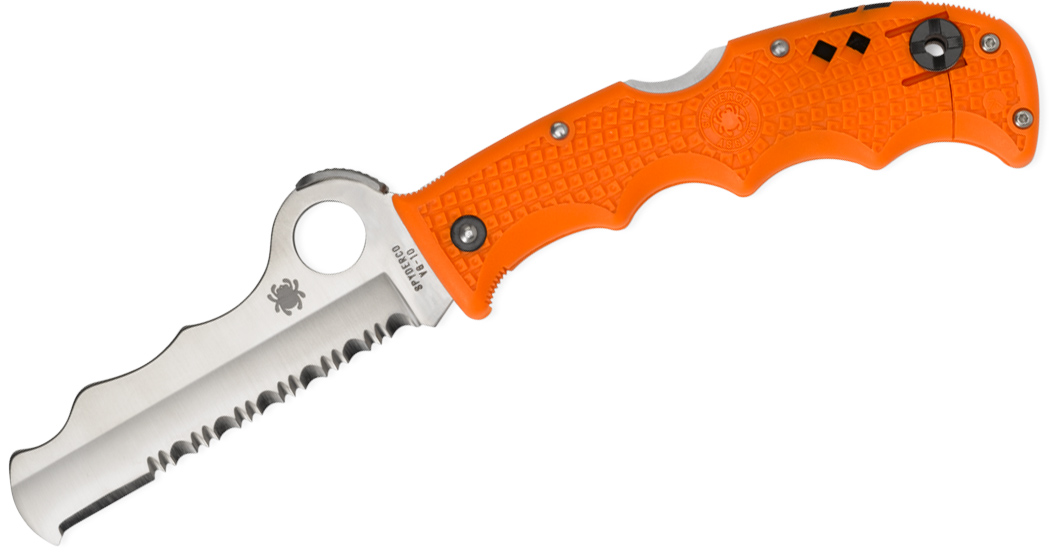 Spyderco makes some bizarre knives, but there’s no denying they’re great at their job. The Assist is no exception.

According to Spyderco, the knife was designed for emergency, fire, and rescue professionals (as well as civilians who like to be prepared). The 3.687-inch VG-10 blade features a blunt tip and a partially serrated edge. Along with the Round Hole, the knife features a protrusion that further aids in easy one-handed opening.

The handle is also jam-packed with features, whether you’re talking about the retractable carbide tip, survival whistle, unique squeezable blade when closed, or wavy blade for a comfortable grip when breaking glass.

Not all rescue knives have to be folders. And when you’re talking about a fixed-blade rescue knife, few are as tough as the KA-BAR BK3 Becker Tac Tool. This knife is a real beast you wouldn’t be afraid to use to rescue someone from a burning building.

Rick Hinderer may be a famous knifemaker, but as a former firefighter and EMT, he also knows a thing about rescues. He put his experience to use in the Gerber Hinderer CLS.

Standing the Combat Life Saver, the knife features a 3.5-inch partially serrated blade with a large thumb stud for easy opening with gloves. The handle also has a seat-belt cutter, glass breaker, and oxygen tank wrench. 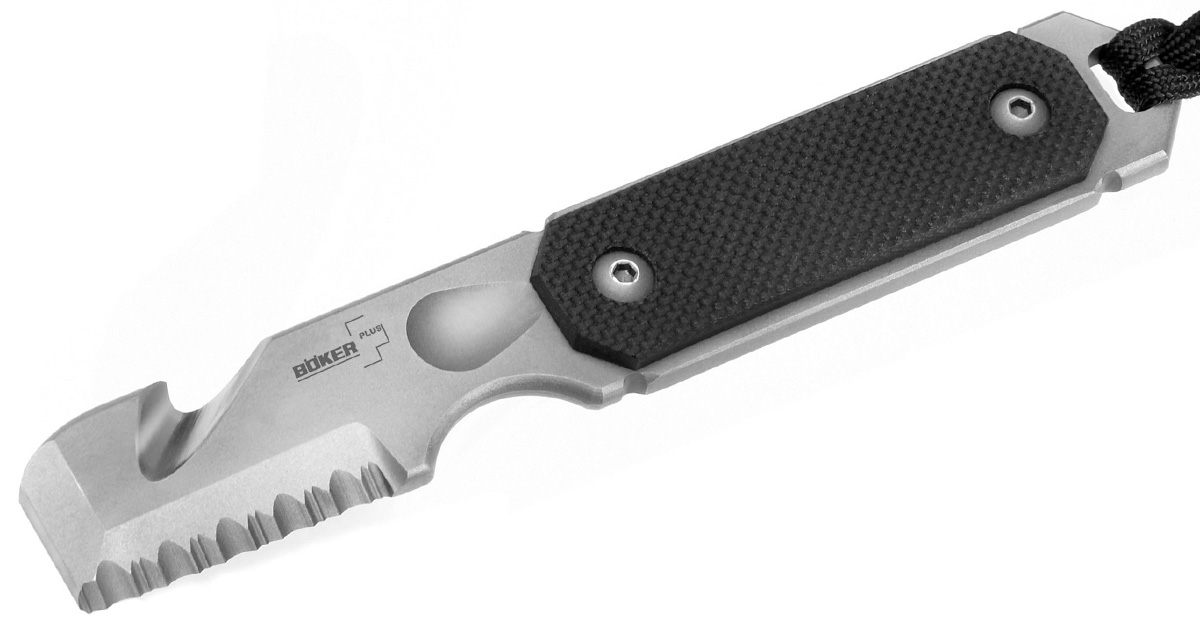 The Boker Plus Cop Tool is an amazing EDC. This fixed blade is not your typical knife in that it is designed to pry, chisel, hammer, and shatter glass. When you’re in a jam, this knife can do it all.

Unfortunately, as of this writing, the knife is out of stock everywhere. I’m hoping it comes back in stock soon. 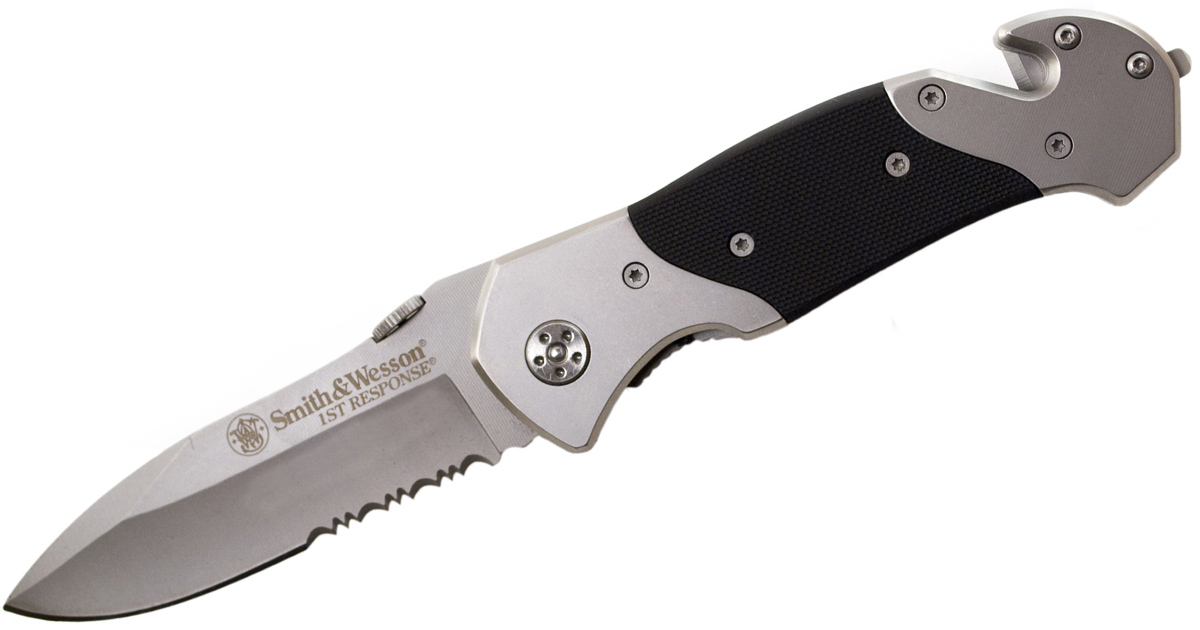 Smith & Wesson makes a variety of First Response knives. The difference between these and many others on the list is they’re dirt cheap. These are knives you shouldn’t be afraid to put through the ringer in the event of an emergency.

The S&W SWFRS First Response is a good choice at $16. It comes with a liner-locking partially serrated blade, a seat-belt cutter, and a glass breaker. 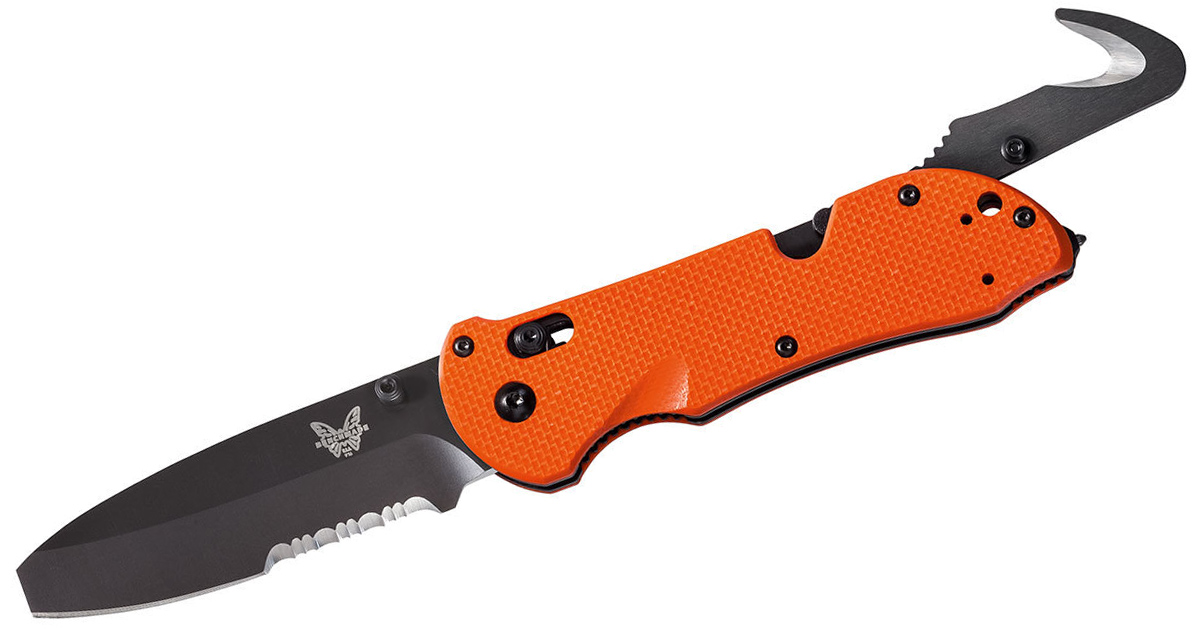 From the cheap S&W, we make a turn toward the higher end with the Benchmade Triage. When you want something with a little more quality and features, the Triage is a good way to go. The knife has been tested by the “world’s foremost experts.” It has a 3.4-inch partially serrated blunt tip blade, a safety hook, and glass breaker. 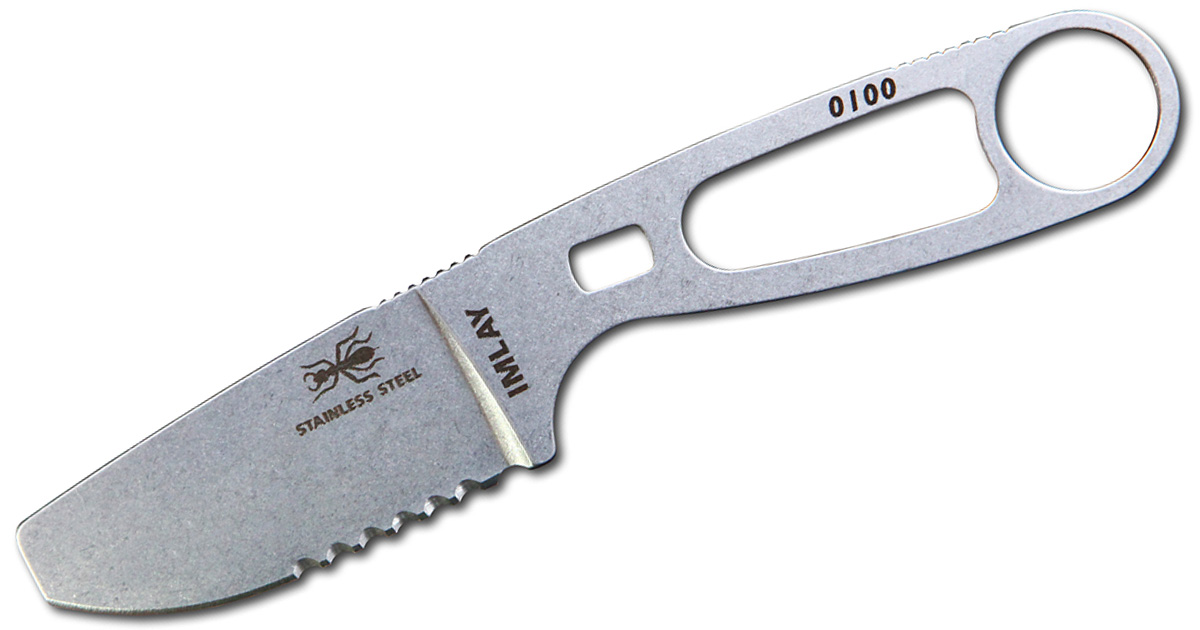 The ESEE Izula is one of the best EDC fixed blade knives around, so ESEE did the logical thing and made a rescue version of the knife. The result is the Imlay.

The Imlay features the same general design as the Izula but with a partially serrated blade and a blunt tip. 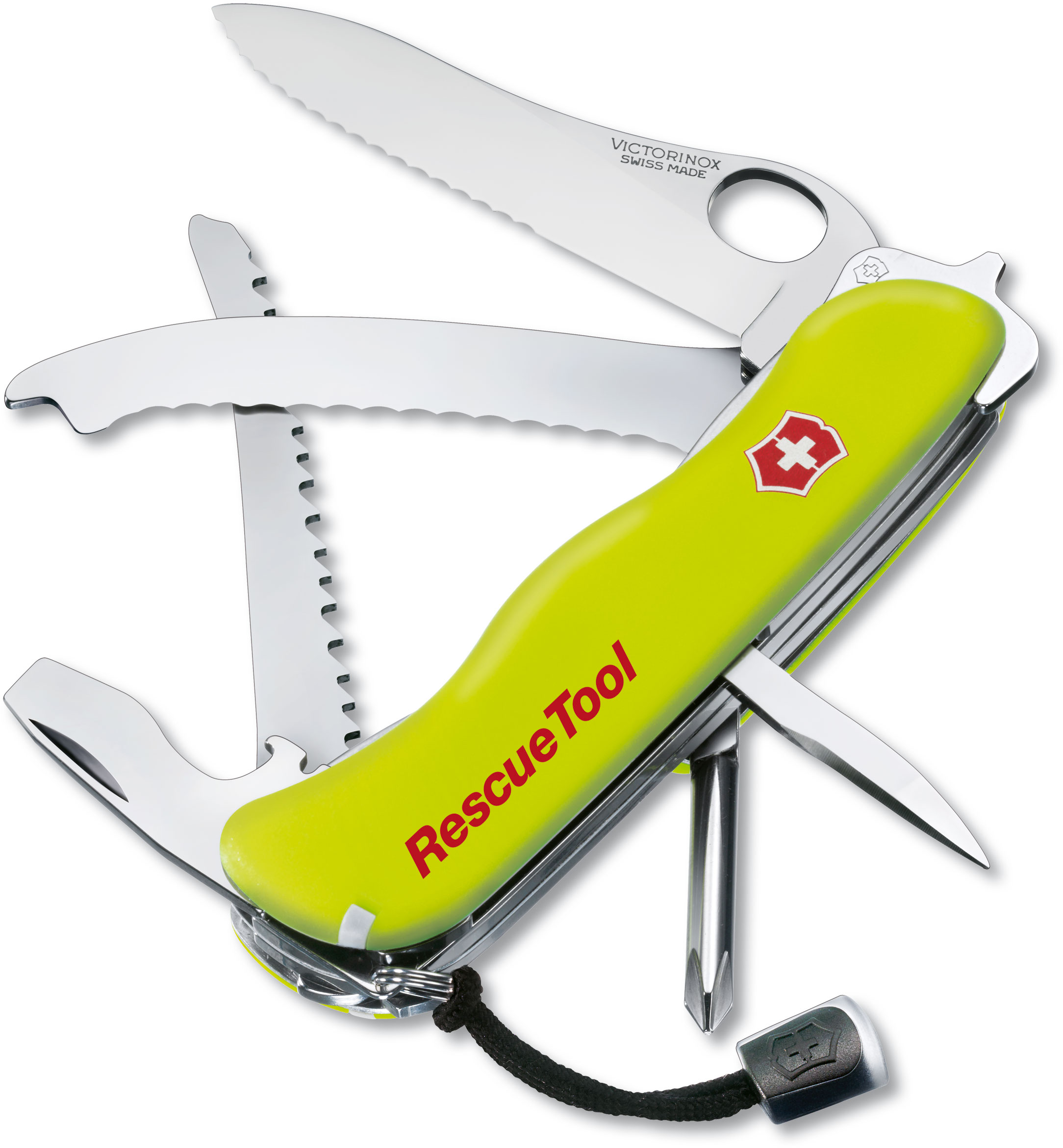 A simple Swiss Army Knife is often good enough to get you out of a jam, but Victorinox created a true rescue tool with the help of rescuers. The result is the simply named Victorinox RescueTool.

It features a seat-belt cutter, locking blade that opens with one hand, a disc saw for shatterproof glass, and a glass breaker. The handle comes in either luminescent or black. 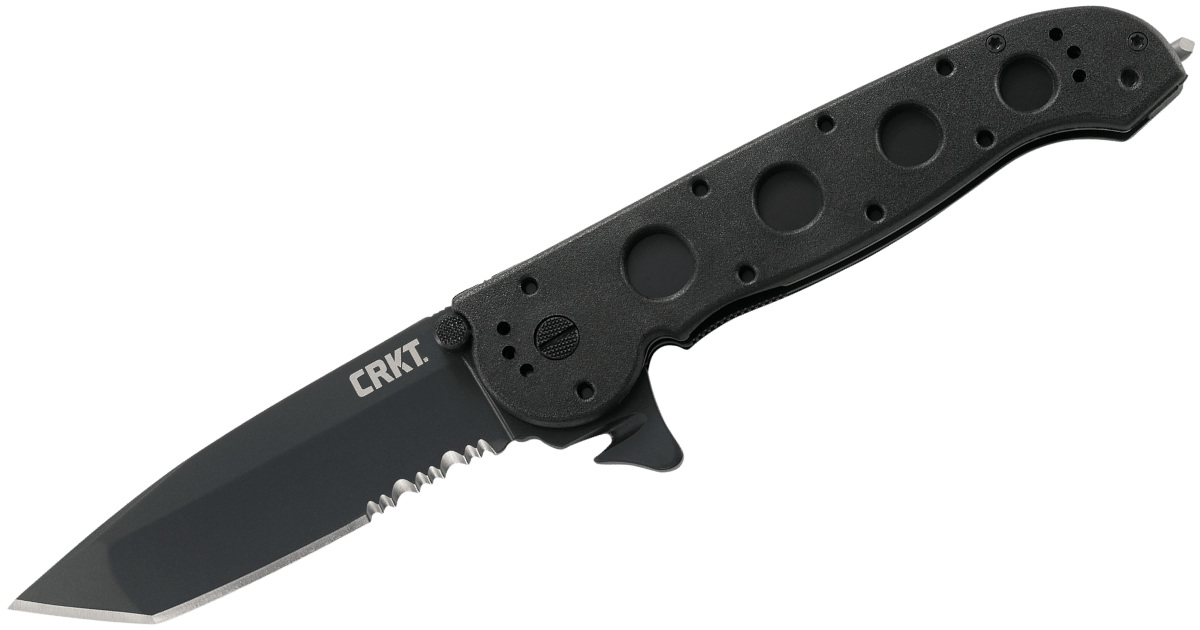 There is no shortage of models of the CRKT M16. As one of the flagship lines for the brand, you can find it in a ton of different iterations, including the rescue version.

The M16-14LEK is designed for the emergency services field. It features black scales and a partially serrated 3.75-inch blade. There is a seat-belt cutter added to the flipper tab and a glass breaker at the butt. 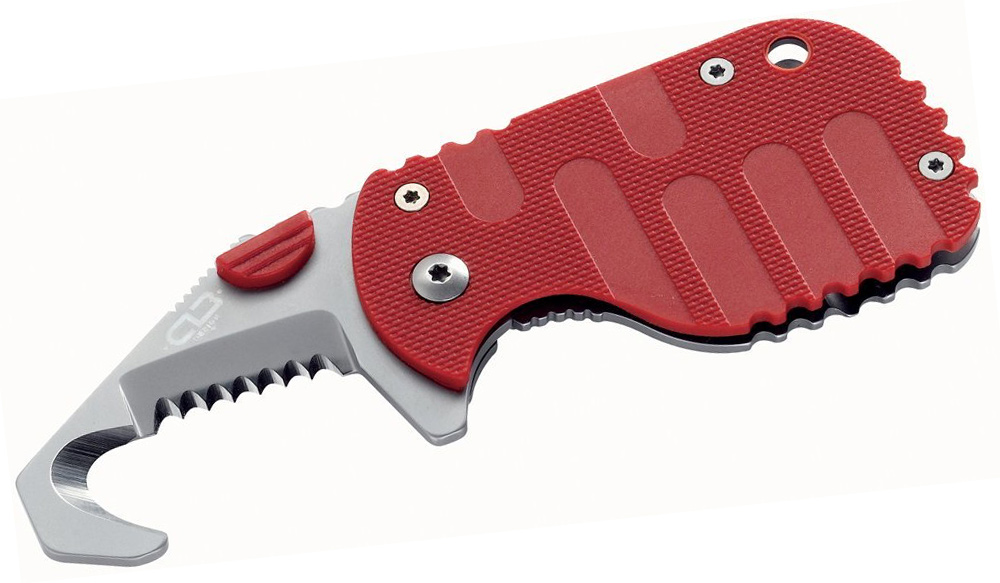 Chad Los Banos has created a lot of interesting designs for Boker, including the Rescom. This bizarre little folder looks unusual but works flawlessly for rescue workers and is based on the Subcom.

The 1.88-inch cutout blade has a seat-belt cutter and serrations that can save you in a hurry. It is available in red or black handle scales. 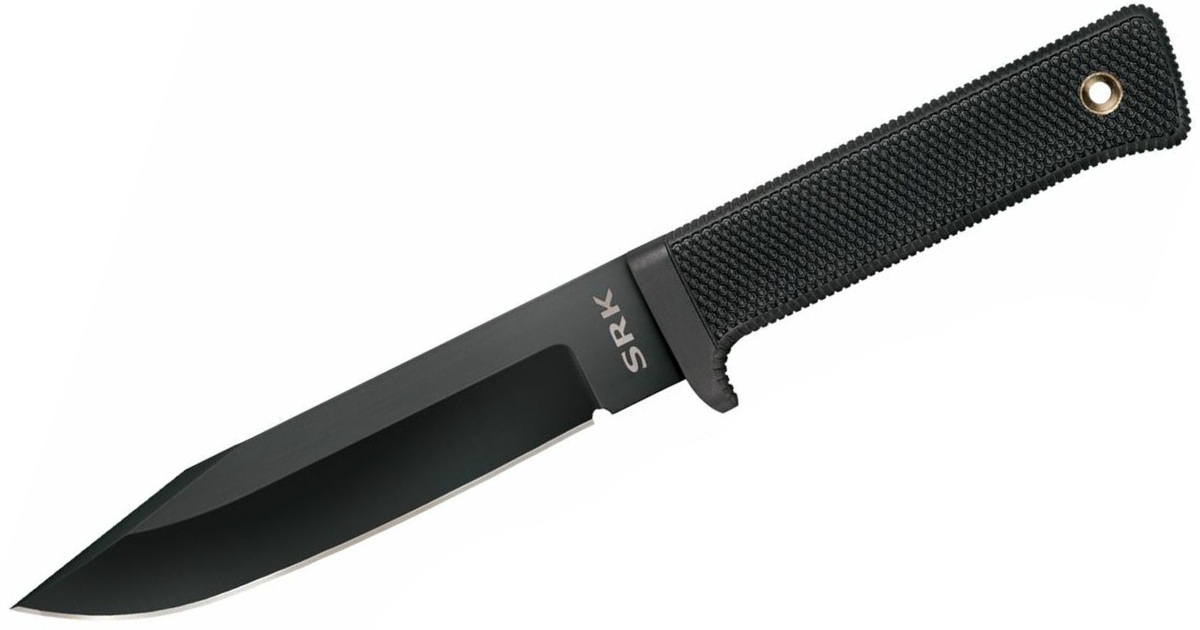 The SRK is not your traditional rescue tool, but it performs well in more rugged rescue operations. The SRK stands for Survival Rescue Knife, and the design is no-nonsense. The 6-inch blade is made from SK-5 steel, and the checkered handle is Kray-Ex. 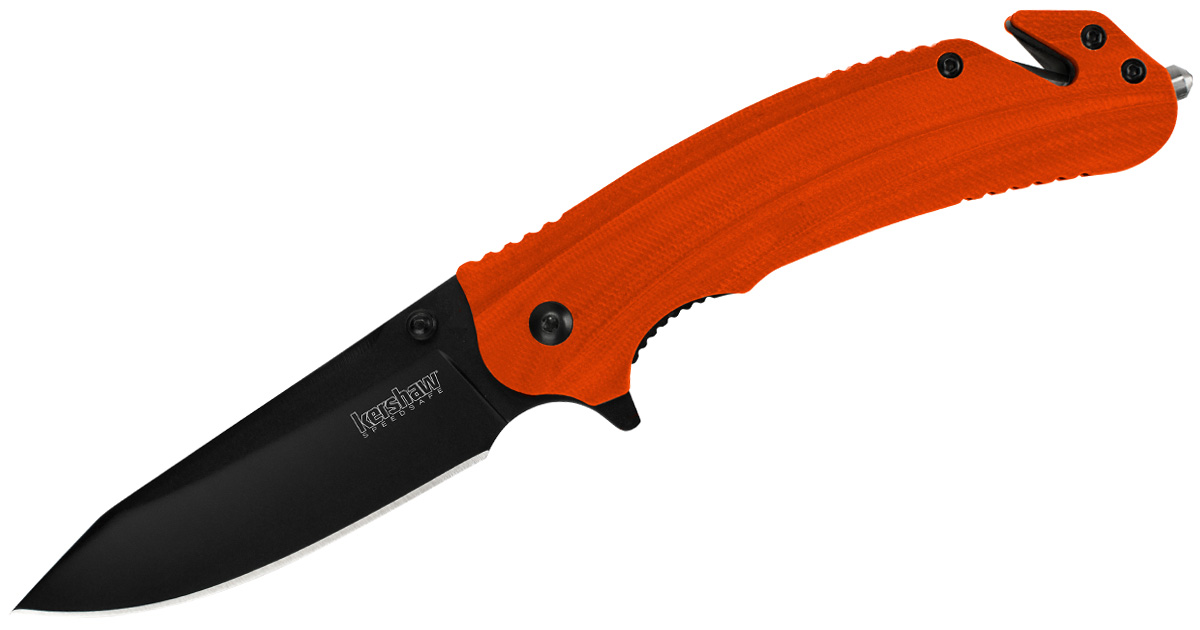 Kershaw has another budget-friendly option for a rescue knife. The Barricade uses assisted-opening technology with a bright orange glass-filled nylon handle. 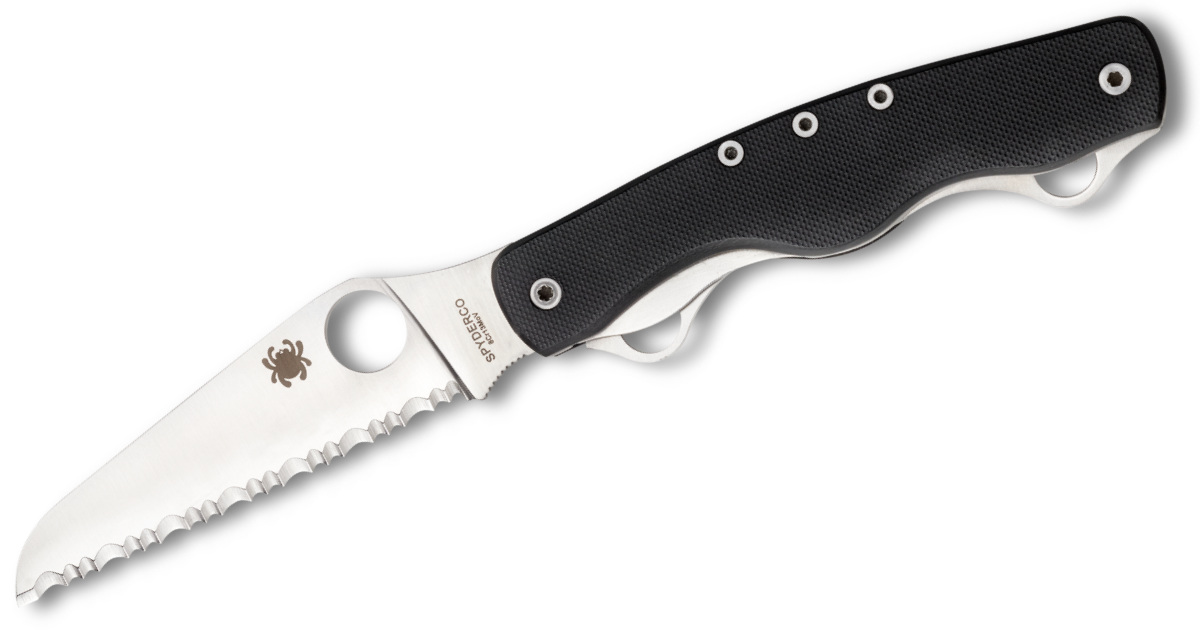 The Spyderco ClipiTool Rescue is the ultimate rescue tool with several functions geared toward saving lives. The 3.5-inch sheepsfoot locking blade has a relatively blunt point with a fully serrated edge.

It also has a hook-shaped cutter for quickly removing clothes or cutting seat belts. A non-locking screwdriver adds an extra element of usefulness. 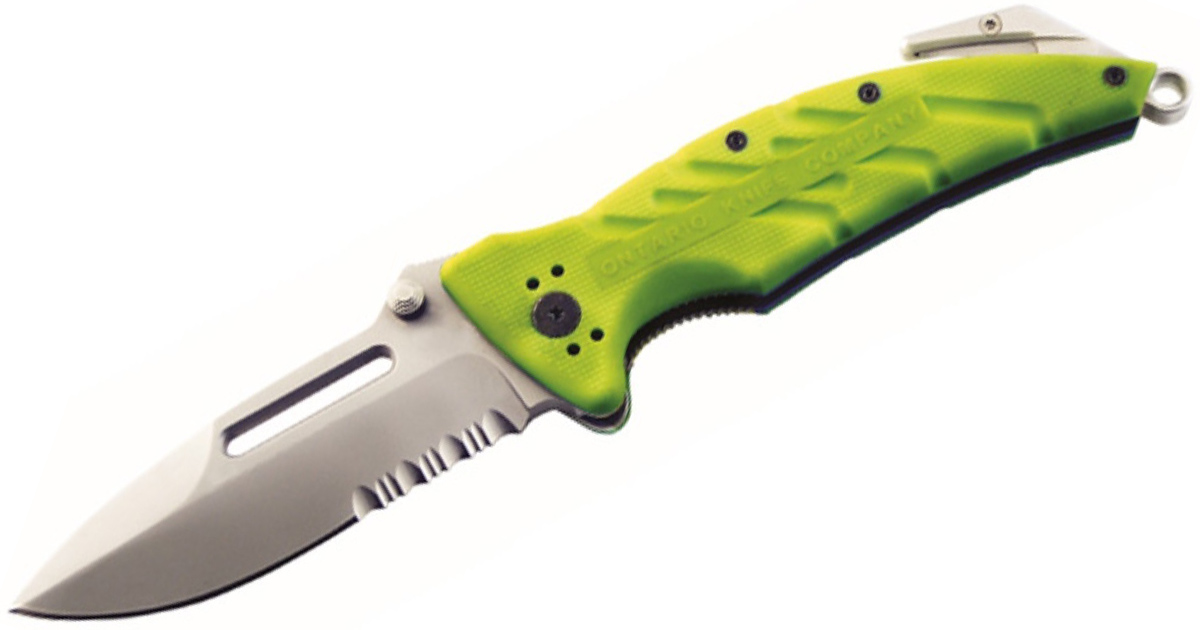 At an overall length of 8.2 inches, the Ontario XR-1 is a hefty rescue knife with the typical features. The 3.375-inch partially serrated blade is made from Bohler N690Co steel, and the safety green handle is Zytel. You can’t really go wrong with this one. 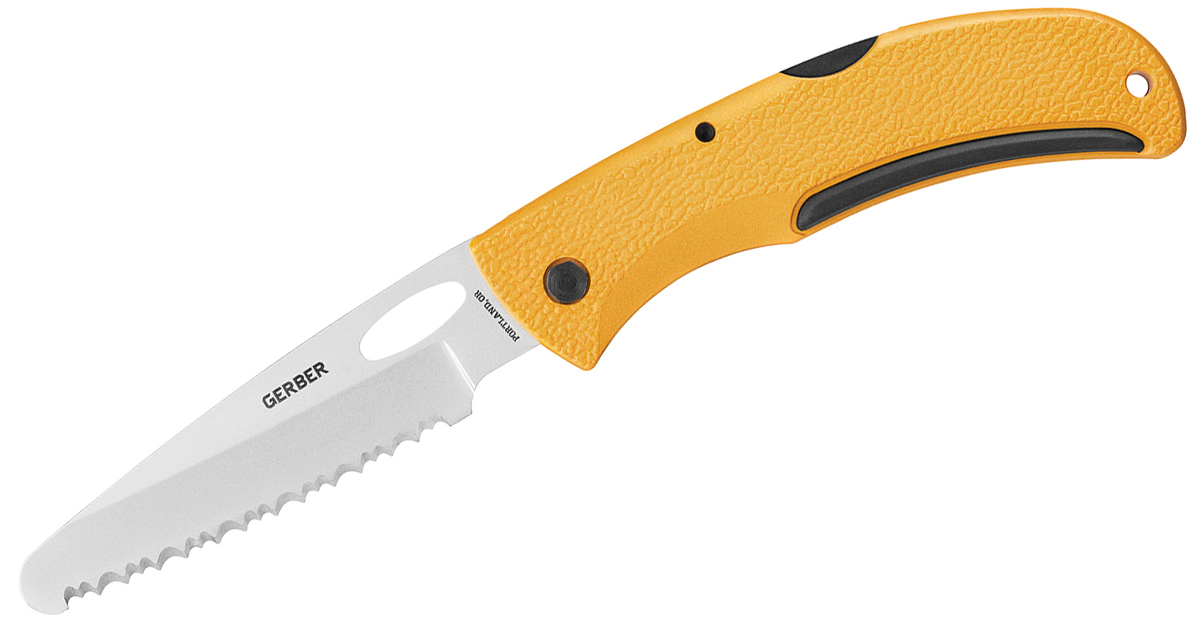 The E-Z Out is a staple of Gerber, so it’s not surprising to see Gerber create a rescue version of the knife. The blade is 3.5 inches and has a serrated blade with a blunt tip. The Kraton handle is bright yellow for increased visibility.

This isn’t the most expensive knife out there, but it does what it’s meant to quite well. It’s easy to just toss it in your glove compartment and forget about it.

The Schrade Professionals is in the same vein as the Boker Plus Rescom. It has a design optimized for rescue and rescue only. The blade has the seat-belt cutter at the tip and large serrations along the whole edge. At the blunt tip is a small tool to pry.

The handle, in bright red, features a spring-loaded glass punch. 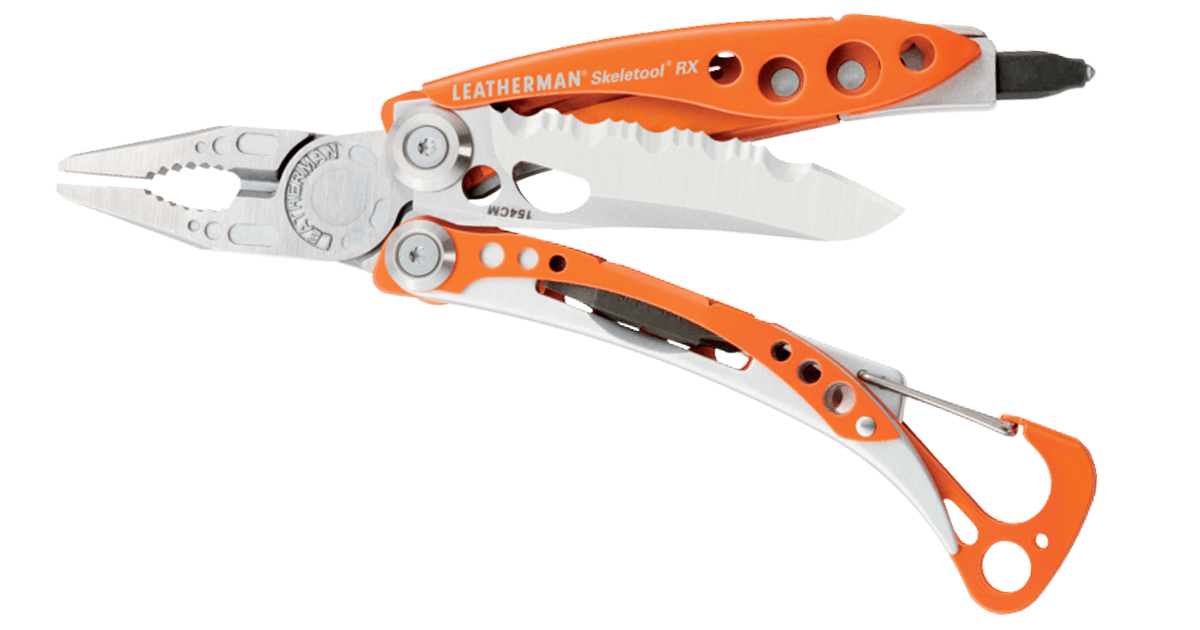 The Skeletool has been a go-to EDC of mine for a while (well, until my dad took it from me). Leatherman made a version specifically designed for EMTs in the Leatherman Skeletool RX.

This version is essentially the same except for a few key differences. Not only is the tool orange but it also has a 154CM serrated blade and a carbide glass break bit where the screwdriver bits went. Overall, it remains a handy tool. 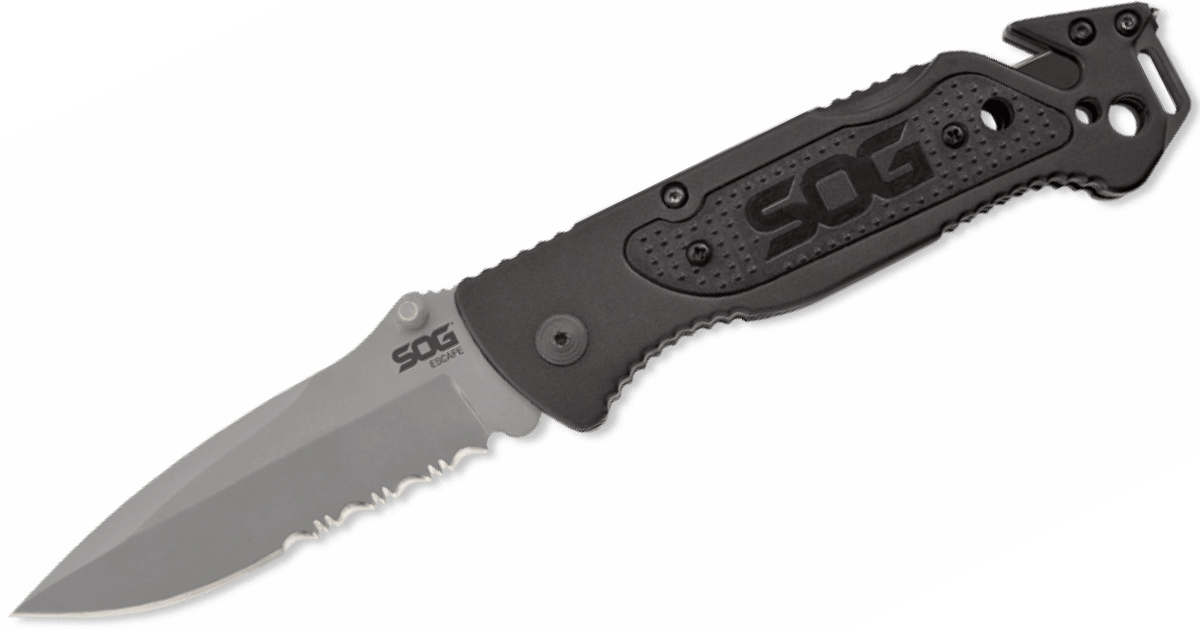 The Escape has an apt name. The knife allows you to escape from harrowing situations with its design.

The 3.4-inch blade has partial serrations and the handle features a seat-belt cutter and glass breaker. It engages with a thumb stud and has jimping all around the handle for a reliable grip. 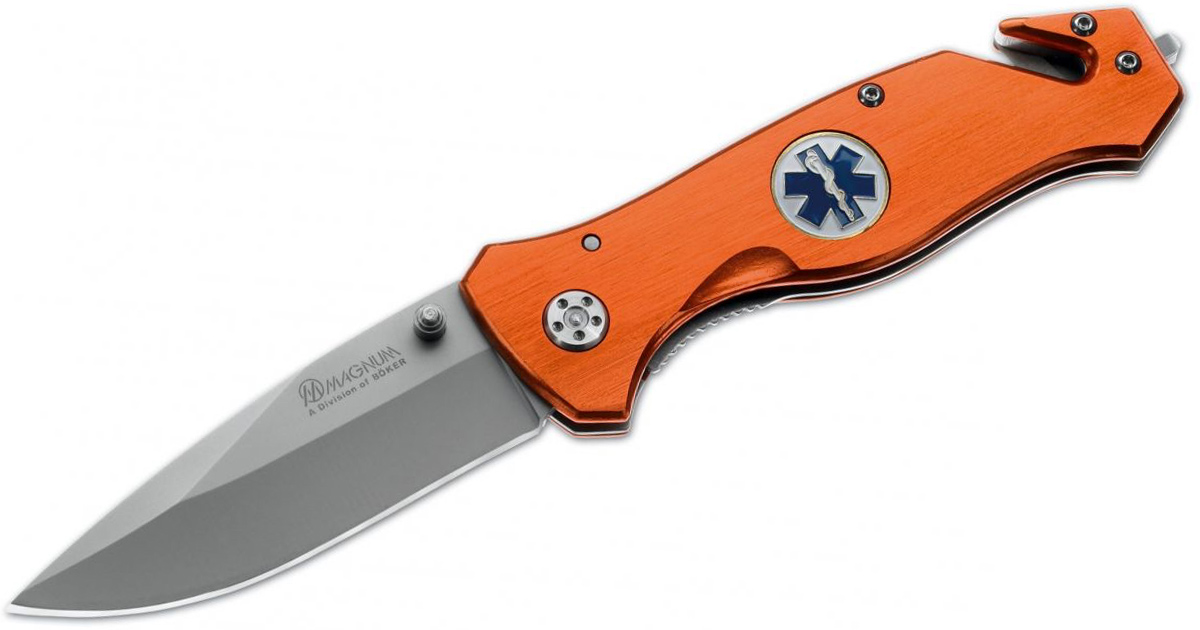 Finally, Magnum by Boker makes a simple yet effective rescue knife for cheap. Like pretty much all the others, it has a partially serrated blade, seat-belt cutter, and glass breaker.

The cool thing about this knife is that it comes in several different versions. There’s the EMS Rescue, Army Rescue, Medic Rescue, Fire Fighter Rescue, Law Enforcement Rescue, and Air Force Rescue. The only difference is color and medallion.