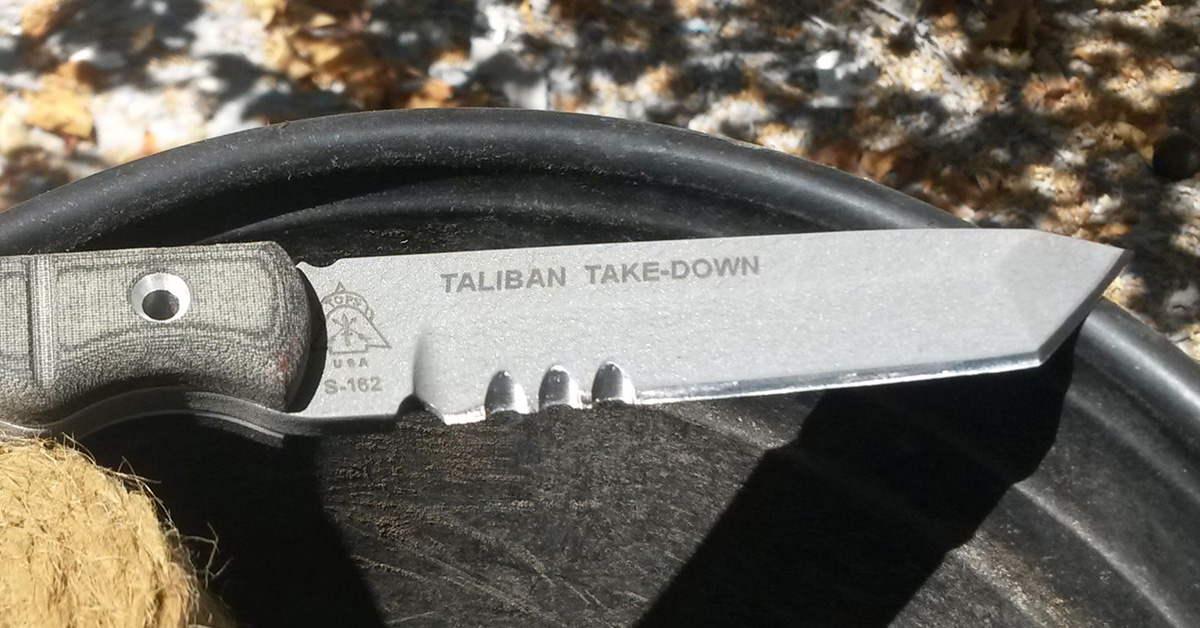 They say a rose by any other name would smell as sweet… but if they were called stenchblossoms or crapweeds, I imagine they would be a bit less appealing.

The same thing goes for a knife. The almost universally acclaimed Ontario RAT Model 1 would still perform just as well if it were called the Ontario Elephant Earwax 7, but it might not be quite as popular.

While I acknowledge naming something is extremely difficult (I considered naming my son Humphrey), it can really kill the whole vibe of a knife. So I scoured the Internet and my memory bank to come up with a list of the worst knife names around. Many of these knives are well-made and perfectly usable but simply have a name that is off-putting.

This is my personal preference, so take that as you will. If you have any to add, let me know in the comments.

Note: I excluded custom knifemakers because they have a little more creative leeway. I also tried to exclude knives with people’s names. For example, I dislike all the Brian Tighe-related pun names (Tighe Rade, My Tighe, Tighe Coon, etc), but it’s the guy’s name so I let them be.

Finally, the LA Police Gear “The Best F***ing Knife” S35VN Every Day Carry Folding Knife (yes, that’s the full name) was considered for this list but I couldn’t figure out whether the overly descriptive and braggadocios name was so over the top it was the best name ever or the worst. I decided to leave it off for now. 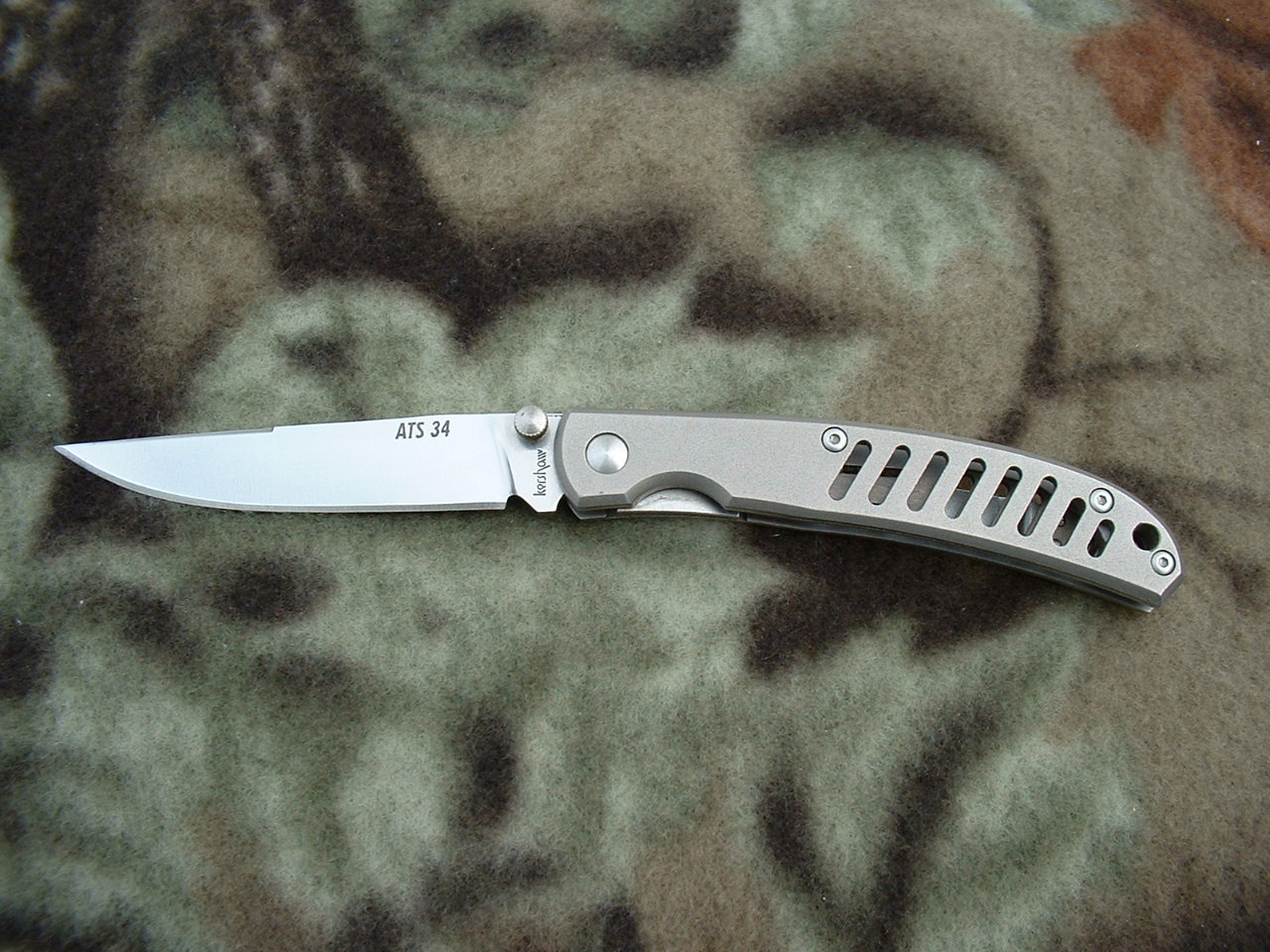 Let’s start with one that’s a bit innocuous: the Kershaw Wild Wild Turkey. This now discontinued knife was actually a well-made and sleek gentleman’s folder. The steel was ATS 34 with titanium handles (if I’m correct). The name Wild Turkey is already a bit silly but the addition of another Wild takes things to another level.

I think Kershaw learned its lesson because future iterations of the knife were simply named Wild Turkey. Still, despite the name, this knife is still sought after by aficionados. 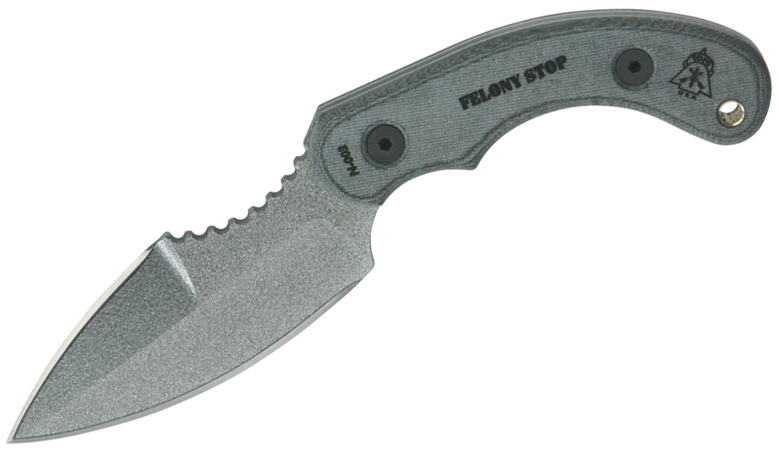 Next we have the first of many TOPS Knives with the Felony Stop. Knives already get a bad rap because of their misuse by a few individuals and you don’t want to call attention to that fact. The name Felony Stop is a bit confusing anyway. Is it supposed to be an instruction to stop a felony or is the knife itself a felony stop? Either way, the knife wouldn’t be so bad if it didn’t say FELONY in big bold letters right on the knife.

The knife, designed by the great Laci Szabo, is said to be only intended for law enforcement personnel and specialists, so take that as you will. 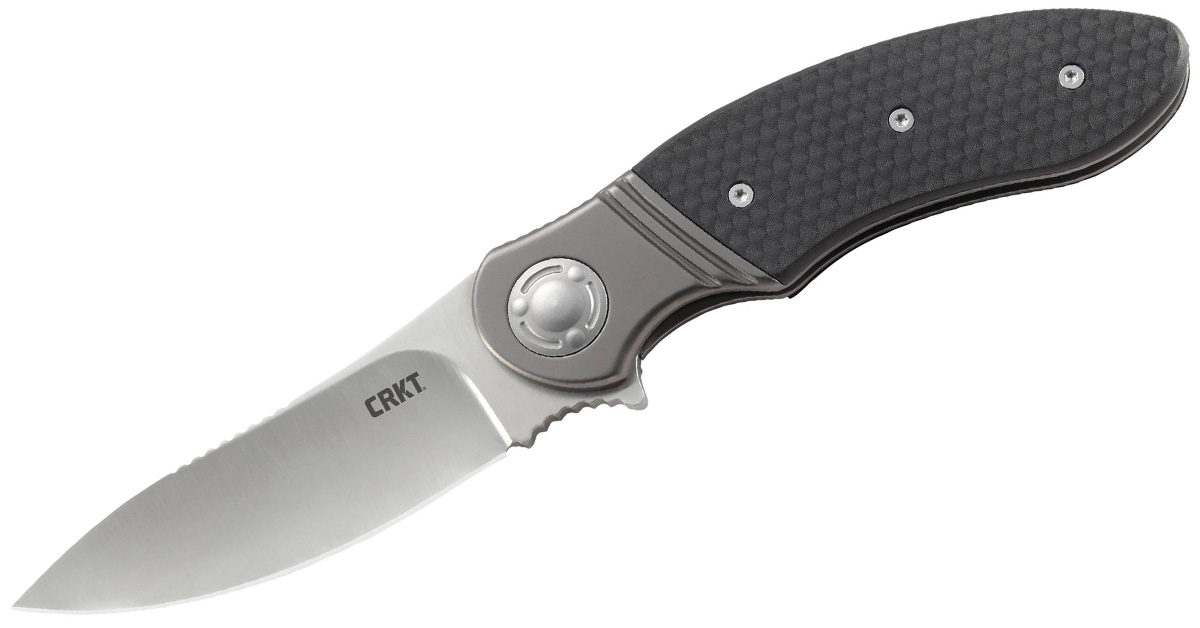 Hootenanny is an Appalachian colloquialism that originally started off as a Scottish word meaning party or celebration. It has since evolved to mean thingamajig or whatchamacallit or doohickey. So when you say pass me that “Hootenanny,” it just sounds funny.

In his review of the knife, Dan from BladeReviews.com tried to delve deeper into the meaning of the name and give it some weight, but there’s not much you can glean, except that it’s just plain inane. The knife itself is actually quite great. 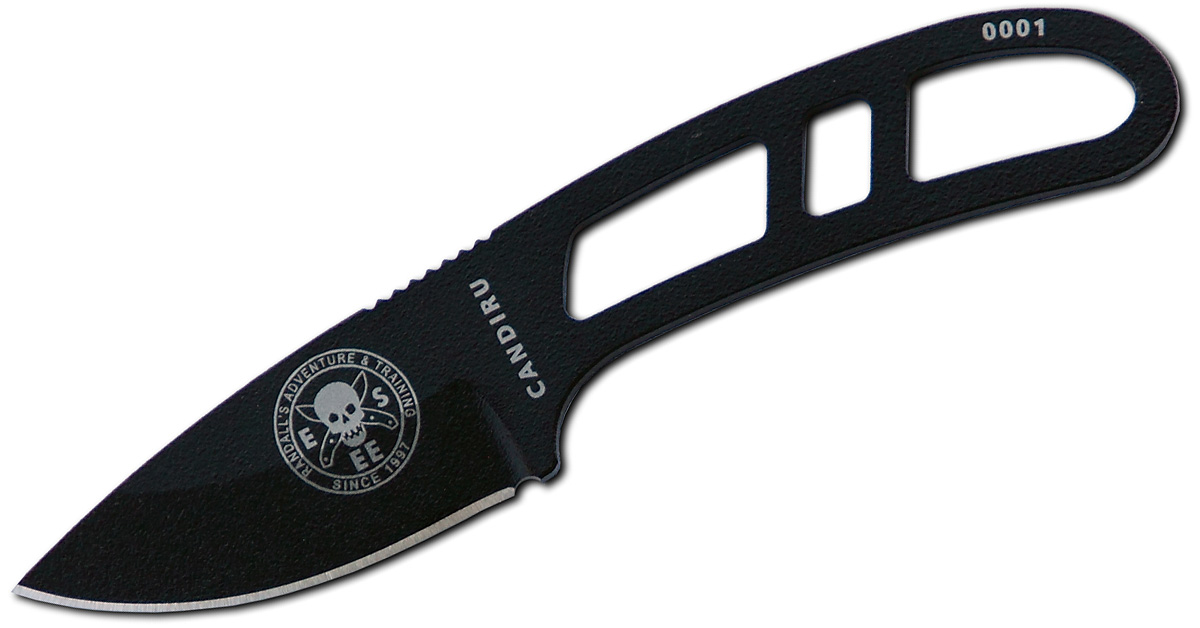 ESEE is not creative when it comes to names. Its most famous collection of knives are simply numbered. There’s the ESEE-6, the ESEE-3, and you can’t forget the ESEE-4! The ESEE Candiru is in line with its other beloved knife, the ESEE Izula (named after an ant), and sounds like a pretty cool name until you do some research or have some prior knowledge.

The candiru is a small parasitic fish commonly found in the Amazon. However, in folklore, the fish is best known for swimming up the male urethra where it attaches itself and sucks blood. Just typing that made me squeamish. While there have been no actual verified reports (although there was one report of it entering a female’s vagina), the candiru’s infamy makes the name a somewhat odd choice. 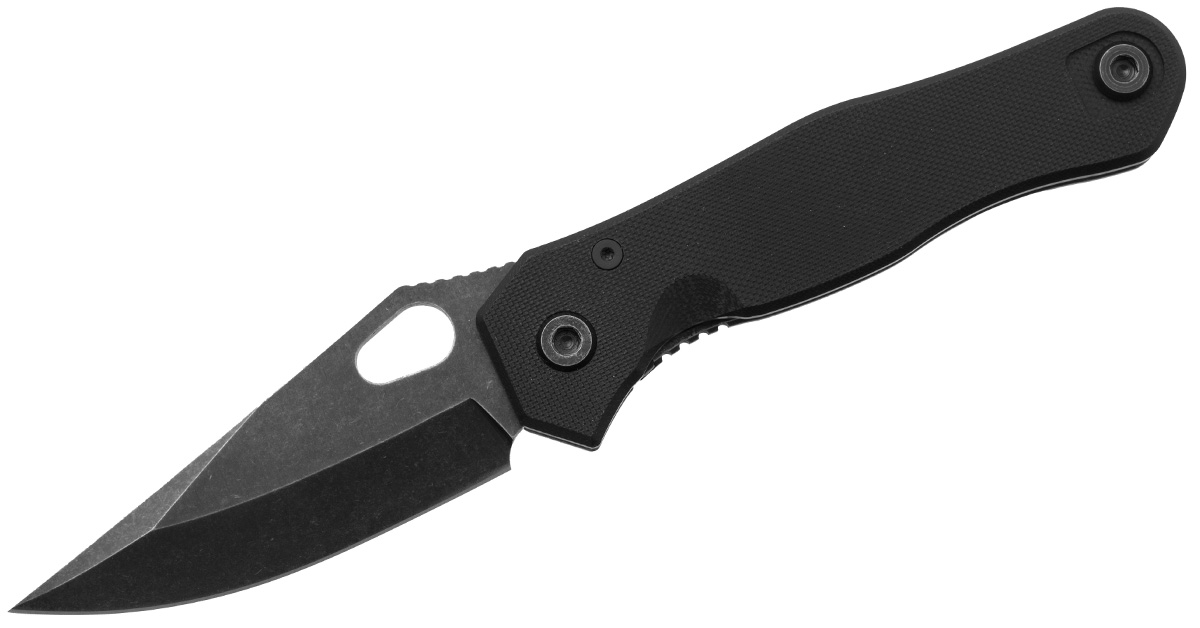 I love ’80s movies and TV shows as much as the next guy, but Quartermaster goes overboard naming its knives after characters from the past. B.A. Baracus is fine, I guess, but Quartermaster went too far with its Mr. Roper designs. In case you’re not familiar with the old show Three’s Company, here is who the knife is named after. 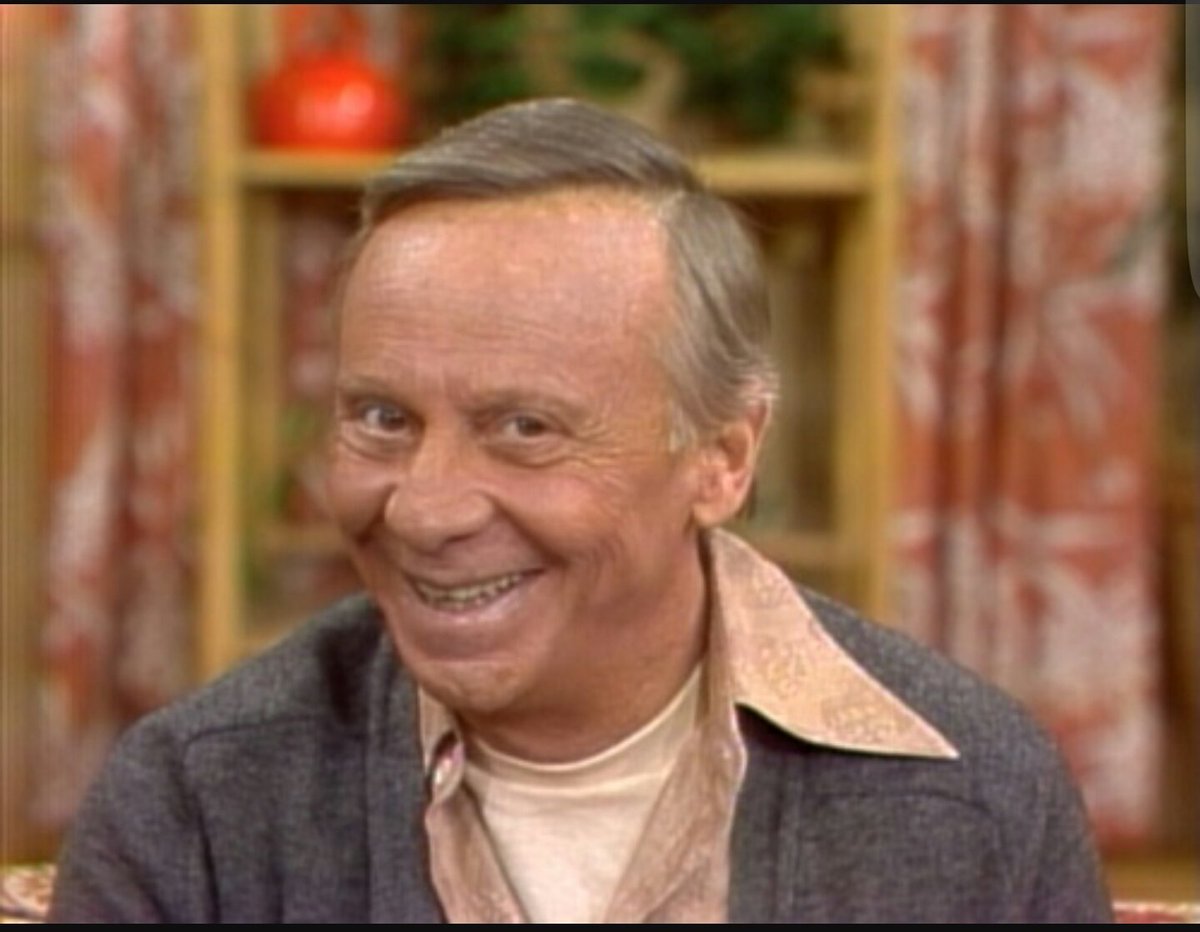 I’ve got nothing against Norman Fell, but it just seems like a strange name for a knife. Honestly, most of these knives are actually pretty good, except for the name. Quartermaster even tried to add a little fun to its Mr. Roper-themed line by making the Mr. Roper “Eviction” model. Get it? Because he was a landlord on television? 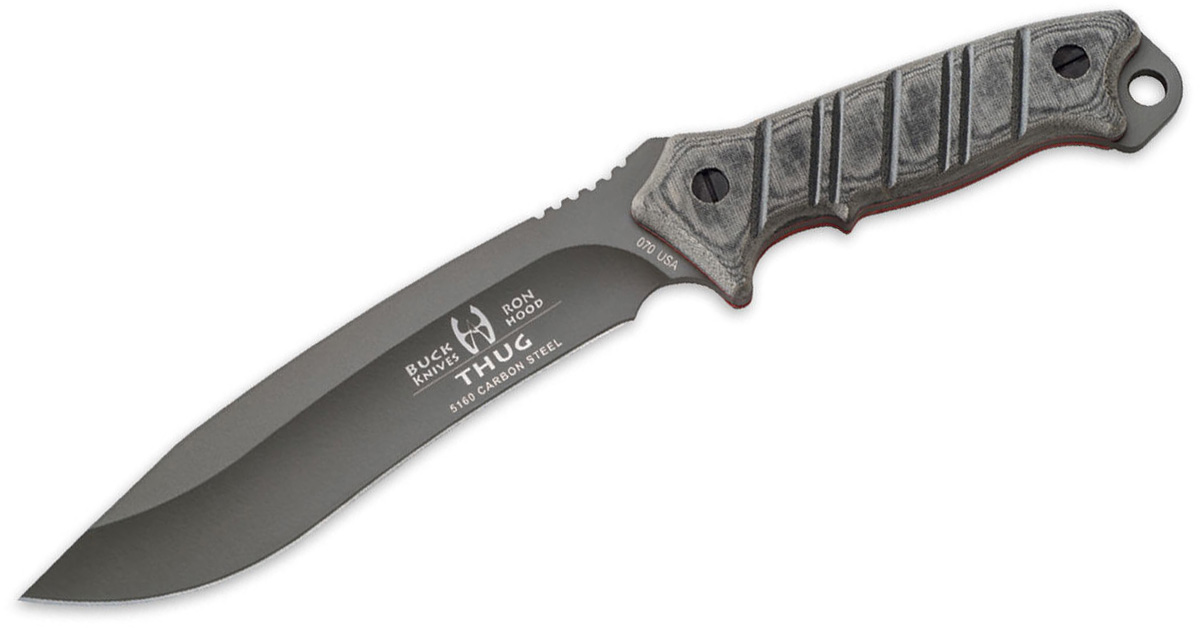 A few years back, Buck Knives teamed up with the late Ron Hood to bring a line of fixed blades with very untoward names based around Ron’s last name. These were the Punk, Thug, and Hoodlum. While I understand these are based around Ron’s name, knife enthusiasts have been trying to distance themselves from being associated with thugs and punks and hoodlums and this only calls attention to it.

On top of the poor choice of names, the knives received pretty bad reviews in terms of the quality control. It’s no wonder these knives are no longer in production. 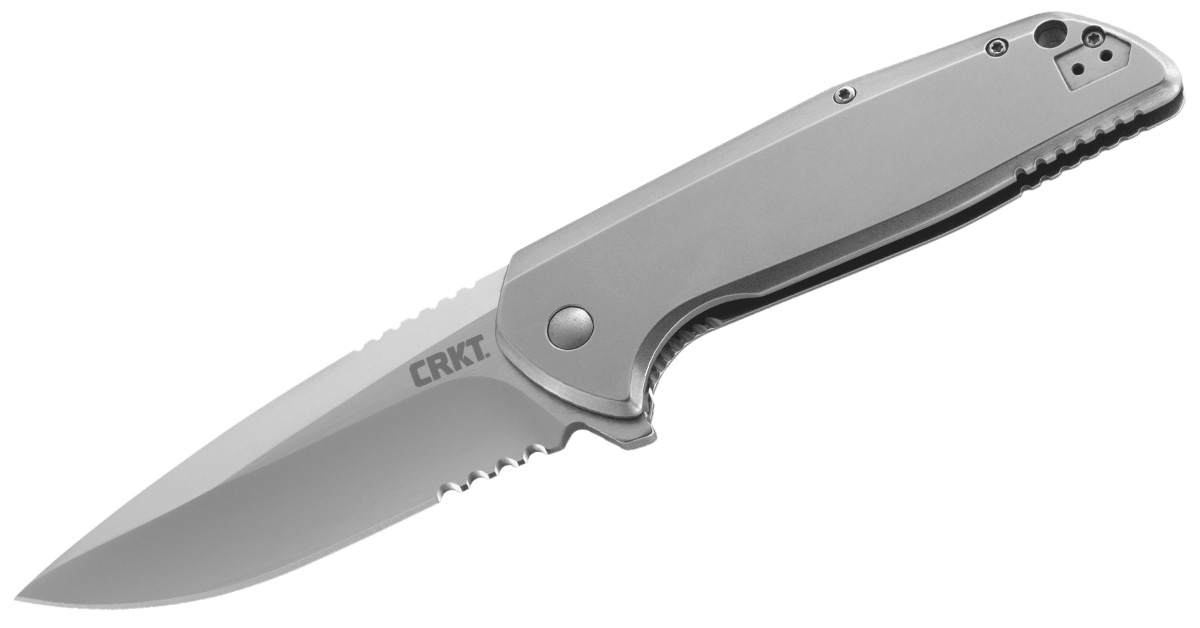 The CRKT G.S.D. gets maligned way too much, from its heavy weight to its strange clip design. While I personally don’t have a big issue with the name, the knife is criticized for its name too much to ignore. The knife originally started as a custom folder from Liong Mah but was eventually picked up by CRKT, which is when the criticism of the name began appearing. Most sites try to avoid using swear words, so you will see a lot of stars blocking out certain letters or see some people call it the “Get Stuff Done” or the G.S.D.

But another issue that arose was the use of the hangtag #gsd on Instagram. Apparently, that’s the shorthand for German Shepherds, so you’ll see a ton of dog pictures with the occasional G.S.D. peppered into the mix. I believe Mah now uses the hashtag #gsdknife to avoid confusion.

The CRKT version was just recently discontinued, but it has been made into a mid tech knife. 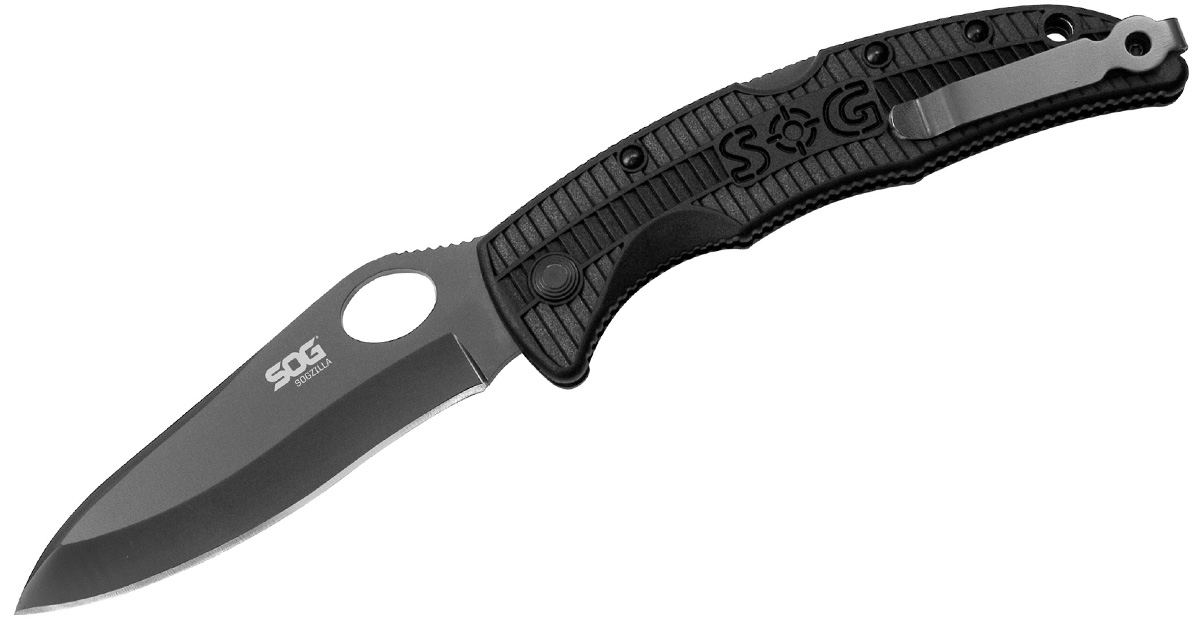 Next up is the SOGzilla from — brace yourself — SOG. The SOGzilla is just a downright silly name for a knife. Sure, it looks reptilian in design, but SOGzilla? It’s even worse when you call it by its full name: the SOG SOGzilla. In the description on the SOG website, the company just calls it the Zilla instead of SOGzilla, which I think would have been a much more acceptable named. It would be more clever to say the SOG Zilla than the SOG SOGzilla. It’s funny how a knife with a strange name like the Griptilian feels so natural whereas SOGzilla feels forced. 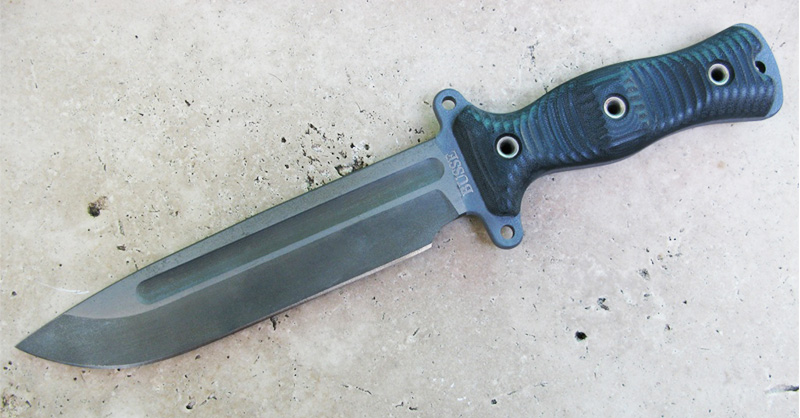 The Busse Electric Light Orchestra, er I mean Team Gemini Light Brigade, is a fixed blade with a mouthful of a name. I understand the limits of my knowledge and thought maybe there was some great hidden meaning to the name but my searches yielded nothing. Team Gemini is the name of a sustainable technology company. Unless I’m missing something, a name like the Gemini Brigade would have been adequate. 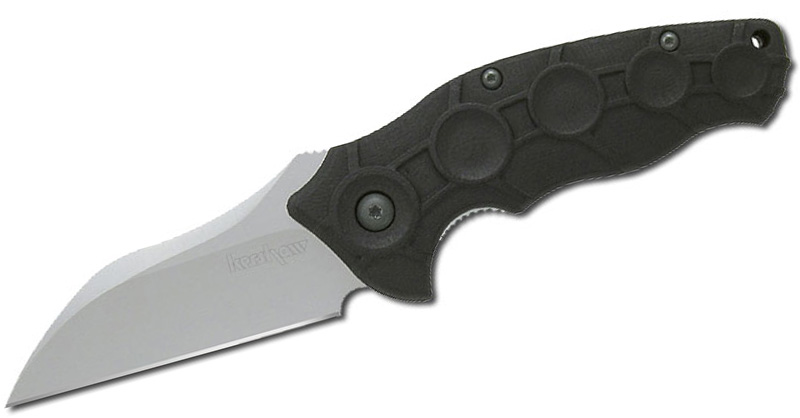 I see where they were going with the Kershaw Needs Work, but the name… needs work. The Needs Work moniker is ripe for mocking, which I did a few months back in a takedown of its aesthetically unappealing pocket clip. The now discontinued model was a typical Kershaw but the name just didn’t have the same pizzaz as something like the Cryo. 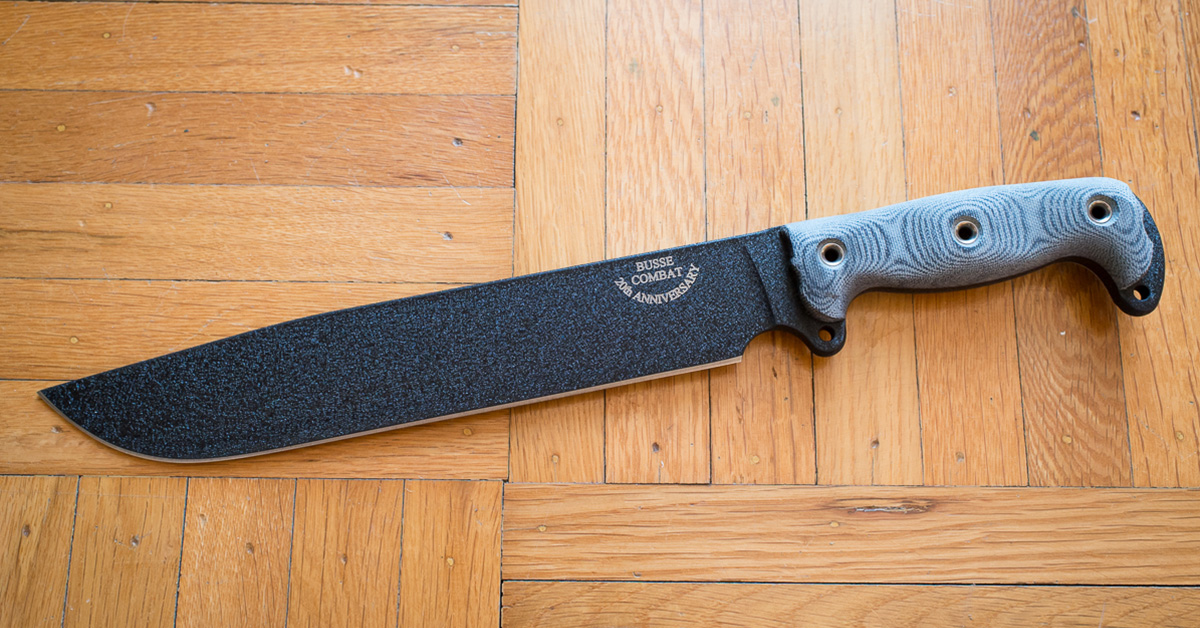 Say hello to my Battle Mistress. Despite being tough and respected tools, knives made by Busse often sound like they were named by a teenager who plays too much CS:GO. 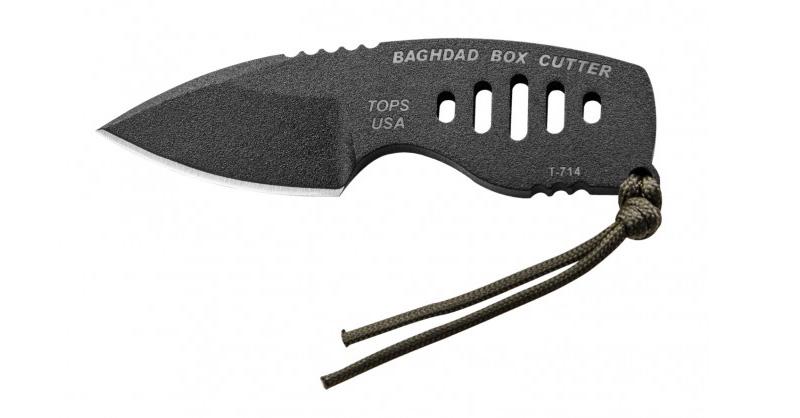 These next two from TOPS are similar to the Iraq JAC in naming but likely elicit an even bigger face palm. The Baghdad Boxcutter is an awful name. While it may be a great knife for military personnel to carry when serving the country, it might be hard to get past the name. 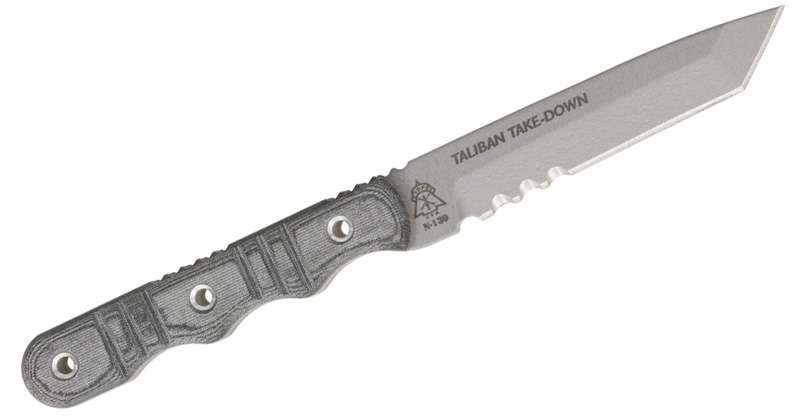 The Taliban Take Down is even worse. I don’t want any knife with the word Taliban in its name, let alone having the terrorist organization’s name emblazoned in large bold letters right there on the blade. 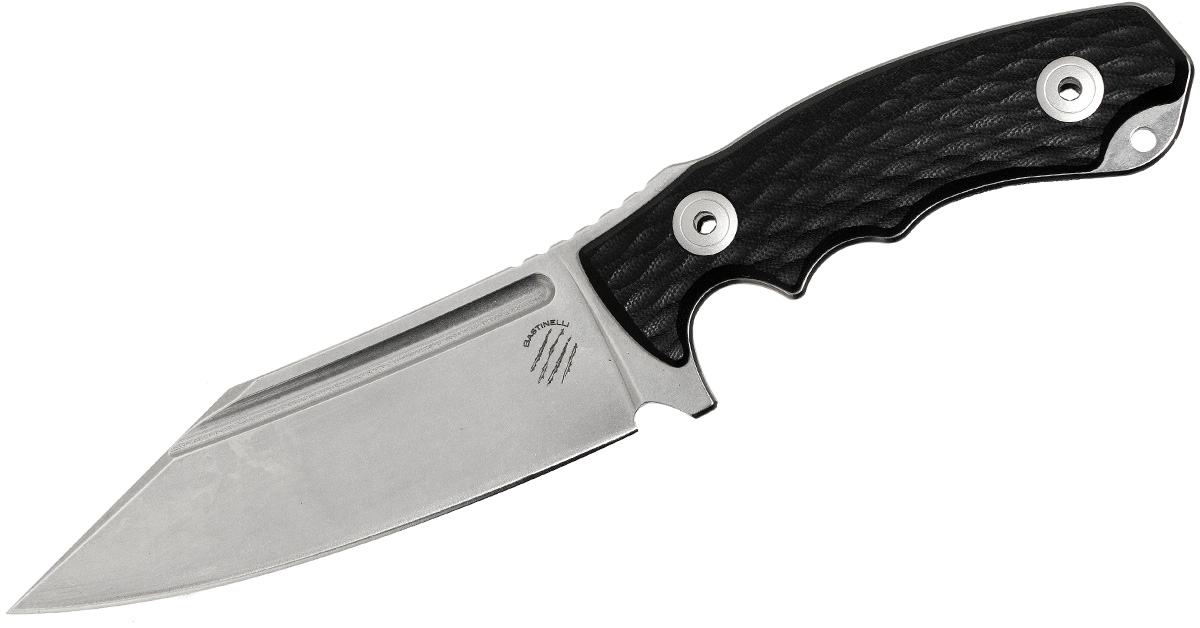 When it comes to mall ninja names that are oozing with badassery (and silliness), the Assaucalypse is near the top. 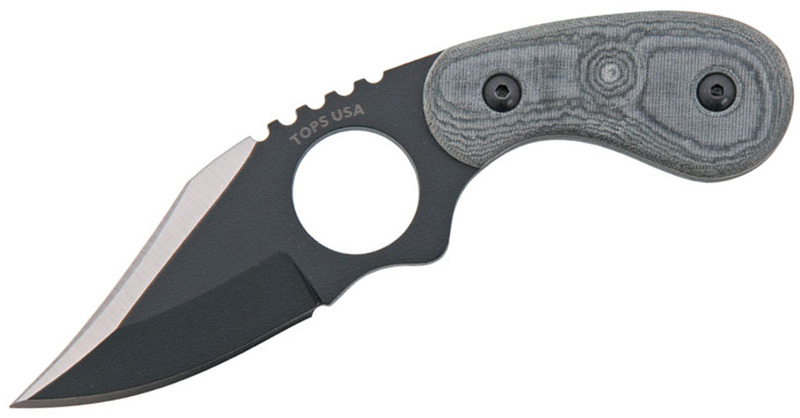 I dare you to say the name of this knife without giggling. Yes, the Cockpit Commander is a name people often mention as one of the worst choices, simply for the fact that it elicits images of other things. There is so much innuendo in the design and description of the knife that this is likely the reaction TOPS was going for. TOPS says “the sharpened upper edge gives the user extra cutting options and also allows for deeper penetration” and the knife features a prominent hole in the middle where you can stick your finger in.

Now we come to one of the most over-the-top knife names out there: the Death on Contact. If that wasn’t enough, Microtech added “Killswitch” to its auto version of the knife. I know criticizing Microtech can be dicey, but this is all in good fun (please don’t sue me, Microtech). The name makes me not want to even touch the knife for fear of being killed. Or it makes me think that the blade is poisoned, as legend says certain people did in battles back in the day. 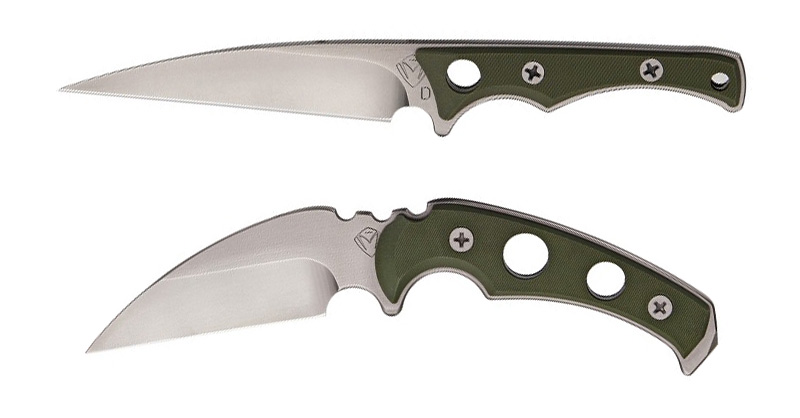 The Medford Slender Utility Knife and Fixed Utility Knife seem like typical knife names, until you see that the knives actually go by the acronyms S.U.K. and F.U.K. There’s no way that was done by accident and I must say it’s a bit of a classless name. I’m not offended by the name and know that some people delight in the puerility of the monikers, but it just seems unnecessary. To each his own, though. 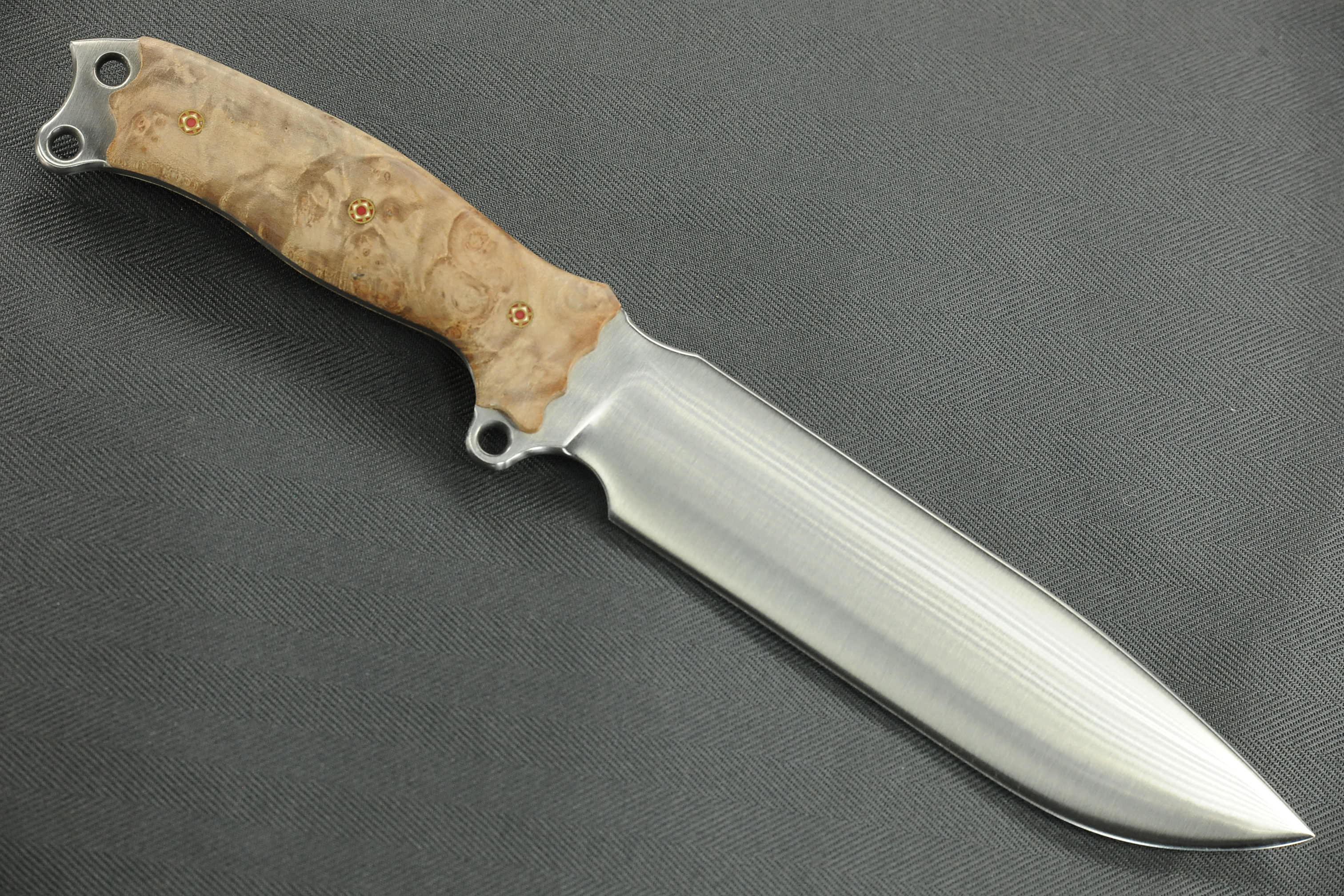 Busse has a lot of ridiculous names but this one takes the cake. The Busse Nuclear Meltdown Special Forces Natural Outlaw, sometimes known as the NMSFNO, is an outrageously long name that’s a grab bag of tactical keywords. It would not have been so cringeworthy had it ended after two words but it just keeps going and going. Fortunately, unlike TOPS, Busse does not put the name on the knife. It would have spanned the entire length of the 8.25-inch blade and maybe even some of the handle. 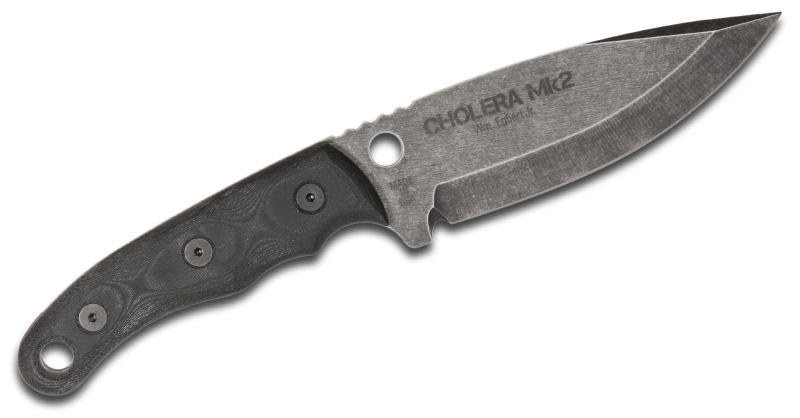 Finally, we come to the worst knife name ever: the Vulture Cholera. Cholera is a bacterial disease that causes extreme vomiting and diarrhea. It can kill people within hours of contraction if left untreated and is responsible for anywhere between 21,000 and 143,000 deaths a year, according to the World Health Organization. It’s been responsible for millions of deaths around the world over the past few centuries. And don’t forget it causes excessive diarrhea and vomiting! An untreated person can produce about 3 to 5 gallons of diarrhea a day!

Naming anything after a truly disgusting disease that infects millions a year is a terrible idea. It would be like naming a knife Colon Cancer or something. The knife is actually well-reviewed and I’m not entirely sure if the name has any impact on sales, but I still think it’s a terrible name.

Again, let me know if I missed any or got any wrong in the comments.