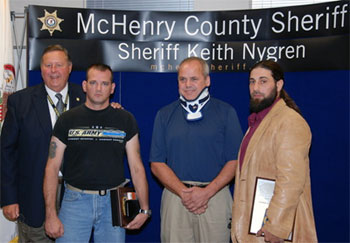 The term “hero” is usually tossed around with careless abandon these days. You might call someone who gets you a shopping cart or someone who finds your favorite pair of pants a hero.

There are certainly a variety of uses for the term, but a true hero is someone who risks their life to save another. That’s why it’s no surprise that the two men in the next post in our series documenting how knives save lives are aptly deemed heroes.

According to the American Knife and Tool Institute, the whole story begins July 2011 on a highway in Illinois where David Kieffer was driving his Chevy S-10 pickup. As these stories always go, disaster was swift and unexpected. Out of nowhere Kieffer’s truck was rear-ended by a massive semi-truck and the power of that thing was tremendous. His truck burst into flames and he was trapped inside the crumpled vehicle.

This is always the pivotal point of a story. There could be so many possibilities. Nobody might stop to help or someone without a knife might stop and end up being ineffective regardless of intentions. Fortunately, unlike many other stories that end in disaster, two heroic men with the right tools were not far away.

Professional stuntman Daniel Narciso and National Guard vet James Halterman were nearby and instantly went to help Kieffer without worrying about getting burned or injured themselves. Since Kieffer was trapped in the burning vehicle by his seat belt, the only thing that could save him was a knife. Luckily, Halterman had his reliable Gerber Covert 154CM knife on him.

They courageously cut Keiffer out of the truck and pulled him to safety. The truck ended up burning pretty badly, which could have potentially been Kieffer’s fate had Narciso and Halterman not been at the scene with a durable Gerber knife.

In Sept. 2011, the two men were honored for their heroism and were given Citizen Lifesaving Awards (which include a plaque and a medal). At the ceremony, Halterman was also reunited with his knife that was recovered from the burning wreckage of the vehicle by firefighters. Gerber put it in a frame for Halterman and also gave him another brand new knife to thank him for his heroism.

It goes without saying that knives are a useful tool to have near you at all times. Whether you see an accident or you need to be saved from a hairy situation, knives are important tools in the fight against disaster.