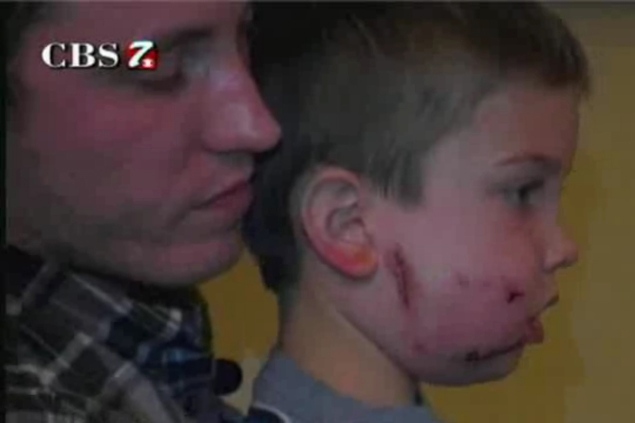 Danger always seems to pop up when you least expect, like when a burglar bursts through your door late at night or when you get into a terrible car accident on the way home. While you can rarely predict when danger strikes, it doesn’t mean you shouldn’t always be prepared.

Take the Hobbs family in Texas, for example. According to the Daily News, the family was recently walking on a sidewalk between a restaurant and a lodge in the Big Bend National Park while enjoying the outdoors. Six-year-old Rivers Hobbs walked with his mom and dad, completely unaware of what was about to happen.

Creeping up on the family was a lost and very hungry cougar who waited for the perfect moment. Then, he pounced.

With little warning, the cougar lunged at the small boy and clamped down on his face. Seeing your child on the ground with a cougar mauling his face is probably unimaginatively frightening. It’s this point when the fear and shock could be too debilitating to help. Even a few seconds in the grasp of a hungry cougar is life-threatening.

But, without hesitation, Rivers’ father Jason Hobbs sprung into action, pulled out his knife and stabbed the beast in the chest. The animal immediately let go and skulked away.

The boy, who had a few gashes and puncture wounds on his face, was rushed to the hospital and stitched up. Aside from a few scars and a gnarly story, he’ll be perfectly fine.

Like any hypothetical question, it’s difficult to determine what would have happened had his father not had a knife in his pocket. A few punches to the cougar probably wouldn’t have gotten it off so easily, possibly resulting in more serious injuries to the boy.

Many demonize and attack knives for being deadly weapons, but it’s not the tool that does the harm. When put into the right hands, a knife could be a life-saving tool.

And, for all those out there in Texas, the cougar was not captured and had attacked other campers earlier in the day. Let this be a warning for you to always carry a knife and be prepared for the unexpected.

Teen fights off burglar by hitting his head with sword

Repurposing Knives and Guns for a Sustainable Cause