Maine legislator pushes for switchblades for those with one arm 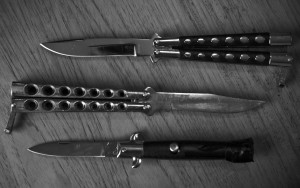 Maine State Representative Sheryl Briggs is mounting a campaign to legalize switchblade knives for individuals with one arm.

The proposal is similar to a federal law that exempts those with one arm from the prohibition of switch blades of 3 inches or less.  The reasoning behind the push, quite simple: it’s hard to pry open a normal knife with only one arm.

According to Briggs, one-armed lawyer Paul Dumas Jr. asked her to introduce the bill.

It gets tough to open up a knife one-handed. I use my teeth sometimes, and that isn’t very safe, Dumas said.

A House committee plans a hearing on the measure next week.

The effort is one of many to decriminalize certain types of knife possession.  Last month, I blogged about the recent efforts of the knife advocacy group Knife Rights Inc. to ease knife restrictions.   In May, the group led the way in successfully repealing a New Hampshire law against switchblade possession.