Bob Dozier KM-17 Freedom Fighter, a similar version to the one used to stop the bullet.

When U.S. Army Staff Sergeant Ned Clysdale handed down a knife to his son, he never imagined that it would be the only thing stopping a bullet from potentially killing his son.

This story, which first appeared in the December 2013 issue of Blade Magazine, is an amazing example of how knives save lives in many different ways. Ned Clysdale is a big fan of Bob Dozier knives and had four, including a Bob Dozier Freedom Fighter.

When his son, U.S. Marine Lance Corporal Josh Clysdale, was being deployed to Afghanistan, Ned passed down the Freedom Fighter and another Dozier. 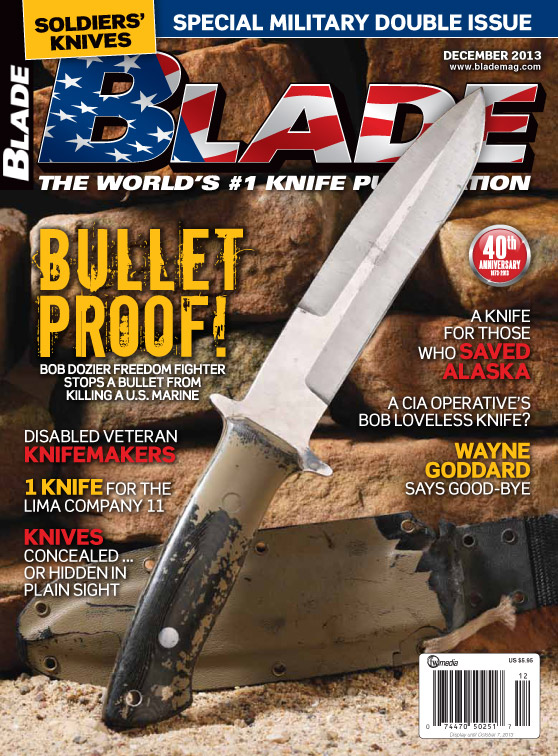 This is the actual knife. More images can be see in the issue.

The knife quickly became a favorite of Josh and he would use it during minesweeping operations. It wasn’t until April 2012, a little more than two months into his tour, that the knife would claim the title as lifesaver.

According to the article in Blade, Josh was scouring a poppy field with a patrol when the unit began taking fire. The firefight was long and intense and they were eventually taking fire from two sides.

Here’s what happened next:

“My fire team was the rear element, and at this point I was pinned down with accurate fire with dirt kicking up all around me. I started engaging the enemy with my rifle, and was shot in the right leg,” he says. “I don’t remember getting hit with the other rounds”—there were four total—“but I heard another burst of machine gun fire close enough to me that it actually deafened me temporarily, so I threw myself farther down the wadi for more cover. My knife was attached to my body armor between the chest plate and my right side plate. The bullet it stopped would have gone into my lungs.”

The Dozier Freedom Fighter took a bullet for Josh who could have easily been killed by the bullet. Josh was still injured, but things could have been much worse. Eventually Josh was evacuated and began recuperating from his injury.

This isn’t the first knife to stop a bullet and save someone’s life, but every time it happens, you can’t stop and marvel at the sheer luck of having the knife in that exact spot.

You can see this as sheer luck or divine intervention, but this should be a case for everyone to carry a knife because you never know when it’ll save your life.

The full article can be found in the December 2013 issue of Blade Magazine and we highly recommend you read the whole thing.