Knives Save Lives: An Unconventional Use 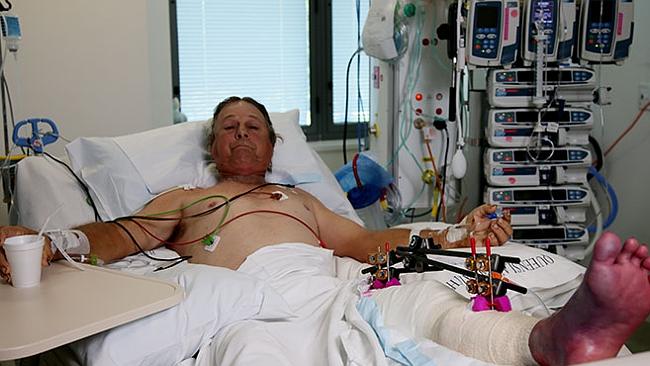 There’s blood pouring out of your leg, which is trapped under a several ton tractor. Nobody will notice you’re missing for the rest of the day and the only thing in arm’s reach is a knife your father gave you long ago. What do you do?

Barry Lynch, a 54-year-old Australian farmer, was faced with this life-or-death situation earlier this month when the drawbar on his crop sprayer collapsed onto his leg, leaving a gaping wound.

We’ve seen situations like this before. Early on in the series of Knives Save Lives, a logger had his tractor trailer collapse on his leg, leaving him trapped. Another incident involved a farmer whose arm was trapped under a piece of heavy machinery. In both these instances, the men had to use pocket knives to painfully cut off their limbs—a truly harrowing experience.

But instead of using the knife as it was intended for—to cut—Lynch used it to start digging. For six longs hours, as the pressure in his leg was building to a painful crescendo, he continued digging at the hard earth with his knife.

Here’s more from his sister interviewed by the Stock Journal:

“The swelling was getting so bad his skin was starting to crack on his leg,” his sister Susan Lundon said.

“He was nearly tempted to stab himself in the leg with the knife to let the pressure out … but just as he was getting ready to do that his skin burst. He’s blown a hole probably the size of your fist.

“He said it was just sheer relief, because it released a lot of pressure … but then the blood came.

After six and a half hours, he managed to dig a trench big enough to slide his injured leg through. Once free, he grabbed his cellphone from the tractor, called the paramedics and was airlifted to a hospital.

It seems very likely he’ll be able to keep his leg and make a full recovery, proving this guy has some true grit.

I don’t do much manual work for a living nor do I have any desire to do it but I have the utmost respect for these hard workers. Being a farmer, a logger or participating in countless other physically demanding jobs is filled with dangers and pitfalls, but heavy machinery seems to be one of the biggest dangers out there.

According to the National Agricultural Tractor Safety Initiative, tractors themselves kill hundreds of people annually. The causes of death include everything from tractor overturns to entanglements.

To all you hard laborers out there doing the tough jobs that make society function, we salute you. Stay safe and always have a knife by your side.