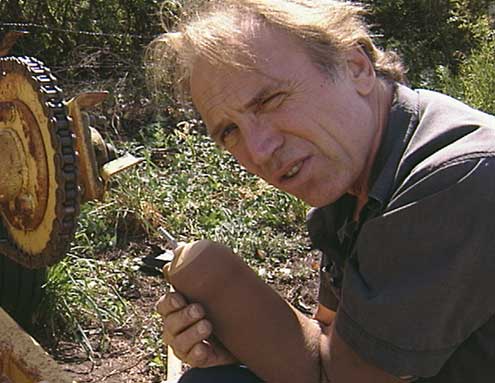 On June 5, 2003, Canadian farmer Bruce Osiowy was getting ready for another hot day in the field using his new machine that picks up rocks, which he used to have to do by hand.

However, what started out like another day on the farm would soon turn into a harrowing 66-hour ordeal for Osiowy.

After picking up a few loads of rocks with his machine, the transport arm of the rockpicker malfunctioned.

So, he tried to release the transport arm with a wrench, but when he did, the whole thing came crashing down on his hand.

Despite screaming for help and banging a hammer against the machine, no one came to his aid. He was stuck all alone in the middle of the field on a Thursday night.

For the next two and a half days, he went without food and water. At night when it grew cold, his collie dog would curl up on top of him to keep him warm.

By Friday, he was beginning to think of ways to free himself because no one was coming. That’s when he pulled out none other than his trusty Swiss Army knife. He proceeded to slice through his fingers with all the tools from the saw to the scissors, but the pain was so unbearable he had to stop.

Eventually the lack of food and water made him hallucinate, and it’s that hallucination he attributes to his ability to cut his fingers off to save his life.

According to interviews after the incident, he said he thought he was at a Mexican barbecue:

“I was cutting this beef apart and it was a horrendous job to just hack it apart. Finally another fella said, ‘I’ve got a hand and an arm for you’ and he gave me that,” he recalled.

“I decided I was going to cut the two fingers off that borrowed hand. I was cutting the fingers on my own hand there was no doubt about it. There’s no doubt that the hallucination was a big assistance to getting this job done.”

He escaped after 66 hours of being trapped, but doctors had to amputate the rest of his hand. Today, he’s still farming and using his story as a cautionary tale for other farmers.

There’s no doubt his Swiss Army knife saved his life because had he been trapped any longer, he would have died of dehydration. Without the knife, he wouldn’t have been able to remove his fingers and dislodge his hand.

Although farming might not be on your list of most dangerous jobs, it actually leads to many deaths each year. Whether it’s a farmer getting gored by a bull or getting crushed by a manure spreader, farmers are always at risk.

There are many things farmers can do to prevent accidents, but carrying a knife is essential for worst-case scenarios like this one.

The Canadian Federation of Agriculture is trying to raise awareness about the plight of farmers, so check out this video they made of Osiowy’s ordeal.