Top 5 Coolest Movie Swords (That You Can Own) 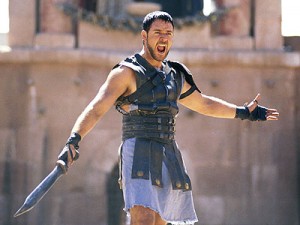 Last week, I posted the Top 5 Movie Knives (That You Can Also Own), and, as promised, here is the next installment: the top 5 coolest movie swords (that you can own).

There are a few arbitrary rules I set for qualifications. Firstly, the sword has to have appeared in a feature film. Secondly, you have to be able to buy it either as an officially licensed or unofficial replica. Finally, it has to be awesome.

There are undoubtedly many movie swords that deserve to be on this list, so if you think I missed one, feel free to argue your addition in the comments section.

Without further ado, here are my top 5 coolest movie swords (that you can own).

Ned Stark’s bastard son, Jon was raised at Winterfell on near-equal footing with his siblings. After joining the Night’s Watch he served as steward to Lord Commander Mormont. Instead of joining Robb on the battlefield, he remained up north to honor his vows to the Watch. While traveling beyond the Wall with the Lord Commander, he was separated from the rest of the group.
The Game of Thrones Longclaw Sword of Jon Snow was painstakingly recreated from the actual props used on HBO’s hit fantasy epic Game of Thrones. The officially licensed collectibles are made from the highest quality materials and have been crafted with special attention to reproduce the authentic details found on the props.  Each sword is serialized and will come with a wall mount and a certificate of authenticity. 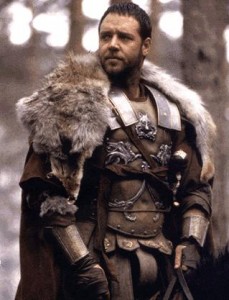 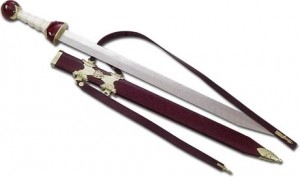 With the release of The Gladiator in 2000, we witnessed some of the gritty battles that took place in ancient Rome. The most impressive battle of the movie was at the very beginning when the main character, Maximus, leads his forces against Germania. In the scene, Russell Crowe uses a beautiful sword with a scabbard that fits around his shoulders. There are several types of unofficial replicas on the market, but all of them have about a 30’’ blade, an ivory handle and come with those really cool straps. 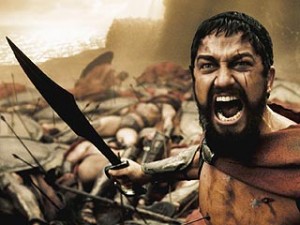 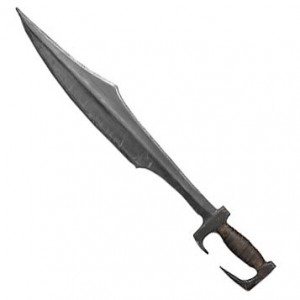 Say what you will about the violence in 300, but the movie spotlights a lot of exceptional weapons. The Sword of Sparta is prominently featured in the film with its unique shape and rugged appearance. The authentic replica is 34 1/4” overall and has a 27” blade. It also comes with a hand guard, so you can wield it easily.

3. Captain Jack Sparrow’s Cutlass from The Pirates of the Caribbean 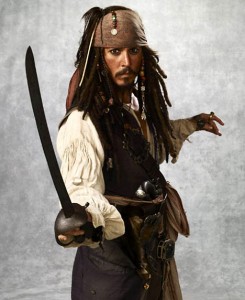 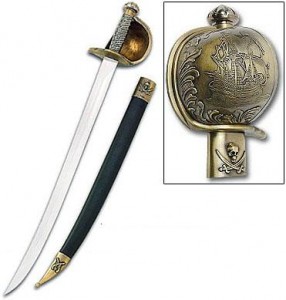 It’s impossible to compile this list without having at least one cutlass, since there were so many movies with great cutlasses. For this we turn to the craggy Jack Sparrow, played by Johnny Depp, from The Pirates of the Caribbean series. Throughout the films, Sparrow is never far from his trusty cutlass that he uses in numerous battles. The great thing about the authentic replica is its sturdy construction and wear marks, so it looks weathered. The sword is about 30” and also comes with a display. 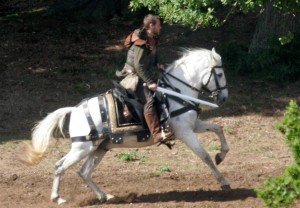 Even though Robin Hood may be known for his bow and arrow, the most recent edition of the Robin Hood story featured a truly awesome sword. Our second Russell Crowe movie shows a huge battle on the beaches of Dover with Robin Hood wielding his huge sword on a horse. The officially licensed sword of Robin Hood measures 40” with a blade of 33” made out of high carbon steel. The sides are engraved with two phrases: “Rise and Rise Again” and “Until Lambs Become Lions”. The Lord of the Rings is a trilogy of epic proportions featuring a slew of cool looking medieval weapons, such as Frodo’s Sting sword and Gimli’s iconic axe. However, none of those weapons match the impressiveness of Aragorn’s heroic sword used in the final chapter of the series. In the film, the legendary sword is used to summon the army of the dead and battle countless orcs.

The officially licensed Anduril Sword of Aragorn is made at a massive length of 52 7/8″ overall with a blade measuring 40 5/8″. It features an inscription in Tolkein’s language of Quenya and a leather-wrapped steel handle. It also comes with a plaque that has the symbols of the Kingdom of Gondor. This sword is a must-own for any collector of awesome movie replicas.