A Brief Guide to Swords

We’re writing about swords all week in conjunction with our first Cutting Edge product give-away. Comment on this post or any other between today and midnight on Sunday and you’ll be entered to win a 54-inch Scottish Highlands Claymore sword.

If you are one of the first ten people to comment on any individual post, you’ll get DOUBLE ENTRIES.

Throughout the world, millions of different types of swords have been forged for a number of purposes, including battle and ceremonial garb. Amazingly, when swords are forged by hand, they are unique in many ways.  To build on our theme of swords, I’ve decided to create a brief guide of swords. Even though there are hundreds of types of swords, I’ve separated the swords by region.

There are two main categories of Chinese swords: the dao sword and the jian sword. The Chinese dao swords (pictured right) first appeared during China’s Bronze Age and have several distinct characteristic. They usually have a slightly curved single-edged blade with a handle that curves in the opposite direction to give maximum control. They were ideal for thrusting and slicing during battle. The second important Chinese sword is the jian sword. Unlike the dao, which is known as the “General of All Weapons,” the jian is known as the “Gentleman of All Weapons” because it is a very simple double-edged sword.

The other type of major Asian sword is the Japanese nihonto. The type of sword that falls under this category is the well-known katana, which samurai warriors used to carry in the 15th century. The common trait of nihonto swords is their long, single-edged blade. It was fairly standard-sized compared to the range of the other Japanese swords and had a long handle, so it could be held with two hands. If you’re really interested in Japanese swords, I recommend looking into the other types, which include odachi, tachi, nodachi, tsurugi and wakizashi. 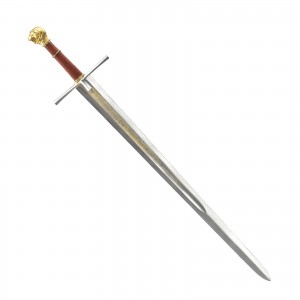 There are a ton of sword-types from Europe, so I’m not going to go into full detail since several scholars have already spent their time carefully categorizing each type. Instead, I’m just going to focus on a few types that are interesting and pretty common. The first type is the longsword, which was used during Medieval times and featured a massive double-edged blade. Some of the common longswords had to be carried with two hands to ensure usability and is the type of sword you’d see in The Lord of the Rings. 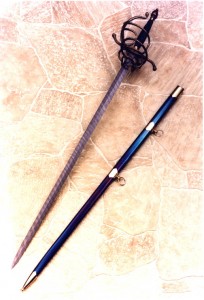 The next major type is the rapier. The design of the rapier, a long narrow blade with a sharp point, makes it perfect for thrusting. In fact, most blades are not sharp except at the end of the blade. Another important element of the rapier is its intricate hilt design that protects the hands during battle. From the rapier, you also get the smallsword and the epee, which are mainly used as fencing weapons and decorative garb.

Another predominantly European type of sword is the backsword. The swords that fall under this category include claymores, cutlasses and basket-hilted swords. The feature of these swords is single-edged blades with a thick back to help support it. Like the rapier, these swords also have complex hilts, because they were often used by European cavalry, specifically Scottish clans.

You’re probably least familiar with African swords simply because there aren’t very many. According to Wikipedia, there are only nine recognized swords and none fall under major categories. One of the most interesting types of African swords is the khopesh, which came from Egypt. If you’ve ever seen “The Mummy,” the soldiers carry these swords that resemble sickles. The swords have a unique design with a somewhat circular blade that was used more for disarming opponents than slicing them. 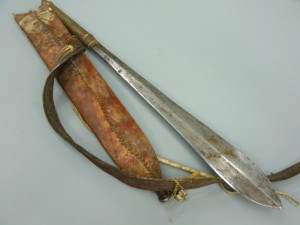 Another sword called the ida is used by the Yoruba people of West Africa. It’s distinctive because its blade goes from being narrow at the handle to thicker by the tip. Legend also said that the Yoruba people added peppers or poison to the blades in order to make the slice more painful and deadlier. In general, the ida is extremely keen making it perfect for multiple purposes, such as hunting, battling and quotidian cutting.

Similar to Africa, there aren’t very many prominent or recognizably American swords. The main reason is by the time the Americas were colonized, modern weaponry was already advanced. However, there are still a few notable swords from the region. The only recognized sword from America, according to Wikipedia, is the macuahuitl. This sword was used by Aztecs and made from volcanic glass and obsidian (in the mode of flintknapping). Although the macuahuitl was more like a wooden club with sharp fragments sticking out of the sides, some say it was sharp enough to decapitate a man.

The other American swords are mainly collectibles made from existing styles, typically European styles. For example, US Civil War swords are essentially the smallsword types I wrote about earlier. Other swords made for the United States are mainly designed for military ceremonies.

Tell us what sword category you like most by commenting below and you’ll be entered to win a 51-inch William Wallace sword. Good luck!