Top 5 Movie Knives (That You Can Also Own) 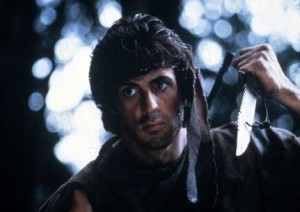 Movies provide us with a variety of long-lasting cultural tidbits, from famous quotes to iconic costumes. However, some movies have knives that transcend the fantasy of the big screen and enter the commercial market because of their overall impressiveness. That’s why I’ve decided to create a top 5 list of most memorable movie knives.

While there are many notable knives that appear on the big screen, I’ve decided to make this list only include knives (swords will get their own list) that have become so iconic that they are now commercially available. If you think other knives deserve to be on the list, feel free to leave your thoughts in the comments section. Here we go.

In the four Rambo films, main character John Rambo was never far away from his trusty survival knife. His knife was instrumental to his success in the first movie when he used it to carve weapons, make clothing and hunt wild animals. Rambo’s knife was so recognizable that it spawned multiple versions, including this limited edition Rambo 1 complete with Sylvester Stallone’s signature. It’s definitely a must have for any Rambo fan.

In Crocodile Dundee, the main character is a rugged Australian brought to the city where he must learn to live in a different type of jungle. The most memorable scene of the movie shows Dundee being by a man with a switchblade. Dundee pulls out his huge knife and scoffs at the robber’s smaller weapon. At the sight of Dundee’s huge bowie knife complete, the robber flees. Though there aren’t official versions of the knife for sale, there are many replicas out there.

For the 20th anniversary of this sci-fi Arnold Schwarzenegger movie, Master Cutlery released a 20-inch machete carried throughout the film. This weapon is a great collector’s item for anyone looking for movie replicas.

The 2010 version of The Expendables starred two of the previous three actors, Schwarzenegger and Stallone, among other famous action heroes as a group of mercenaries sent down to infiltrate a South American country. Knife maker Gil Hibben designed a sleek bowie knife specially for the movie. The official licensed replica comes with an ivory handle, a gold-plated catcher and a sheath.

Though the movie starring (who else but Stallone) was widely panned by critics, it gave us one of the most memorable looking movie knives. The knife, which was carried by the Night Slasher, was personally commissioned from Herman Schneider because Stallone wanted an unforgettable weapon. It features a curvaceous blade with a knuckle guard that has ten metal spikes. The officially licensed version of the knife also comes with a black wood display with the Cobra’s emblem.

Teaching Children How To Use Knives