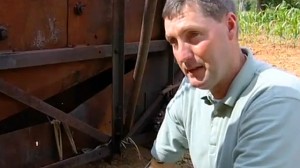 After watching the film 127 Hours about Aron Ralston and posting on the astonishing case of doctors having to amputate a man’s legs with a Swiss Army knife, I became fascinated with the concept of life-saving knives.

It’s no secret that knives are extremely helpful in everyday life, but there are also many examples when carrying a knife has saved someone’s life or prevented them from being significantly injured. Occasionally, I’ll be posting examples of these gripping tales I find around the web.

Although not all examples of knives saving lives involve amputations, the story of Sampson Parker was so amazing that it’s the first story we’re looking at.

Sampson Parker, a farmer from South Carolina, found himself in a terrifying life-or-death situation a little more than three years ago when a corn stalk became lodged in his giant mechanical picker. He mistakenly tried to get it out with his hand, which was instantly sucked into the machine.

His first idea was to simply pull as hard as he could until his hand would get loose, even if it meant literally pulling his hand off. Unfortunately, that’s when the situation turned even uglier.

Since the machine was no longer turning, the picker was giving off sparks and within seconds the stalks burst into flames all around him. He said he could see the skin on his trapped arm melting off like the wax of a candle. That’s when he pulled out his pocket knife and began cutting off his arm.

Although the pain was nearly unbearable, he managed to cut through the nerves and break off the bone to escape. He spent the next month in a hospital recuperating.

Sampson Parker is without a doubt one of the toughest guys out there, but there’s a big possibility that he would have burned to death had he not been carrying his pocket knife. If you’re interested in hearing more about Parker’s story, the BBC recently broadcast a documentary about him which is available on YouTube.

Has a knife saved you from a dangerous situation? If so, we’d love to hear about it. Please contact me at [email protected]

Top 5 Coolest Movie Swords (That You Can Own)