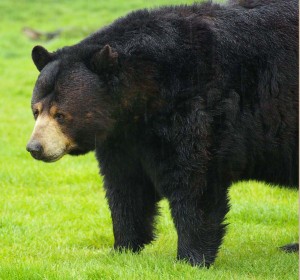 Whereas some of the previous examples about how knives have saved a person’s life prominently feature amputations, the man in this story used a knife as a weapon for self-defense. What he was defending himself against, however, was a huge black bear.

In 2006, Tom Tilley, a then 55-year-old outdoorsman from Canada, went on a 12-day canoeing trip with his trusted dog Sam. While walking on a trail about 4 days into the trip, he came across a 200-pound black bear.

Annually there are between 1 and 2 bear attacks a year, so this isn’t really an uncommon experience. So, Tom did what you are supposed to do when you encounter a bear, he waved his arms and slowly back away.

Nevertheless, the bear was hell-bent on attacking and continued his march toward Tom. He described what happened next to the CBC news:

“That’s when I knew I had a serious problem.… I was lunch,” he said. “The bear took a few steps down the trail and clamped its mouth on the back of my dog. It gave me the quick opportunity I needed to run around to the back of the bear, get on its back and with my knife start stabbing it.”

The bear first attacked Sam, an American Staffordshire terrier, which left Tom with two choices. He could have easily left the scene and potentially been mauled by the bear while fleeing, or he could have defended Sam by striking back. Tom heroically chose the latter by pulling out his six-inch hunting knife and stabbing the bear to death.

What makes this story so interesting is that Tom only started carrying a knife after he heard about the death of woman who was attacked by a bear not long before. The woman’s husband tried to save her with a small Swiss Army knife but failed.

That’s when Tom was inspired to start carrying a hunting knife, which ultimately saved his dog’s life and probably his life.

Both Tom and his dog suffered injuries from the bear attack, but they recovered quickly.

7 Unique Uses For A Utility Knife