Do Knife Companies Lie About Their Steel? 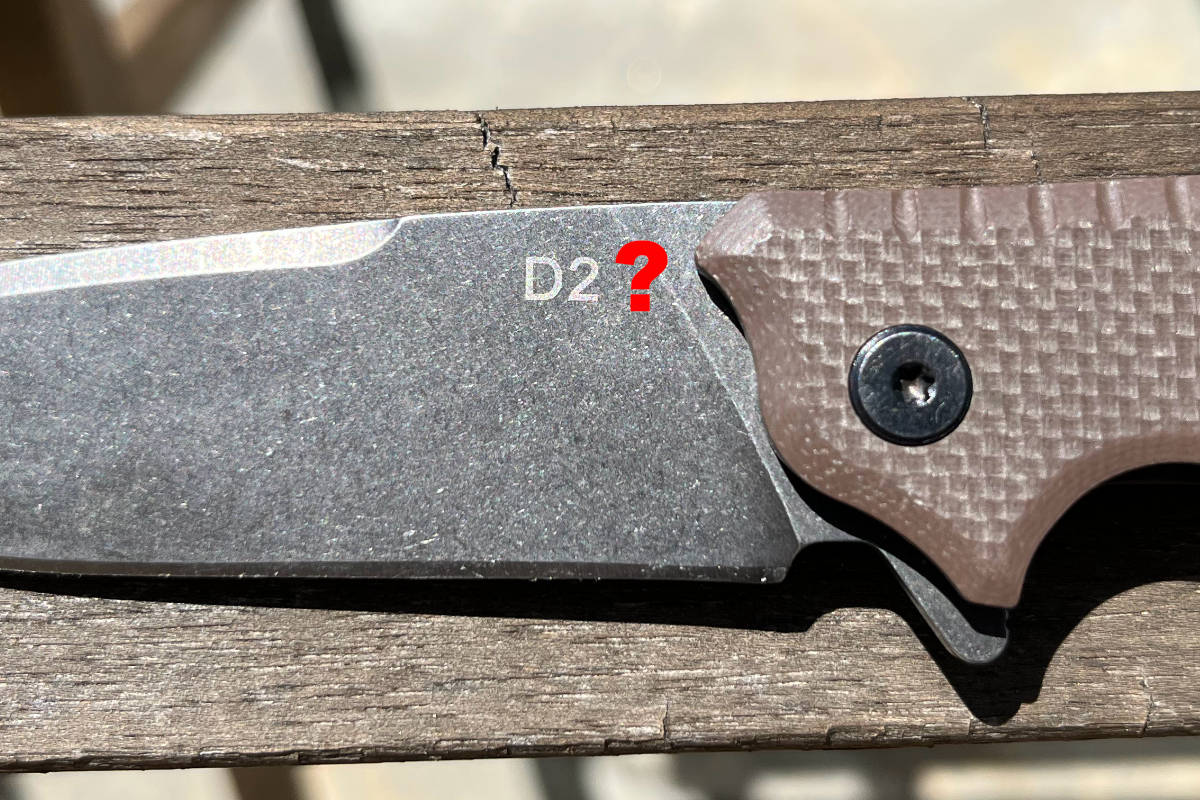 It’s a common concern among knife collectors. You spend just over $150 (if you’re lucky) on a brand new knife with the latest steel, only to second guess whether it’s the steel you paid for.

It may be because the steel is starting to rust in some spots, dulls quicker than you expect, or isn’t as tough as you thought it should be.

That’s when you start to ask yourself: do knife companies mislabel or lie about the type of steel they’re using?

The truth is that sometimes they do.

I decided to write this post after watching a video knifemaker and former Cold Steel collaborator Andrew Demko did on a YouTube channel in November 2020.

When the interviewer mentioned that people were ambivalent about the use of AUS10A steel in one of Cold Steel’s knives, Demko said that the reason certain steel gets a bad reputation is because some knife companies are intentionally passing off lower end steel like AUS6A for AUS8A.

It was pretty surprising to hear Demko say that it was a fact and something he’s seen firsthand. Demko didn’t mention the name of the companies that do it, so we don’t know the culprits. It was good to hear that Lynn Thompson, the old president of Cold Steel, did not partake in the fraud.

Before going through some examples of knife brands using steel different than advertised, I should note that it’s not always intentional. There may be cases where the supplier sent the wrong steel or it was simply a bad batch. Not all the companies who have mislabeled steel are bad or out to scam people.

In 2017, one of our favorite knife YouTubers — Pete from Cedric & Ada Gear and Outdoors — conducted a rust-resistance test on the Bark River JX6 in CPM 154. He found the knife was unusually rusty for a steel that’s supposed to have pretty good corrosion-resistance.

Here is the initial test:

After Pete went back and forth with Bark River, it seems like they admitted it was a mislabeling of the knife. Since Bark River did sell the knife in A2 steel and CPM 154 steel, I think it was most likely a simple error in labeling the knife rather than an effort to scam people.

Still, I was not able to find out whether Bark River recalled the knives or refunded people for the mistake.

Subsequent tests of Bark River products have all seemed to match up with the steel.

In 2016, CRKT underwent a similar controversy when it sold an exclusive version of Ken Onion’s terribly named Hootenanny with S30V steel through a dealer. The standard version uses 8Cr13Mov stainless steel.

At the time, CRKT was not known for using higher quality steels, so people were pumped to get an upgraded version of any CRKT knife.

Things quickly turned sour when one member of BladeForums noticed the knife staining quickly after cutting an apple.

After tons of people noticed the same issue and wanted answers, CRKT responded with a statement:

We are aware of the problem with the blade steel. We’ve taken immediate actions and the weight of the issue is not lost on us.

An independent third party lab test has confirmed that the steel is not S30V. We were disappointed in the outcome of the test and we are currently revisiting not only our relationships, also our own processes.

We have taken the following steps to ensure that history does not repeat itself:
· Re-confirming our supplier certifications.
· Developing an improved Quality Assurance process for all CRKT products.

We care about quality here at Columbia River Knife & Tool and integrity is mission critical to how we have chosen to do business. We recognize that issues like these threaten that core attribute of who we are.

CRKT and the dealer immediately requested a return of the knives for a full refund.

Here’s a video summarizing the drama:

It was good of them to request returns, but CRKT did take a hit for a few years after that. They haven’t had that issue since as far as anyone can tell.

Over the course of three years, YouTuber LuvThemKnives had hundreds of knives sent to a lab to find out whether actual steel matched with the advertised steel.

Although this is anecdotal, the results were pretty interesting. As you might expect, the main brands like Spyderco, Benchmade, Cold Steel, CRKT, CIVIVI, and others all matched  up.

It was some of the lesser known or knockoff brands that didn’t seem to match up properly. He assembled the full list of tested knives in a Google spreadsheet for your viewing pleasure.

Brands like Eafengrow, Y-Start, Fura, and Komoran seemed to be the biggest offenders in these tests. Like I said, it’s very possible these were simply bad batches or accidental, but you might want to be careful buying these knives.

Then, of course, any clones or counterfeits were also mislabeling their steels, but you could probably already guess that.

How to Tell If Knife Steel is Legit

The age-old question is how to tell if something is real or not.

For counterfeits, it can be pretty hard to tell if something is real or not, but we have a few tips you can follow in our post on how to tell if your knife is a counterfeit.

If you have a real knife and want to know whether the steel advertised is actually the steel you bought, then it becomes a lot tougher.

The easiest way is to do your own home test. For example, you can see whether a knife is actually stainless steel by conducting a rust test like those done by Pete from Cedric & Ada. Of course, this requires some knowledge of how the steel should perform and won’t necessarily detect the difference in tiers of stainless steels. 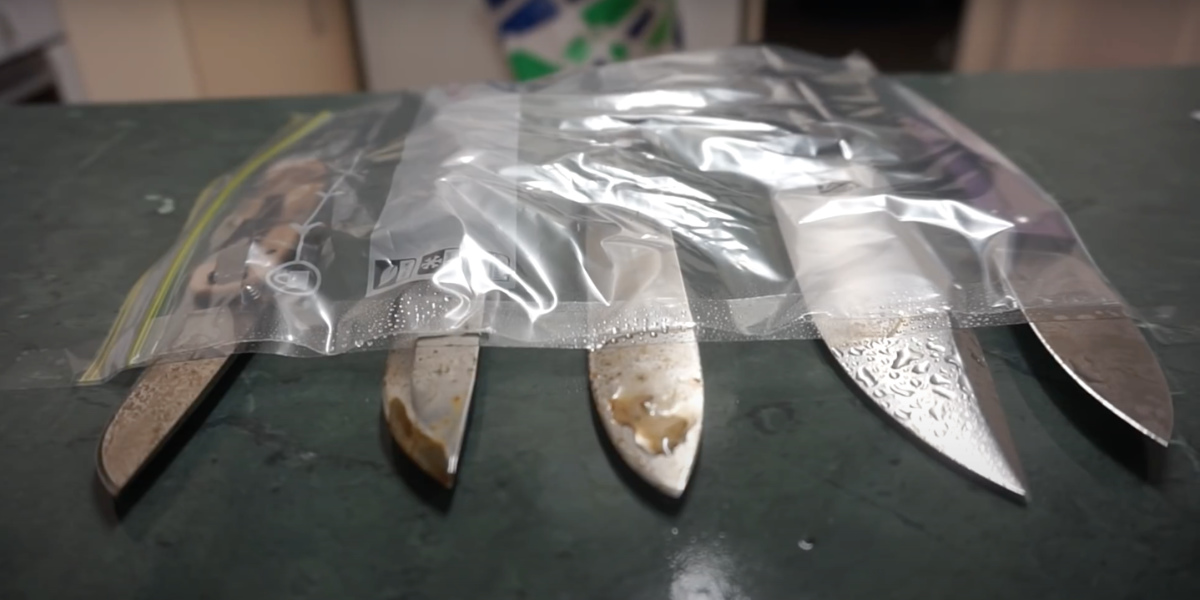 One of Pete from Cedric & Ada Gear and Outdoors experiments.

Even if the performance does not match up, it could be the result of poor heat treatment or quality control.

If you really want to know, you can send your knife to a lab to see the alloy percentages used in the steel, but unless you know someone, it might be hard or costly to do.

Our best advice is to buy knives from reputable brands through reputable dealers.

Unfortunately, nothing in life is ever certain, except for taxes and death.