Similar to the carbon steel versus stainless steel debate (which is actually way more complicated), knife owners are divided over whether a knife should or should not have a lanyard.

The thing about the lanyard debate is that people aren’t usually lukewarm about the topic. It gets people riled up more than the sit versus stand debate during the National Anthem.

But is there ever a time and purpose for lanyards on pocket knives? Yes, there is.

Before the wolves come out to correct me, let me clarify something: Lanyards and fobs are different.

Although used interchangeably, lanyards and fobs look and function differently. A lanyard is a longer piece of twine like paracord that ties to the end of a knife and wraps around the wrist for more security when wielding the knife.

A fob, on the other hand, is typically a shorter piece of twine that’s tied at the end so there is no opening to fit your hand in. A fob is there to keep your knife from falling in your pocket and other things (as you’ll soon learn).

There’s also a thong, which is essentially a leather string, that serves a similar function as the fob.

Now onto the reasons to add one of these to your folder.

I won’t go into the history and origins of the lanyard, but I believe the original purpose of a lanyard was to keep an item securely tethered to yourself. For example, some in the French military even carried a pistol tethered to their arm so they wouldn’t lose it. You can see Eli Wallach from “The Good, the Bad and the Ugly” attached to a pistol with a lanyard below. 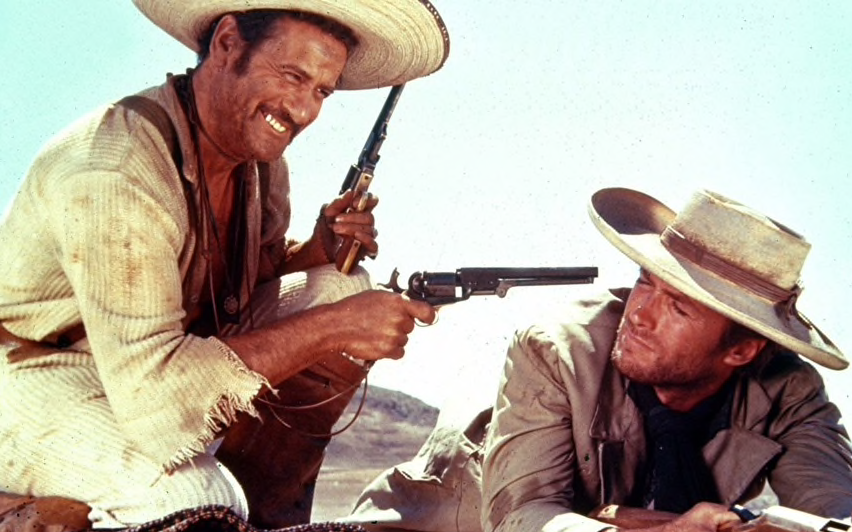 Since then, people have adopted the lanyard on knives.

The lanyard is especially useful on larger knives that may fall out of your hands during use — though keeping a knife stuck to your wrist when your grip fails you may not always be the wisest idea.

It’s not as necessary on smaller pocket knives unless you’re using it in or around water, but the sentiment and reasoning still stands if you use your folders for hard-core tasks.

Knife people don’t care too much about looks… OK, so maybe a few of us do and lanyards/fobs add an extra item to accessorize your knives. This is the manly equivalent of bejeweling your smartphone case or matching your nail polish to your socks. And there’s nothing wrong with it.

With looks, we’re talking more fobs than lanyards here. Fobs allow you to color coordinate your knife, make it pop, and add a personal touch that makes it your own.

While this reason has nothing to do with functionality, it allows a knife user to show off their creative side. There’s no denying a fob done right can look amazing, especially when complemented by a lanyard bead, which are all the rage these days.

I could be wrong, but I’m pretty sure the use of the fob as an ornament was popularized by Chris Reeve.

The etymological origin of the word fob may come from the word pocket in a dialect of German. One of the original purposes of a fob was to deter thieves and make things like pocket watches easier to access. The fob is no thief deterrent, but it does make it easy to get things out of your pocket.

My first EDC post! Been collecting SAK's for years, so will be sharing as my collection grows, this is my current pocket companion the Victorinox Alox Pioneer. * * * #edc #everydaycarry #victorinox #pioneer #victorinoxpioneer #knife #pocketknife #sak #swissarmyknife #alox #myvictorinox

Thanks to Sal Glesser, the vast majority of pocket knives these days come with a pocket clip, but many remain clipless. Without a clip, the knife will just fall into the bottom of your pocket and commingle with your keys, phone, etc. But with a fob that just sticks up over your pocket, you’ll have easy access to the knife at all times.

This is especially true for the clipless Swiss Army Knife. In fact, Victorinox even sells lanyards.

Here’s one many people don’t think of unless they have a knife that needs it, but a lanyard or fob can be great for increasing the grip on a smaller knife.

The CRKT RSK Mk5 is the perfect example. Although this is a fixed blade, the handle is only about two inches. But designer Doug Ritter added a lanyard specifically to add length for your hand. This image from Equipped Cat perfectly demonstrates that.

You’ll often find this on the Spyderco Bug series (the smallest of which is only 2.9 inches overall).

Let’s say you’re on a nighttime excursion through a dense jungle and you drop your Kershaw Blackout. You can say goodbye forever to that badass knife. But if you had a glow-in-the-dark fob or a neon lanyard, you’d have a better chance spotting it.

Sure, it may mess with the overall aesthetics of the knife, but it can also work in the design’s favor.

Some knives that are meant for boating or the outdoors come with pretty funky colors like those in the Spyderco Salt series, but with a well-designed lanyard, you can get the more versatile darker colored handle scales.

If you have any other uses for lanyards or fobs on your knives, let us know in the comments.

Boker Plus Urban Trapper – Badass Knife of the Week