What Should I Engrave on a Knife? 10 Engraving Ideas 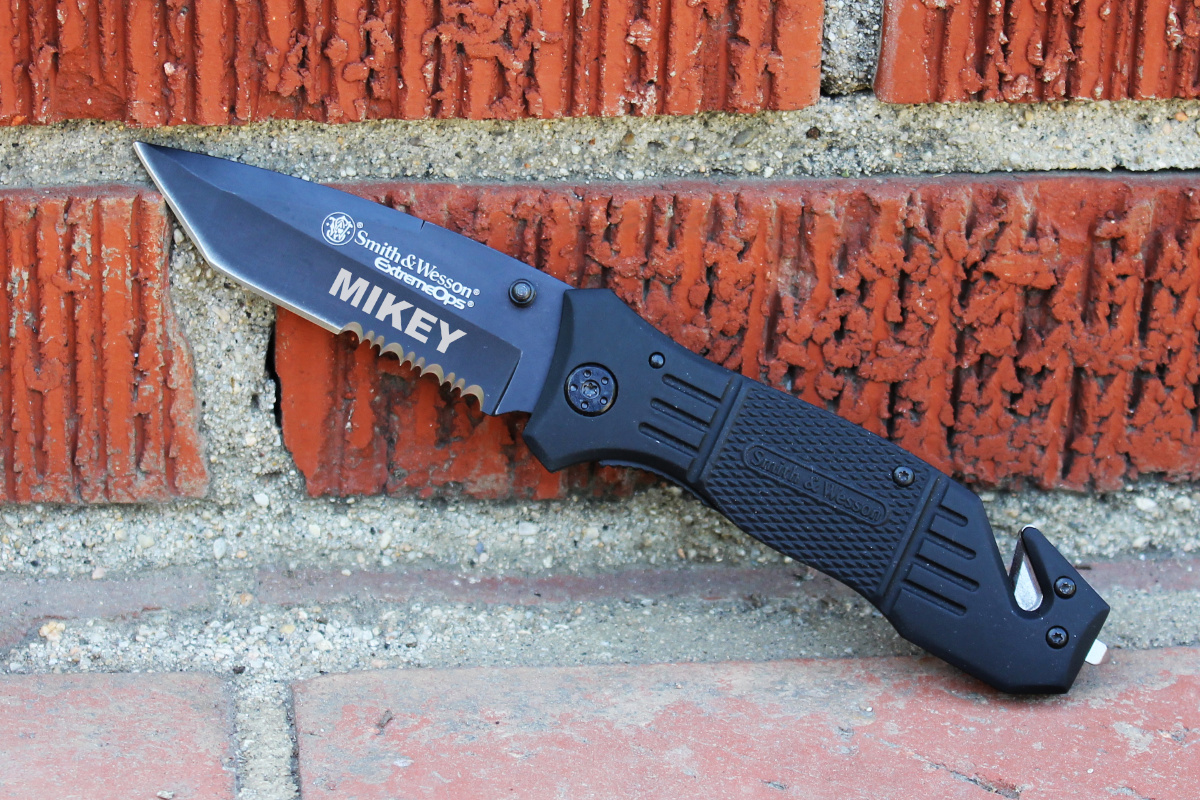 There are so many things that make laser-engraved knives the perfect gift (something we’ve written about extensively), but basically they are functional and meaningful.

But what exactly should you get engraved on a knife?

That’s the million dollar question that can make or break your gift.

Our engraved knife experts at Knife Depot have engraved thousands of knives over the years, so we know a thing or two about what looks good on an engraved knife.

If you’re having trouble deciding what to engrave on a knife, here are some tips and suggestions. 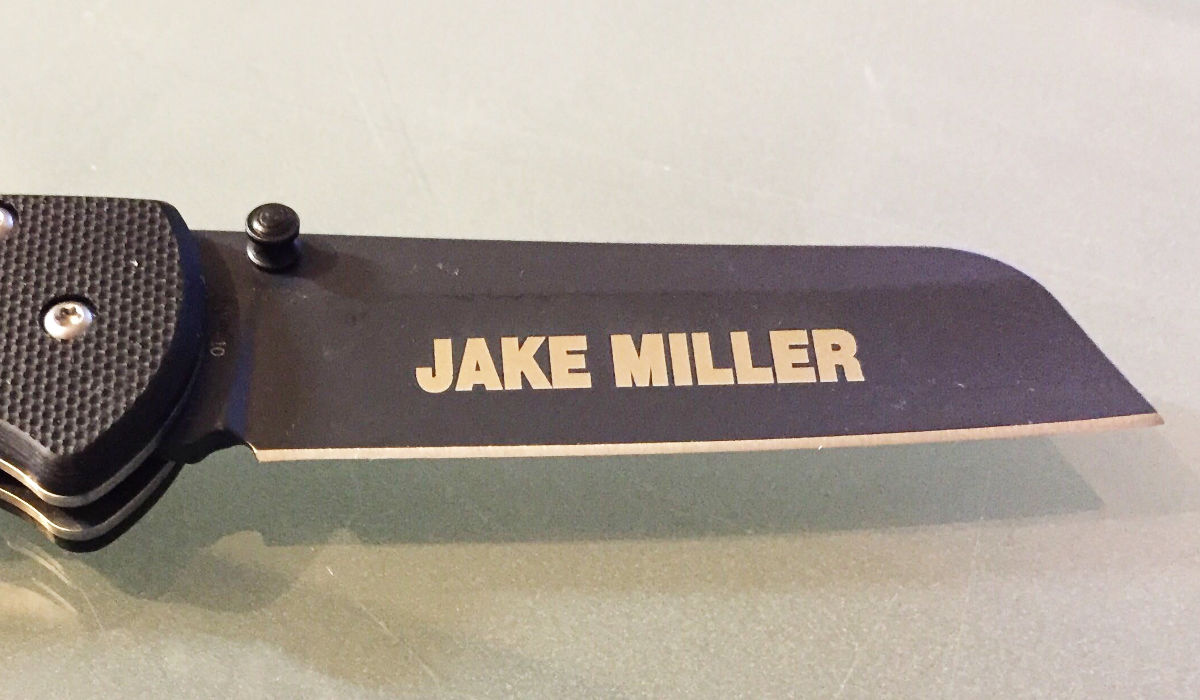 Out of the thousands of knives we’ve engraved, names are by far the most common.

It just makes sense. While it may seem counterintuitive to have your name on a knife, it just makes things more personal than a generic knife with no engraving.

In fact, having your name on a knife is a huge benefit. I can’t count the number of knives I’ve leant to people that I’ve never seen again. I wish those knives had my name on them!

Nicknames are another great thing to get engraved on a knife.

My dad has a Buck 110 Folding Hunter with his nickname (Timbo) on the blade that he absolutely cherishes. He’s had it for decades, and you can bet that had that person given him the knife without his nickname on it, it would have been just another knife in the toolbox.

There is one caveat here. Nicknames are fun, but make sure they’re not embarrassing.

We often see wives or girlfriends getting knives for their husbands or boyfriends. The last thing you want to get is a knife with “Babe” or “Snookums” on it. You can probably imagine the endless stream of jokes when he lets his buddy borrow his Smith & Wesson 1st Response with the word “Schmoopie” on it.

The other natural option that’s popular is initials. This is a little more elegant in my opinion because “Thomas” on a knife offers a different feel than “TYT.”

Another good thing about initials is that you can opt for a monogram engraving with different styles. 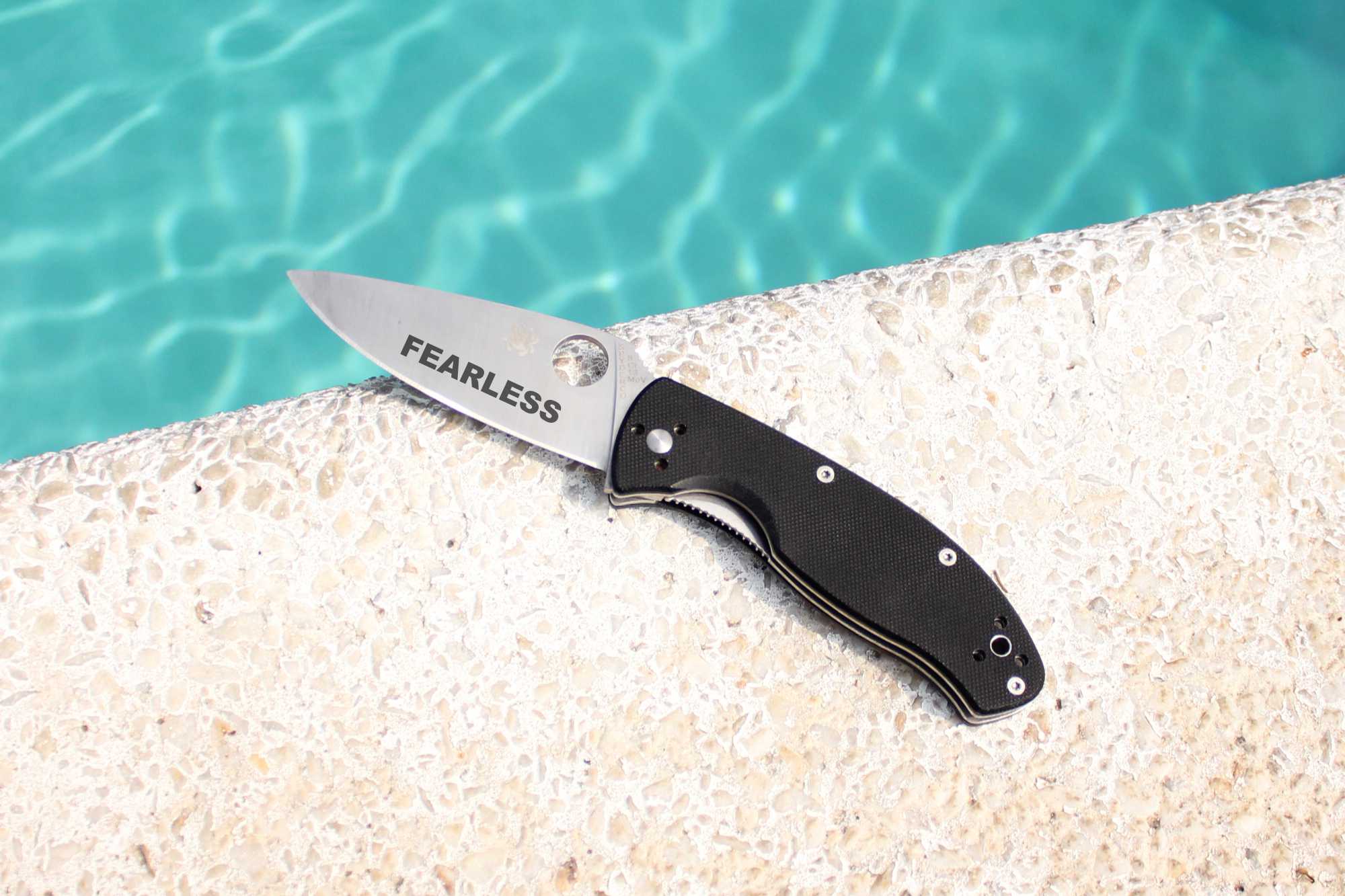 Instead of going for a name, some people get an adjective engraved on the knife.

An example of this we had recently was the word “Fearless.” It is simple, descriptive, and truly awesome.

One I always wanted to get for someone was “Tenacious” on a Spyderco Tenacious. Not only is the knife tenacious and determined but it’s also a great adjective to call someone.

Having a single adjective or short phrase lets you be more creative than a name or initials. 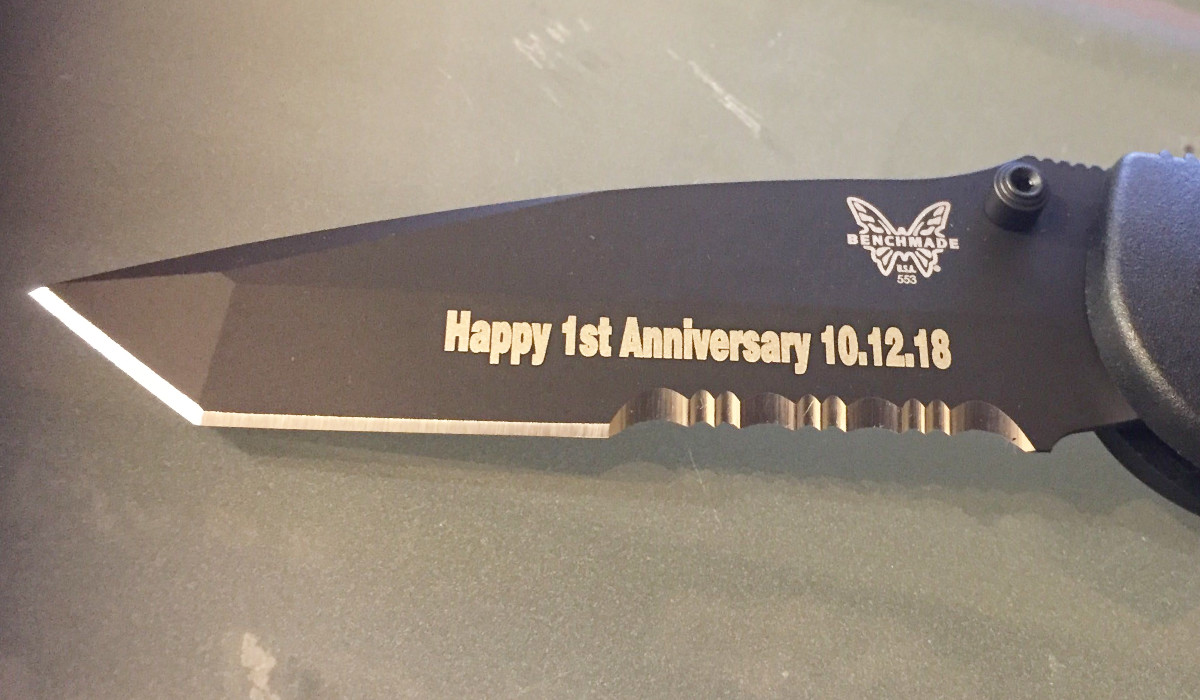 One reason you’re likely giving a knife to someone is to commemorate a date or event. We get plenty of people engraving “Happy 30th Anniversary” or “Merry Christmas 2022” or “Happy Retirement” or the date of a wedding.

All of these are great phrases and engravings to honor a certain day in time. When the recipient goes to grab their favorite Kershaw Leek and sees that “Happy 21st Birthday,” they’ll be flooded with nostalgia and memories.

Bible verses are another popular inscription that people get on their knives.

The good word has helped countless people through the good times and the bad times. So it’s no surprise that people get a bible verse engraved on a knife.

Plenty of people will get a knife to honor someone they lost.

We have seen engravings that say “In Memory of Dad” or “Mom 4/3/36 – 3/17/94.” It may not sound like the most uplifting way to memorialize someone, but with a knife always in the pocket, it’s a good way to always keep those we lost near the top of our minds.

One of the saddest things we’ve ever engraved on a knife was the fingerprint of a son who had passed away. Truly heartbreaking. 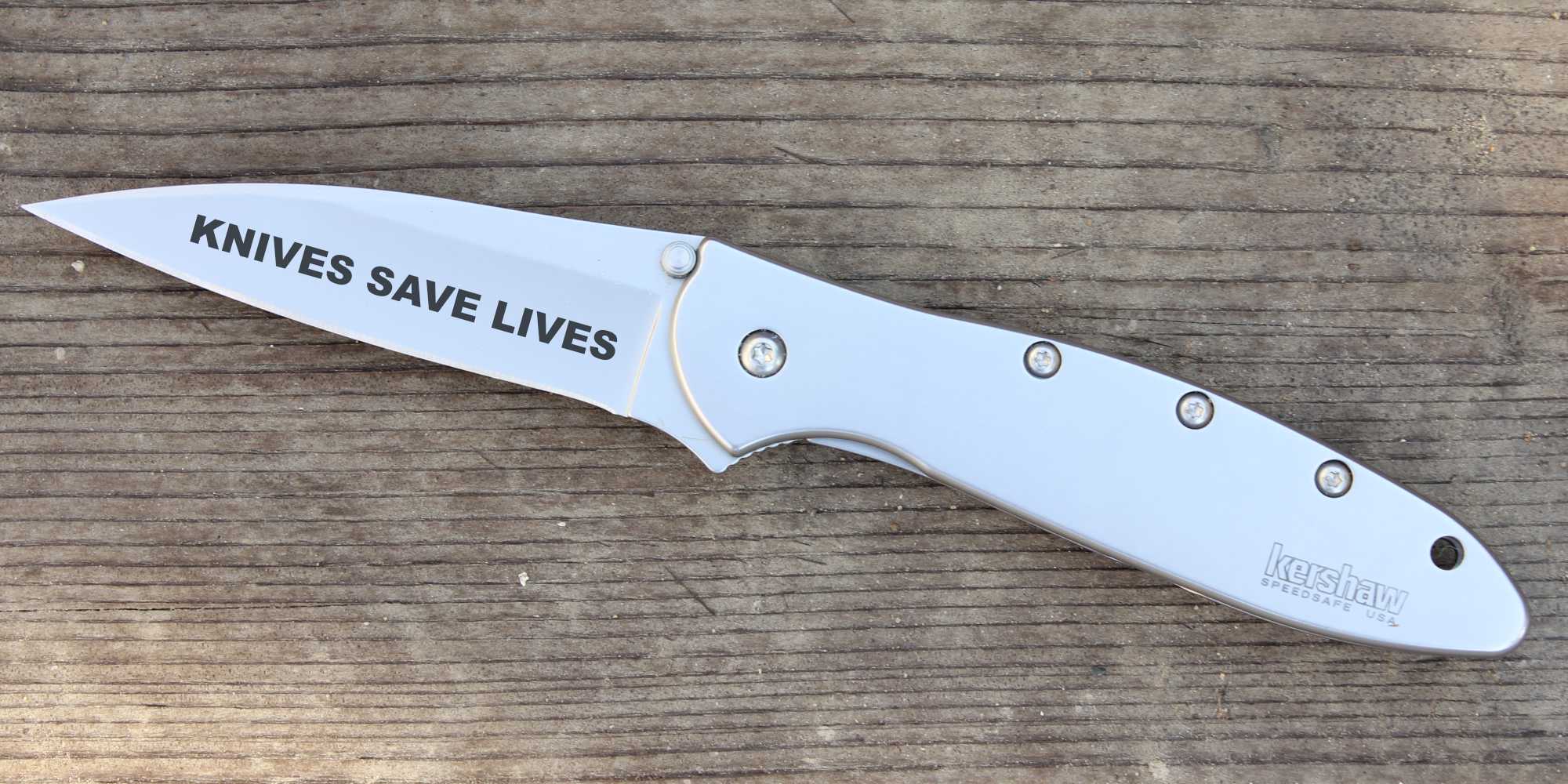 That’s one of my favorite quotes from Kurt Vonnegut’s Slaughterhouse-Five and something I would absolutely love on one of my knives.

The key to adding a quote on a knife as an engraving is to keep it short! The character limit on engravings are typically limited to 30 and might even be lower, depending on the size of the knife. That means a quote like “When you come to a fork in the road, take it” from Yogi Berra is too long. Instead, you might opt for something shorter like “I call the big one Bitey.”

Just some examples of quotes we’ve engraved in the past include “Never Lose Your Edge,” “No Pain, No Gain”, “Every Girl Needs a Knife,” “Measure Twice, Cut Once,” and “Don’t Tread on Me”.

There is some flexibility on what you can get engraved on a knife. If you’re a company giving out engraved knives for Christmas, it makes the most sense to put a logo on it.

This also has the added benefit of promotion if a worker hands his knife to another person or lets his son have it. 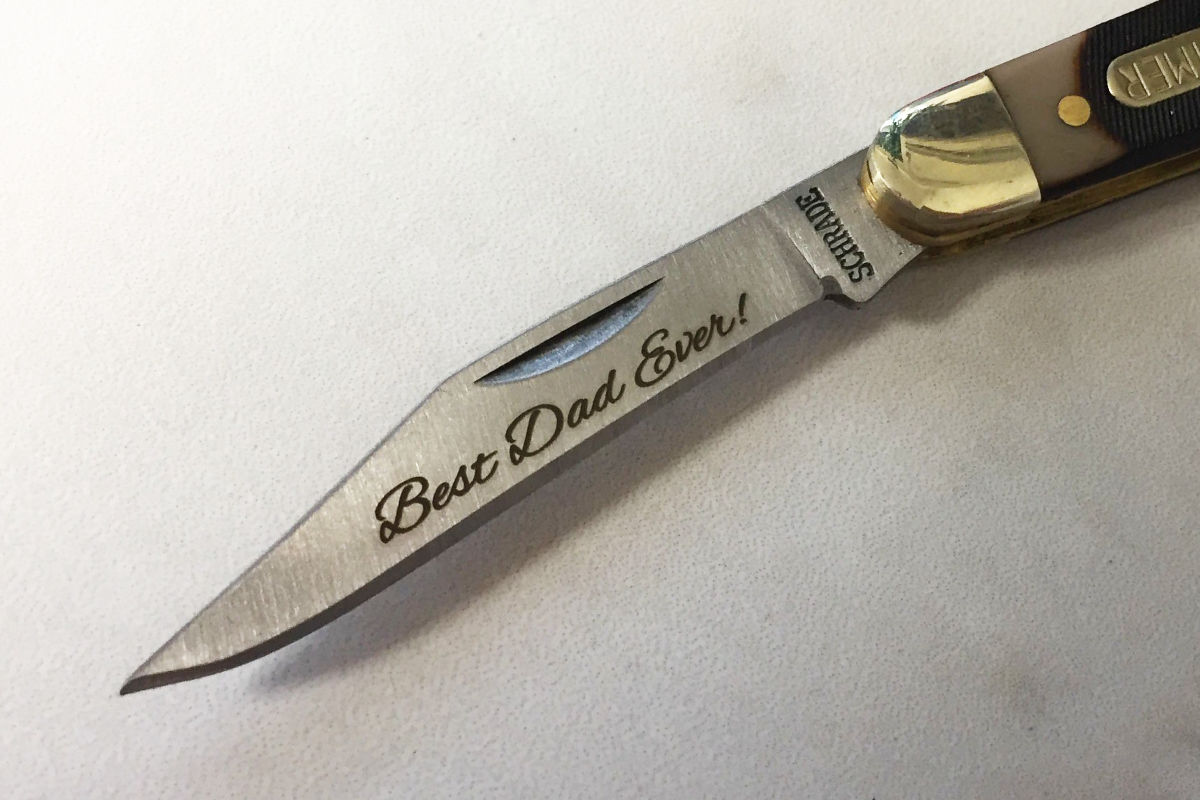 The last type of engraving you typically see are expressions of gratitude or love.

If you’re struggling to think of a good engraving, you can’t go wrong with a simple “Thank You” or “Love You” or “Good Luck” or “Congrats.”

These are universal messages that can be used for pretty much any holiday or occasion. While they may sound impersonal at first glance, you can add things that make them more specific to you. For example, you can make it “Thanks For Your Kindness” if the person helped you through a hard time or “I Love You, Bobby” for something more sentimental.

Whatever message you send, just make sure it comes from the heart.

CIVIVI Bo – Knife of the Week