This is the first in a series of occasional posts on very bizarre and strange knives we come across in our research. 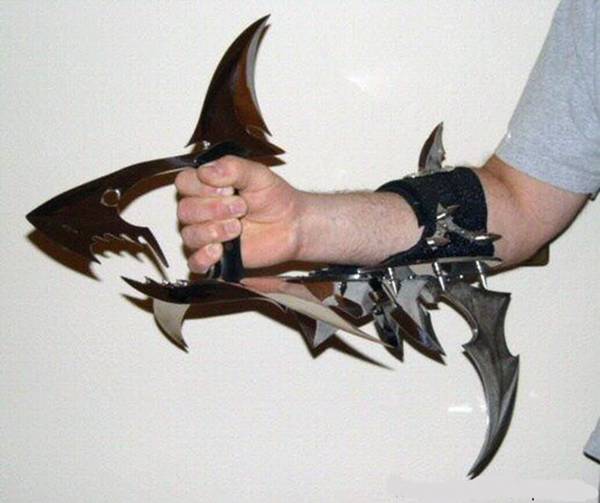 If you’re the ultimate fan of the 1975-classic Jaws and have an undying love of knives, we found the item for you: the coveted Shark Knife.

As you can see from the image above, this outrageously impractical knife features an array of razor-sharp edges created in a way that represents the likeness of a fierce shark.

I have no idea where to actually buy it, but if you somehow find a seller and can’t live without this knife, it’ll set you back a few hundred bucks.

The knife seems like more of a hazard to the guy wearing it than anyone else. He’d get a big surprise if he forgets he has it on and puts his arm at his side.

This isn’t something you’d want to use for opening beer cans (or would you?) or open an envelope, but it sure would be a great thing to have on during Discovery Channel’s Shark Week. Keeping with the nautical theme, there’s also a giant squid knife for your enjoyment.

Nevertheless, if you’re interested in a knife that’s not designed to look like a knife but actually kills sharks by freezing their inside and then blowing it up, we recommend checking out the badass WASP Injection Knife.

At least with that knife, you don’t run the risk of shredding up your body and everyone else in the general vicinity if you sneeze. Well, maybe.

Do you want a knife sharpener that sharpens every knife under the sun?