A knife that freezes organs then blows them up… yes, it’s real 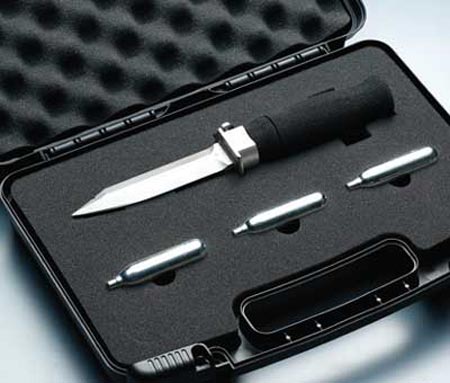 The only thing cooler than a knife that slices is one that blows up organs when it’s stabbed into an animal.

Although this knife isn’t exactly new, it’s been making headlines for its recent appearance on “Law & Order: SVU” as the weapon that killed John Stamos.

The aptly named WASP Injector Knife shoots a compressed basketball-sized ball of gas into the victim where it instantly freezes then explodes the internal organs at 800psi.

You might be wondering why anyone would need this knife besides the criminals on “Law & Order” and those looking to blow up watermelons (see video below). The target consumer of the knife is the diver who frequently encounters gigantic vicious sharks who aren’t deterred by regular stabs from a knife.

Reportedly, if the knife is used correctly on a shark, the compressed gas will freeze its inside, so blood doesn’t begin to pool around the shark thus not attracting more. Once it kills the shark, the ball of gas will cause its carcass to float to the surface.

I don’t think anyone’s used it on a shark (or really needed to), but if they did, that diver would definitely be one of the coolest entries in the Knives Save Lives series.

If you’re curious how it works, the knife comes with three cartridges that you have to reload after each use. There is a trigger for your thumb that releases the gas.

Any knife that comes with the warning “WASP Injection Systems, Inc. does not condone the killing of innocent creatures” has to be really cool.

Although these knives are impractical for daily use, the cheapest model will cost you about $400.

How to sharpen a knife with a whetstone

We’re Giving Away Free Knives to Veterans for Memorial Day