The King of Fling: a glimpse into the life of professional knife-thrower Jack Dagger

Jack Dagger is now the official sponsor of the Cutting Edge “Knifeslinger” giveaway.  Jack is donating a set of his custom-made throwing knives along with an autographed instructional DVD to the first-prize winner.  Learn how to enter the contest here. 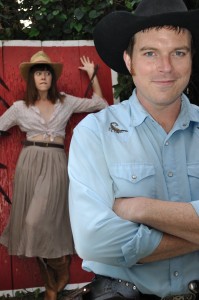 “The difference between success and failure is just inches,” said professional knife-thrower Jack Dagger, while teaching talk-show host Conan O’Brien the proper way to throw knives on his show last year. After a quick tutorial from Dagger, O’Brien successfully sliced through one of the half-dozen balloons he was targeting.

It was now Dagger’s turn.

He placed a cucumber on the forearm of his gorgeous assistant, Tanya. Then, from across the stage, he encircled her arm with a flurry of knives, before eventually slicing the cucumber in half to the amazement of O’Brien and the crowd.

Dagger, whose real name is Todd Abrams, has been delighting spectators around the world with his knife-throwing skills for over a decade.

A native of Baton Rouge, La., his initial interest in throwing knives spawned from adolescent boredom.

“I was a pretty ADD kid and started throwing screwdrivers in the dirt and making a game of trying to hit leaves and gumballs,” he said.

From there, Dagger branched out to hurling pocket knives, but it wasn’t until 1990, when he read an article about famous knife maker Harry McEvoy and his company, True Balance Knife Corp, that he was able to finally get his hands on a set of throwing knives.

Dagger said that he picked up the skill working solo, as most other knife throwers did in the pre-Internet age.

“Every thrower I ever met thought they were the only one in the world,” he said.

Eventually, Dagger found out about former knife-throwing performers Paul LaCross and Che Che Whitecloud, but he was still constantly in search for “that Yoda, that one person who was an amazing thrower, and is still alive.”

When he moved to California in 2003, Dagger met Michael J. Bainton, the current executive director of the International Knife Throwing Hall of Fame, who Dagger described as a “tough, old-school cowboy.”

Under Bainton’s guidance, Dagger began to perform between 800 and 1200 throws a day in an attempt to ingrain the muscle-memory of knife throwing.  He also began experimenting with human targets, who he would encircle with knives.

With the physical aspect of knife throwing mastered, Dagger began to book more and more events, however he soon realized that he was ignoring the equally-important theatrical element of his knife-throwing routine.

An actor during his childhood, Dagger focused on enhancing his audience engagement.

“Any monkey can throw a knife, so I began to really working on building a relationship with the audience that had an emotional aspect,” he said.

The result was that Dagger became more renowned as a performer.

Not only was he booking more gigs—he’s done between 1,500 and 2,000 in his lifetime—but he starred in More Extreme Marksmen and seasons one and two of the “Top Shot,” (both on the History channel) and will also be featured in an episode of Spiderman-creator Stan Lee’s new show “Superhumans”.

Though he’s never hit any of his assistants with a knife, Dagger has been injured once in the workplace.

Around 2004, he expanded his repertoire to catching knives thrown at top speeds.  His performances were flawless, until during a taping for a Japanese television show, a poorly-thrown knife punctured Dagger in the palm.

The consummate professional, Dagger bandaged the hand, covered it up with superglue and caught an additional dozen or so knives until the producers had finally captured the best shot.

Dagger’s advice to novice knife throwers is to make sure that they have a quality pair of throwing knives—he he has his own line of Jack Dagger Top Shot Bowie knives for sale—and to check out organizations like the International Knife Throwers Hall Of Fame, which  has developed a standardized set of competition rules.

Dagger also believes that someday knife throwing will become an Olympic event and hopes that his exhibitions and teachings can help it happen.

If O’Brien’s performance under Dagger’s tutelage is any sign of the future, then knife throwing may be poised for a wave of success.

A few minutes after bursting the balloons, O’Brien threw a perfect strike and sliced a cucumber off the forearm of a wax portrait of “Fonzie.”

The jubilant O’Brien performed a victory dance around the stage to celebrate his conquest. For Dagger,  who was equally enthused, it was just another day at the office.

To read more about Jack Dagger or book him for a performance, check out his website.