If you take a look through some of our comments on our Facebook posts, you’ll see countless people lamenting the lack of innovation and design diversity in the knife world. These people have clearly never heard of the Hawks.

Grant and Gavin Hawk are a father and son knifemaking team that first started making knives in 1995. Whereas most knifemakers work on making knives within the confines of the modern designs, the Hawks have pushed the boundaries for what knives can be and how they can work.

The Hawks are owners of many patents and continue to find ways to completely shatter the traditional knife design. In honor of the innovative duo, we’re taking a look at some of their most innovative designs. 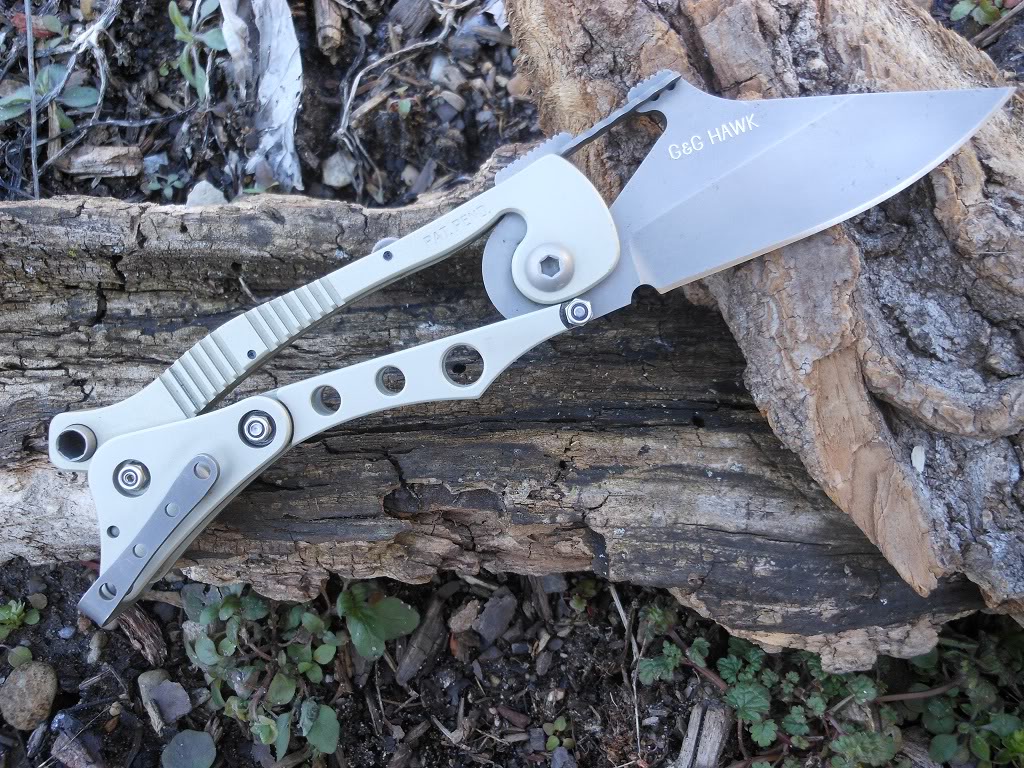 Image from mwmccormick on bladeforums

We’ll kick off the list with one of their best known creations: the E.T. Standing for External Toggle, the E.T. helped put the Hawks on the map as innovative designers. The knife uses a unique toggle system to engage and close the knife at the butt of the handle. As this training video shows, there were actually a number of ways to engage the knife.

The knife was later picked up by Kershaw and took the community by storm. In 2005, the Kershaw/Hawk collaboration won the Most Innovative American Design at the BLADE Show and Best Overall Design at IWA. While the design was not entirely functional and was eventually discontinued, it showed what kinds of genius minds the Hawks had. 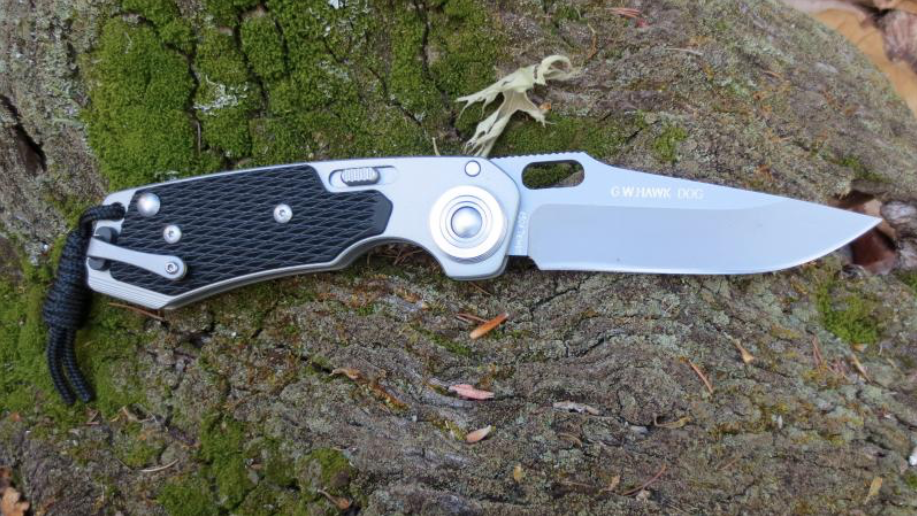 Hawk DOG from JDP1998 on BladeForums

The D.O.G. was an early knife and among their first folding knife designs. It’s also notable for being the first collaboration between the Hawks and CRKT and it was a good one. This beefy folder was named after its locking mechanism. It has an automatic action that uses a deadbolt system to lock into place. I’ve heard people say they put the lock through the ringer without failure. Take a look at what one review had to say:

Unfortunately, it was discontinued and can rarely be found. It’s a shock such a great lock isn’t seen on more knives. 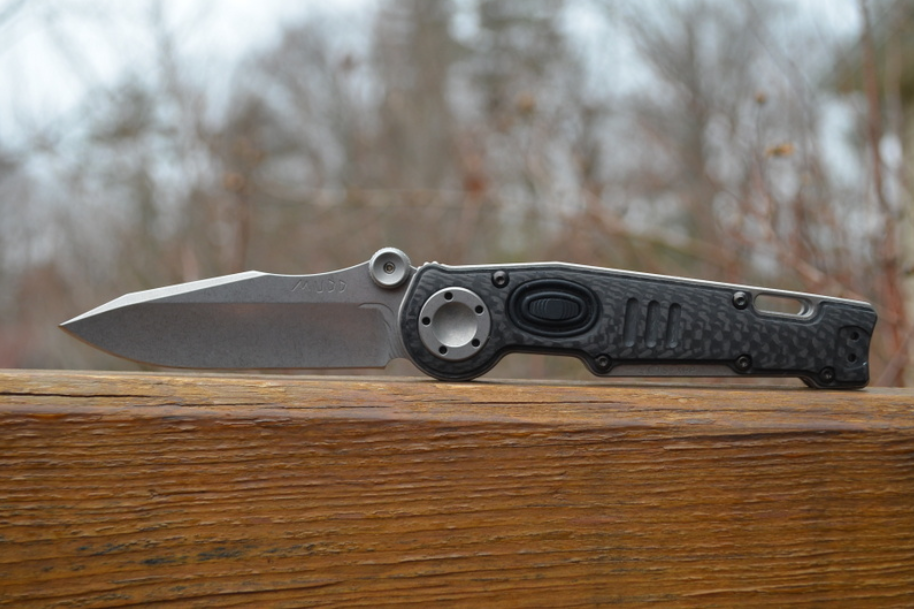 Image from jritayik on BladeForums

Do you hate when debris or gunk gets stuck in your lock mechanism? The Hawks solved your problems with the M.U.D.D. This was the first knife to use the Hawk Lock because it allows the lock to be completely sealed inside the knife thanks to the use of a rubber boot around the button. This prevents failure due to dirt from hard use. The lock mechanism is a spiritual successor of the Benchmade AXIS lock. It works essentially the same, but the way it functions on the inside is a little different.

The MUDD was eventually picked up by Zero Tolerance for a few years and won Most Innovative American Design at the BLADE Show in 2006 (a trend you’ll likely notice). Along with the lock mechanism, the knife is designed for hard use. An oversized thumb stud makes it easy to engage with gloves while the 3.25-inch blade is usually CTS-XHP steel. The handles are often titanium.

You can still get this knife as part of their midtech line. 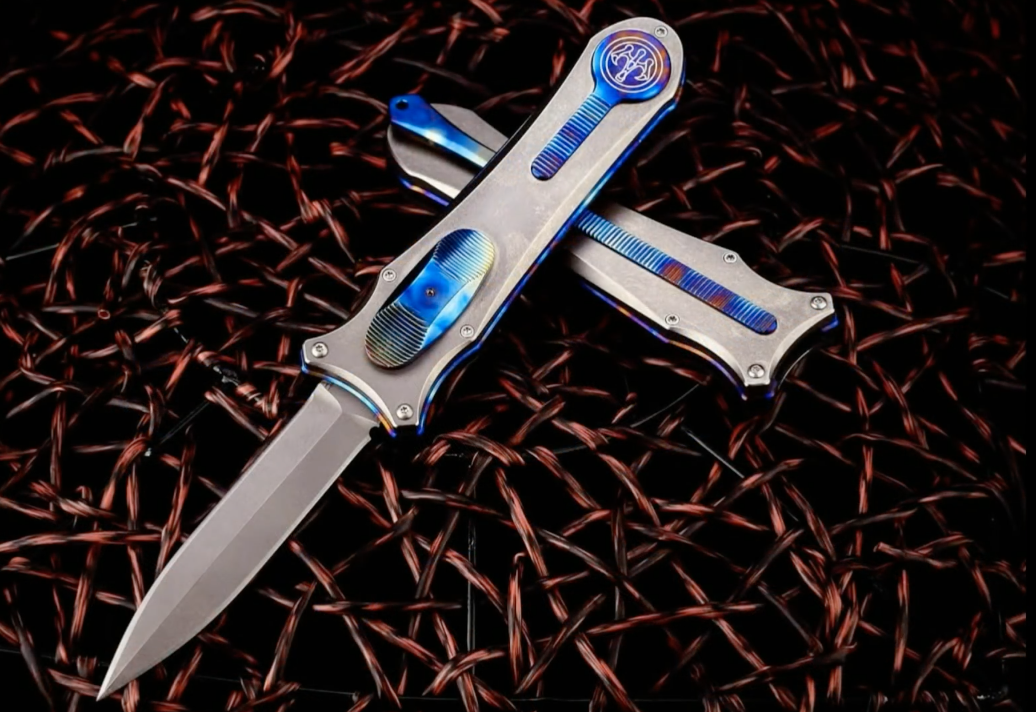 Image from review by Jim Skelton

The Deadlock is the newest design from the Hawks and the focus of the knifemakers for the past little while. The team took on the challenge to improve the OTF and succeeded with a completely revamped internal design. Whereas most OTF knives have some type of blade play due to the internal mechanisms, the Deadlock has a lockup with absolutely no blade play.

Knife News reported that the Hawks are really taking their time to produce this new knife instead of working with one of the major brands (as they’ve done in the past). The price range is between $1,000 and $1,800, if you can get one when orders open. 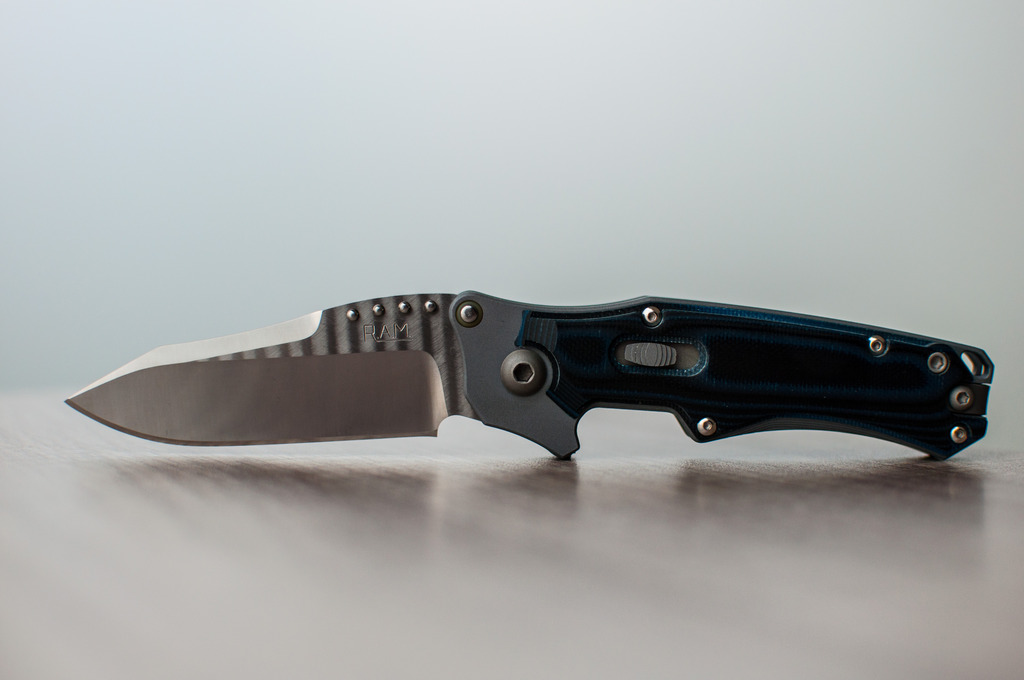 Like the E.T., the R.A.M. was another design picked up by Kershaw and similarly won the Most Innovative American Design at the BLADE Show (this time in 2007). If I’m not mistaken, the knife was the second to use the Hawk Lock.

Another selling point of the R.A.M. and Hawk Lock is just how smooth it opens. The placement and design of the flipper makes the knife feel like it’s an assisted opener. Pretty much every review praises the ease of engagement.

Just read this praise from a member on the BladeForums:

Oh definitely, the RAM is the smoothest opening production knife I have ever owned. If you disengage the lock and just flip it open or shut, it just glides into place. And on top of that it has ridiculously fast opening, I dare say its faster than most of the autos I have handled. It also opens faster than my BM 580 and that is an amazing fast assisted opener.

The knife was discontinued, but you can find a ton of videos on YouTube like this one from Lazy Lizard Gear: 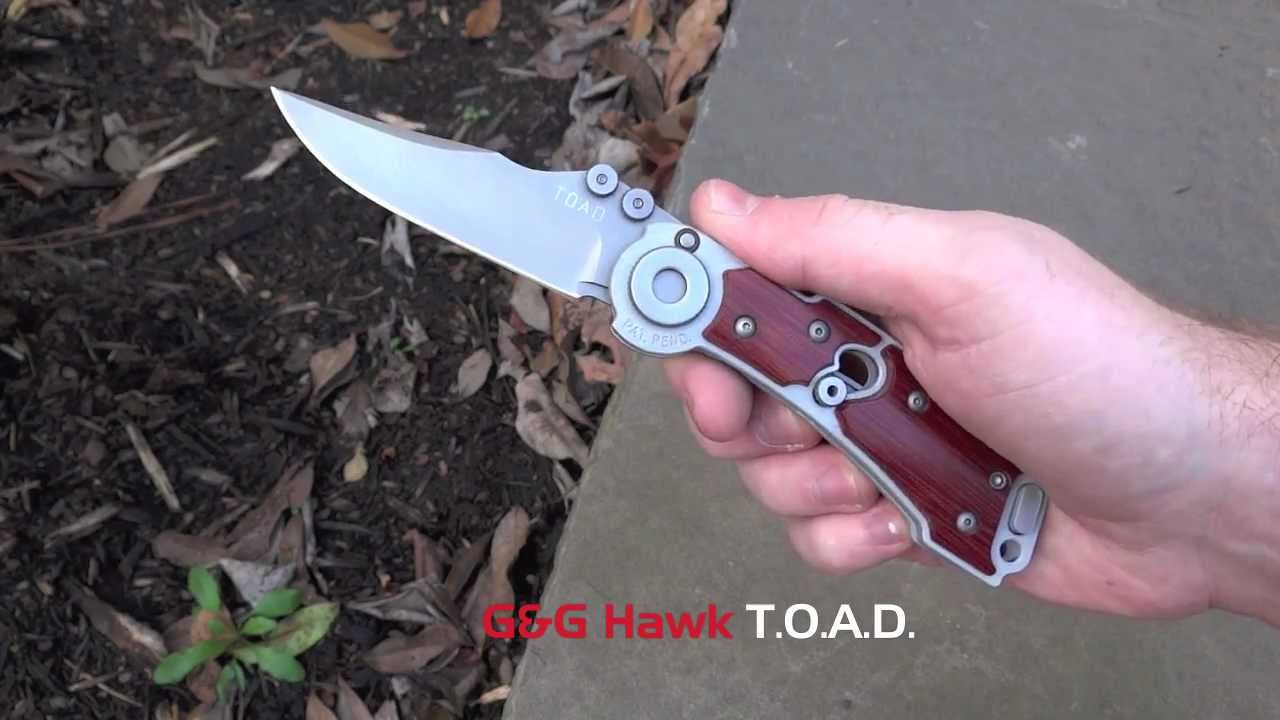 Hawk TOAD from review by Will Moon

The T.O.A.D. is an older design that they’ve updated slightly over the years to perfect. This knife has an interesting and almost futuristic design with overlays made from various materials. The four knurled plates act as dual thumb studs that allow for a reliable opening as well as a type of jimping for extra control.

But the real innovation is the lock.  The T.O.A.D. uses some of the same design elements as E.T. (which came after this one) but the toggle mechanism is inside. To disengage the knife, you pull the control pins in the middle of the handle back to release the blade. It’s a pretty cool concept and notable for the fact that unlike most of their other designs never went into production with a brand.

Check out this quick demonstration from Gavin: 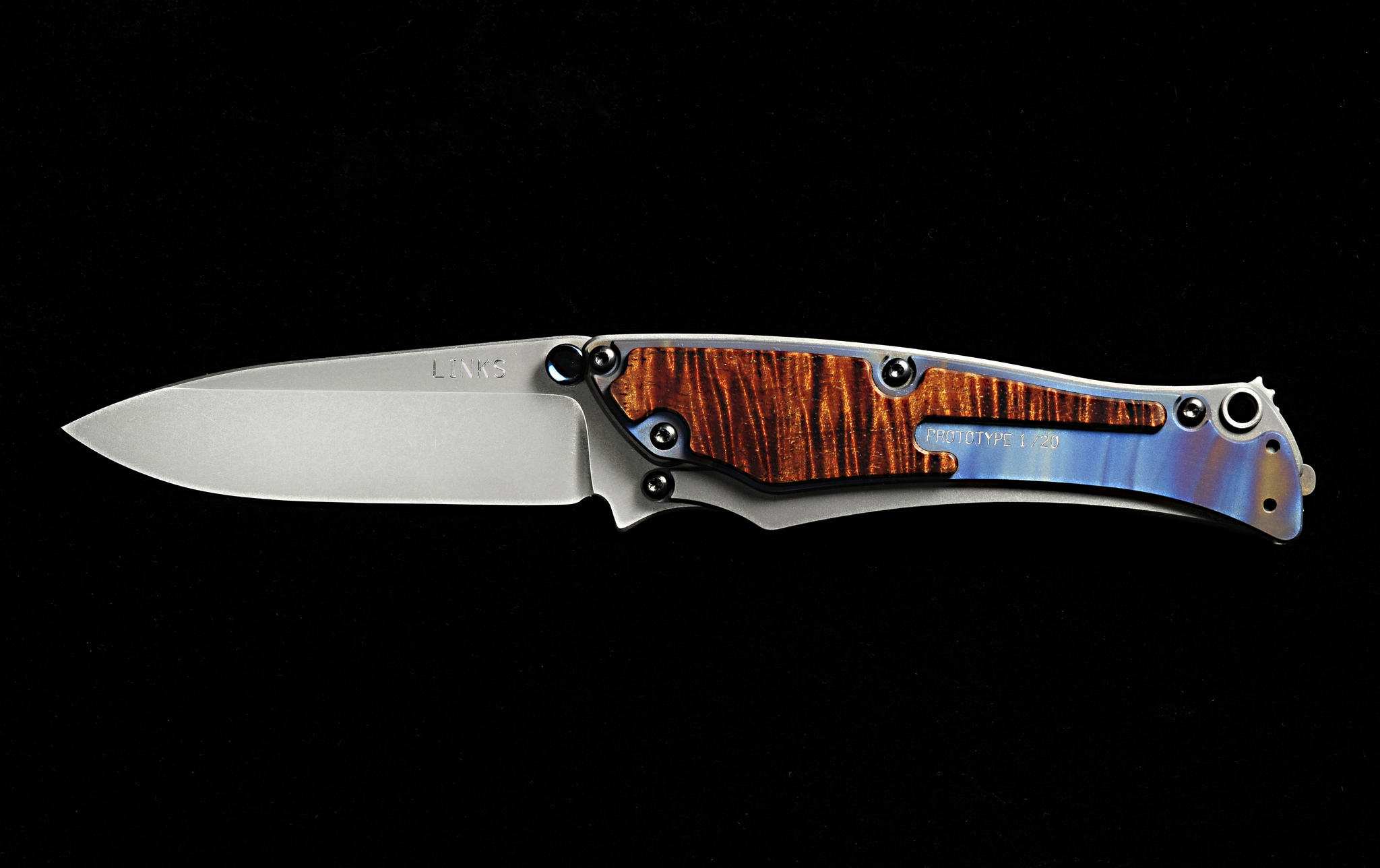 For a while the Hawks became fascinated with non-locking folders and the Links is a good example of what they could accomplish. The Links uses a flipper mechanism to engage the knife, but the magic comes in how everything works in concert. When the knife toggles open (somewhat similar to the concept of the E.T.), the knife can “lock” into place by gripping the linkages of the knife with your hand. For extra security, a small  safety mechanism can also lock the blade in place.

Here’s Gavko gushing over the design and the Hawks:

Unsurprisingly, the knife won the Most Innovative American Design at the BLADE Show. The Hawks let Boker pick up the knife, which was renamed the Griploc. It was our Badass Knife of the Week a few years ago and remains a top seller.

The Cyclops is probably the most visually different type of knives from the Hawks. The design was apparently one of the very first designs of theirs but they didn’t get any takers until Mantis came along. The Cyclops has morphed into its present day version as the Mantis Vicious Circle.

The Vicious Circle is a necklace/neck knife that looks like an unassuming ring until you give it a pull and a twist. It looks into place with a trigger lock and features a 1.5-inch hawkbill blade. The idea behind it is for a last resort self-defense tool or a convenient EDC you can use to open letters. It comes in 10 different iterations, including Stonewashed with Carbon Fiber Overlay.

The Beetle was the first non-locking knife that the Hawks designed. It uses a cool silicone rubber band (which they call a bungee). Like the Links, if you hold the handle of the knife it stays open. It also essentially acts as an assisted opening device as well. There’s reassurances that the band will last the entire life of the knife.

In 2011, the knife won Most Innovative Design at the USN show. The materials frequently used on the custom versions are premium, including carbon fiber inlays, titanium stop pins, and even Damascus steel. These non-locking folders may seem like novelty but they are excellent in places where you can’t have locking folders. The latest update on the knife is that they’re working on a redesign.

Check out this video of the midtech model from terafanatic:

Finally, we have the R.O.C.K.  This custom knife is very interesting in that it uses a lock called the Strap Lock. Here’s more about the idea of the lock from the Hawks’ website:

The lock was later used in the Buck Marksman and renamed the Strong Lock System (SLS). The design itself is somewhat like the now-discontinued Chris Reeve & Hawk Ti-Lock, which uses an external locking mechanism on the blade to free up space for the handle. I’ve heard a lot of great things about the Marksman lock.

Take a look at this review from the always entertaining Nick Shabazz: