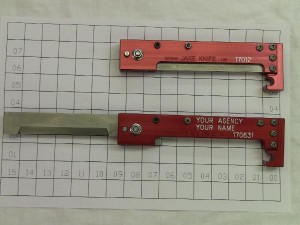 Size matters when choosing a pocket knife, at least according to Washington firefighter Tom Horne. I recently stumbled onto an article about Horne, who has constructed what may be the world’s largest pocket knife, the Jake Knife.

The Jake Knife has a blade that is nine inches long when closed, 16 inches when opened.  It’s made from stainless steel and has a liner lock.  According to Horne’s website, it’s capable of doing some pretty heavy-duty stuff, like:

Hacking through lumber, rope and other chord.
Prying open windows or doors
Disengaging the hood of car
Turning valves and couplings

Despite its prodigious size and strength, the knife is small enough to fit in the turn-out pocket of fire pants.  If you’re not convinced of how rugged it is, check out the video below where Horn demonstrates its various feats of strength while wearing his firefighter’s gear in the snow.

Also, if you were wondering about the origin of the name, experienced firefighters are often referred to as “Jake.”