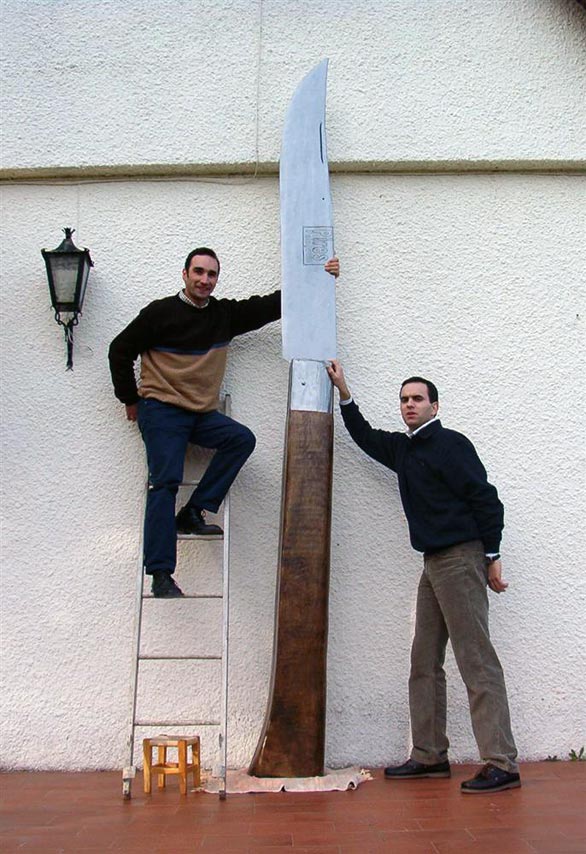 There has always existed the mantra that bigger is always better. For example, you have giant SUVs, massive airplanes and huge orders of french fries.

In our latest next installment of weird knives, one man took this mantra to the extreme by creating the world’s largest pocket knife.

I’ve heard a lot of people say they must own one of the world’s biggest pocket knives because they can barely get it into their pocket, but those people have obviously never seen this humungous knife, which is an astounding 12 ft. 8 in. when opened. This 268.9 lb definitely takes the cake (which is good because this knife could cut any sized cake).

The knife was designed by a Portuguese artist Telmo Cadavez and handmade by Virgílio, Raúl and Manuel Pires in 2003. It also holds a special place in the Guinness World Records.

Despite its impressive size, this kind of defeats the whole purpose of the pocket knife. If you can’t get it into your pocket (let alone a door frame), is it really a pocket knife?

I know this knife is probably only for artistic purposes and was never created for practical use (unless the designer was expecting Paul Bunyon to make a triumphant return), but the massive pocket knife is still pretty cool.

I have a few issues with the knife, however. One mistake while trying to open and close the knife could leave you holding a large and dangerous guillotine.

Also, even though it only officially holds the record for world’s largest knife, I’m sure it would hold the record for least portable knife ever. https://credit-n.ru/offers-zaim/vivus/

Out of kitchen knives? Consider using a MacBook