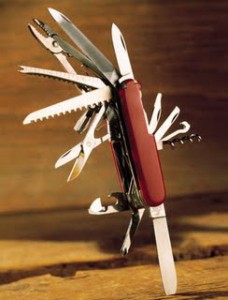 It happens to thousands of knife owners every year. You’re headed through security at the airport.  You’ve taken your shoes off, removed your belt and diligently placed your laptop in the required bin.  Then, as you’re walking through the metal detector, you hear the shrill beeping that signifies that something on your person is not allowed and you remember, suddenly, that you’ve completely forgotten about your pocket knife.

According to a 2009 CNN report, airports confiscate an estimated 13 million items annually. One of the most common are pocket knives.  Many Americans carry a pocket knife everyday, either as part of their key chain or as a work tool, and too often they don’t remember to put it in their checked baggage.  So, what can you do to avoid getting you knife swiped by TSA?  Here are some tips.

Pack your knife in your checked bag

According to TSA guidelines, the only knives you can carry on are ones with plastic or rounded blades (butter knives).  However, almost any knife can be transported to your destination, if it’s checked.  Want to bring your sushi knife on Christmas vacation?  You can check it.  Just bought a new samurai sword that you don’t want to part with?  Check it and you’re fine.

You can also check meat cleavers, sabers, ice picks, hatchets, axes and saws. What does all this mean?  When in doubt, check your bag.  Just remember, if you’re checking a sword, saber, dagger or other big blade, it needs to be properly sheathed.

But, what if you forget to check and get nabbed at security with your blade?

TSA provides those whose knives are confiscated with four options:

(1)  Return to the check-in counter and check your knife.

(3)  Give your knife to a loved one or friend if they have come to the airport to see you off.

(4)  Mail your knife.  Most airports have mailing supplies and a U.S. post office, which allows you to ship items to yourself.

Don’t stress out, you (probably) won’t get arrested

If you’re nabbed at security with a pocket knife, you won’t be subject to any criminal charges, unless it’s a switch-blade.  However, if you accidentally make it through security and onto a plane with your knife, you could potentially be charged with possessing a dangerous weapon in a secure area.

Last year, an Indian man slipped onto a plane with a 4-inch knife and was arrested when he attempted to cut fruit with it and then refused to give it to an air marshal.  If you make an honest mistake, simply turn your knife over without argument.

Also, be careful  if you’re flying abroad.  A 74-year-old American man was locked up for 9 days after he was caught with a small pocket knife at a Japanese airport.  Many other countries have much stricter knife laws then the U.S., so always check the knife laws of the country you are heading to.

If my knife does get confiscated, where does it go?

According to the TSA blog, your knife will either be donated to organizations like the Boy Scouts or sold on e-bay, with the proceeds going to state and local governments, which means that hypothetically you could end up buying your own knife back some  day.

Six ways to use a pocket knife

Top 5 Movie Knives (That You Can Also Own)