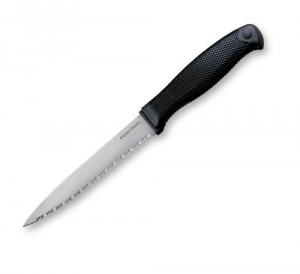 Imagine waking up in the middle of the night unable to breath. Your throat has swollen shut, and absolutely no air is getting into your body. What would you do?

Call 911? There’s not enough time. Give yourself CPR? Good idea but it wouldn’t solve this problem. Grab a knife? Bingo.

That was the first instinct of Steve Wilder when this exact scenario happened to him in 2008. The then 55-year-old man woke up to find his air passage had completely swollen shut and did what he thought was the best way to save himself. He ran to the kitchen, grabbed a knife and performed a tracheotomy on himself.

For anyone who doesn’t know what a tracheotomy is, you can check out an animation of what the surgery looks like here. It’s basically cutting a hole at the front of your neck to create an alternate air passage.

Since these are typically done in surgery or at least by another person, the fact that Steve Wilder did it to himself while most likely panicking from the lack of oxygen makes this even more impressive.

The knife that saved his life wasn’t a trusty pocket knife or survival knife, but a simple steak knife he grabbed from the kitchen. Had he been someplace where a knife was not readily available for him to use, there’s a huge possibility he would have suffocated. What’s even more admirable is that doctors said he would not suffer any adverse effects from his improvised operation.

Since swollen air passages and completely lodged items in the throat can strike at any time, I’ve attached a video below that explains how to perform a tracheotomy if necessary.

If you have any stories of a time when a knife saved your life or prevented a major injury, I’d like to know. Send me an email at [email protected]

Want to Toughen Up? Go To Roman Gladiator School