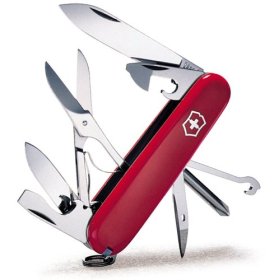 In the latest installment of our series detailing how knives save lives, we take to the skies.

On May 28, 1990, passengers of a routine flight to San Antonio were going about their typical business as the plane they were on entered the cruising altitude of 35,000 feet.

Everything seemed to be going normally until a woman frantically told a flight attendant that her 89-year-old husband didn’t appear to be breathing. According to the attendant, the man looked darkish gray and wasn’t responding. His immediate diagnosis was total airway obstruction.

So, the attendant did what everyone has learned to do for someone who can’t breathe. He administered the Heimlich Maneuver and CPR, but to no avail. The man was in deep trouble.

Luckily, there were two doctors a few sets behind who sprung into action. They knew his airway was completely obstructed, and there was only one device that could save this man: a knife.

When the doctors initially called out for a knife, someone handed them a cheap plastic knife, which simply wasn’t going to do for the job at hand. That’s when someone on the plane pulled out a trusty Swiss Army knife. Bear in mind, this was in the pre-9/11 era when it was fine to take small multi-purpose knives onto planes.

Similar to the story of Steve Wilder, the doctor performed a tracheotomy, which consists of cutting a hole in the bottom front part of your neck to create an alternative breathing passage. Check out the video in our previous post to learn more about the procedure.

After several minutes of being unable to breathe and tons of blood coming from the incision, the man remarkably began responding and breathing on his own. The plane was forced into an emergency landing, so paramedics could take the man to a hospital. Fortunately, the man survived the ordeal virtually unharmed.

The amazing thing about this example is there’s almost no way it could be replicated today because no one on a plane would have a knife on hand. Had there not been a knife readily available, the man would have definitely died from suffocation.

Knives in general, and especially on planes, get a bad reputation because of improper usage, but as these examples demonstrate, knives have the potential to save lives.

If you’re interested in hearing more details about this story, watch this clip from the show “Rescue 911.”

A Look at the Legendary Sub-Hilt Fighter