We’re all familiar with bayonets—knives that are attached to guns—but there’s one class of knives and guns you might not be aware of: the knife gun.

The knife gun (or gun knife depending on how you look at it) combines two of America’s favorite items into one seamless device. The major difference between a bayonet and a knife gun is that bayonets are affixed to the gun while the blade on the knife gun is usually built into the barrel. This offers much more stability and strength.

It’s difficult if not impossible to find any functioning knife guns for sale, most likely because they are novelty display items. That doesn’t mean they weren’t used in the past, however.

Several examples of knife guns have been found on sunken pirate ships that featured a large cutlass with a gun attached. The U.S. Navy even created one of these knife guns out of an Elgin pistol and a bowie knife (pictured above) to be used while on board a ship—where it makes more sense using than on a battlefield. 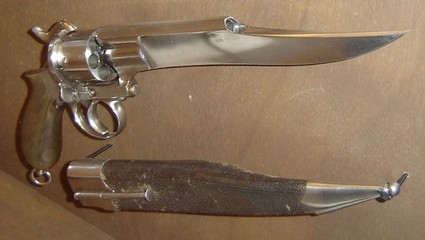 You also have more modern examples like the pistol featured to the right. Ultimately, as warfare evolved, so have weapons. As the need for knives in combat has diminished and the need for more tactical and versatile guns has grown, these typically expensive gun knives fell out of favor.

About the only place you can still find these types of knives are at San Juan Enterprise. Again, these are mainly collectors’ items, but they are still awesome.

It would be interesting to read about how effective these weapons were during that short period when they were a bit more popular.