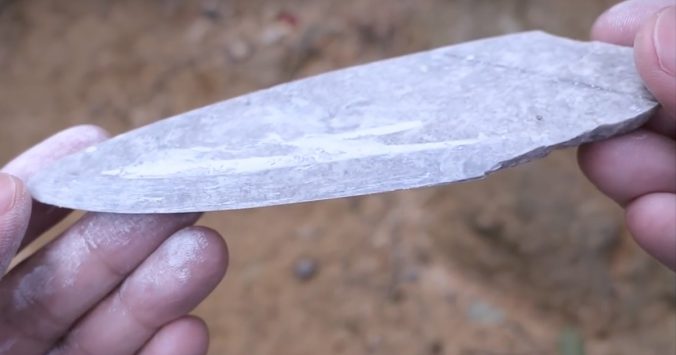 Watch YouTuber Make a Knife From a Stone

Kiwami Japan is one of the my favorite YouTubers out there. Not only do his videos show the process of turning some extraordinary material into a knife but they typically follow some sort of entertaining or bizarre story structure.

For example, his latest video saw his toy dog die and he had to make an unbreakable and unscratchable knife to hold its picture. I’ll just stick that here for your enjoyment:

But one of my favorite of his recent videos is a pretty straightforward video on making a primitive knife out of stone.

He doesn’t use any high tech materials (except for a small cow pitcher to deliver water). Over the course of a few days, he turns a jagged piece of stone into a knife that works as well as any stone knife could. It’s not a slicer but it’s pretty impressive considering what he starts with and what he uses to get to the final product.

Sure, the video is about 10 minutes of a guy rubbing stones together, but it’s just as hypnotic as many of his other videos. If you ever find yourself lost in the woods and need a knife to cut some cucumber, now you know how to do it.