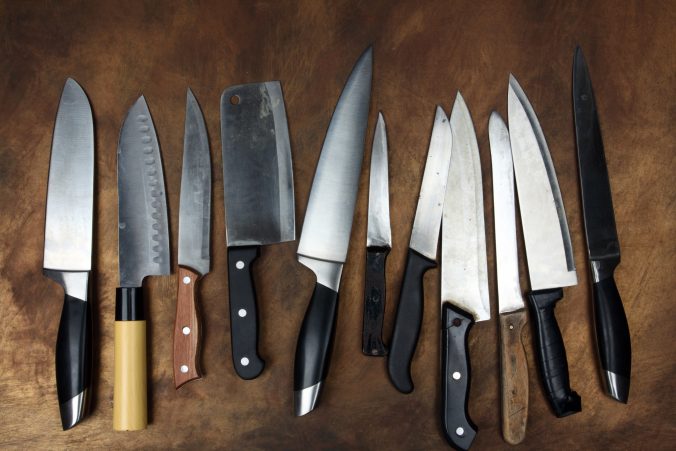 Collecting knives is a hobby that millions of people participate in. When your knives see frequent use, though, they’ll begin to dull over time. This is true even for the average kitchen knife.

Eventually, the cutting edge of the blade won’t work like it used to, and you’ll need to sharpen it back to its former glory with a steel or stone knife sharpener. Interestingly enough, not every knife collector knows how to sharpen a knife.

Not sure where to start? Don’t worry, we’ve got you covered.

Let’s take a look at everything you need to know about knife sharpening.

Why Do I Need to Sharpen My Knives?

If you use your knives on a regular basis, it only makes sense to keep them as sharp as possible whether they are straight edges like a chef’s knife or serrated knives. As you may expect, this will allow you to make sure they cut cleanly as they’re intended to.

A sharper knife will allow you to cut more precisely, which gives it far more utility over one that’s dulled over time. Interestingly enough, though, a shaper knife is actually safer than a blunt knife.

A dull knife can still cut, but it requires much more force to do so. A single slip or misstep could easily lead to injury with the amount of force behind the side of blade.

How Can I Tell If A Knife Needs to Be Sharpened?

Fortunately, it’s fairly easy to tell if your blade has become too dull and you need to sharpen your knife. You can test it through three simple methods:

If it fails any of these tests, it’s likely time for you to look into sharpening your knife’s blade.

How Can I Sharpen My Knife?

Although the process can seem intimidating to complete on your own, it’s a relatively simple process that doesn’t take too much preparation.

In general, there are three ways you can go about this process:

Let’s explore each one in-depth in order to get a better understanding.

Sharpening With a Whetstone

Before you use a whetstone, you’ll need to figure out the ideal sharpening angle for your blade. You can check your manufacturer’s website for more details, as this may vary from knife to knife.

In general, though, you’ll likely need to sharpen at a 20-degree angle.

To begin, completely submerge the stone in water for approximately 5 to 10 minutes. This should be enough time for any air bubbles to disappear.

Then, place the stone on a flat surface with its coarse side facing the ceiling. Afterward, place the blade on the stone at the correct sharpening angle. Make sure, though, that the blade is facing away from you.

With one hand on the knife’s handle and your other hand on the flat surface of the knife, apply a small amount of pressure and slowly drag the knife across the stone. Be sure to maintain the angle of the blade.

Eventually, a small bit of metal will begin to form over the edge of the entire blade. At this point, repeat the sharpening process on the other side of the knife.

Afterward, flip the whetstone over and fully sharpen both sides again to complete the process.

Sharpening With a Manual Sharpener

Manual sharpeners have two slots you’ll need to focus on: coarse and fine.

Beginning with the coarse slot, slowly pull the entire knife through while exerting an even amount of pressure. Four to six pulls should be enough, but older/damaged blades may require more.

Afterward, pull two or three times through the fine slow in order to finish the process. To test if your blade is sharp enough, use one of the three aforementioned methods (the sheet of paper is often the most convenient).

Sharpening With an Electric Sharpener

This process is highly similar to manual sharpening, but the result is often better for those who are inexperienced.

Afterward, repeat the same process with the fine grit slot on the electric sharpener.

If the blade isn’t quite as sharp as you’d like, repeat the above steps for half as many pulls in order to finish up.

How Can I Sharpen a Serrated Knife?

It may seem complicated at first to sharpen a knife with so many edges, but the process is almost the same.

It’s not recommended to use a whetstone. But, a manual or electric sharpener are both viable options. Make sure, though, that you only use the ‘fine’ slot on either one to ensure the blade isn’t damaged.

How Often Should I Do It?

In general, you’ll likely only need to sharpen your knives every 6 to 12 months. With heavy use, though, you may find that your blades dull quicker than this.

To keep your knife as sharp as possible between full sharpenings, use the fine slot on a manual or electric sharpener after every use or two.

Understanding How to Sharpen a Knife Can Seem Difficult

But it doesn’t have to be.

With the above information about how to sharpen a knife in mind, you’ll be well on your way to keeping your blades in the best condition possible.

Want to learn more about how we can help? Feel free to get in touch with us today to see what we can do.

The Complete History of the Shuriken: The Ninja Throwing Stars