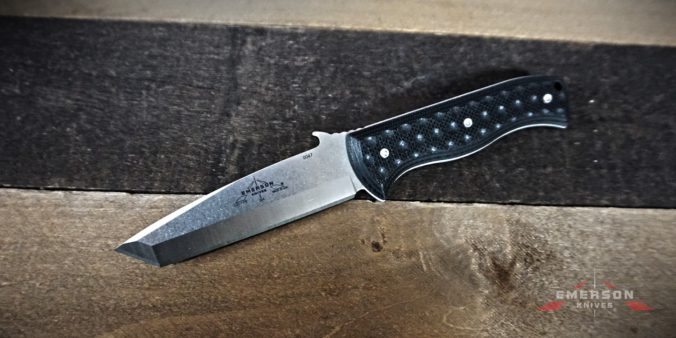 Designing a knife is hard, so imagine how difficult it is to successfully design a knife that can be made into both a fixed blade and a folding version without sacrificing comfort and functionality.

Well, the designers of these knives managed to do so with a aplomb.

Check out some of the best knife designs you can pick up in either a folding or fixed blade iteration.

Let’s start with an all-time knife: the Buck 110 Folding Hunter. This is one of the most successful pocket knife designs ever, becoming so ubiquitous that the style is simply known as a buck knife. So you might find it so surprising that it took Buck more than 50 years to turn the iconic knife into a fixed blade.

But that’s what they did with the Buck 101. It’s been met with very positive reviews.

Shane Sibert designed the 275 Adamas folding knife as a heavy-duty work knife. It’s frequently called one of the most durable work knives out there with its thick handle, liner, and blade. The success of the knife prompted Benchmade to add an automatic version as well as a fixed blade version.

The 375 Adamas fixed blade is a somewhat pared down version of the folder. It has a longer 4.2-inch blade vs the 3.82-inch blade of the folder and the handle is skeletonized. By its very nature, the fixed blade version may be a better workhorse knife for tougher tasks.

Gerber has a few models that come in both a fixed and folding version. The Gator is one of their best, however. The Gator was first introduced as a folding knife — it was so revolutionary at the time it won Most Innovative Knife of the Year at BLADE Show. Gerber has made a few other iterations and the knife has evolved over the years.

The regular folder is visually different than the fixed blade. The more recent premium versions are better family members. Both have S30V steel blades, similarly textured rubberized grips, and polished bolsters. One has a clip point and the other a drop point.

Lucas Burnley has made quite a name for himself as a knife designer but he is most famous for his Kwaiken design. Boker calls it one of the most influential knife designs of the 21st century. The Kwaiken started out as a Japanese inspired fixed blade with clean lines. The knife made its biggest splash when he turned it into a sleek folder.

Eventually, he returned the knife to its fixed blade roots with the Boker Plus Kwaiken Fixed. The designs are very similar and they both work well.

The Benchmade Infidel may be the brand’s best-selling automatic knife. The knife is an out-the-front automatic knife with great action and adequate materials. For those who enjoy the knife but can’t own one due to laws, they made recently made a fixed blade version (though daggers are illegal a lot of places too).

The fixed blade removes some of the fun of the original but the general design remains good for this kind of knife.

There’s a trend for which models get turned into a fixed blade (and vice versa): they are usually icons. This one is no different.

The CQC-7 is a production version of the truly iconic and renowned CQC-6 from Ernest Emerson. After years of success, Emerson just decided to offer a fixed blade version of the knife. The tactical design doesn’t naturally lend itself for an exact conversion. But the designers decided to leave the Wave feature anyway, despite being useless on fixed blade (it does provide a nice thumb ramp though).

The Ronin is an interesting knife because it was one of the first knives to usher in the use of the Wharncliffe blade for tactical applications thanks to Michael Janich. I wrote about the Wharncliffe blade and the background of this knife so I won’t rehash it but Mike Snody made the Ronin from Janich’s specifications. It was picked up by Spyderco, which later made a folding version.

The latest versions are the Ronin 2 and Yojimbo 2. Ironically, the Yojimbo 2 was actually based on the Ronin 2 as Janich said in a post on Spyderco’s forum:

The Ronin 2 literally started with my friend Mickey Yurco tracing around the Yo 2 on a piece of paper and making me a custom fixed blade. When Spyderco saw it, they put it in their prototype case and liked the positive response we got from the public. There was very little R&D involved in the development of it, other than me grinding off the “peak” at the top of the handle (where, on the folder, the handle and blade would meet) to make it Kydex-friendly.

Kiku Matsuda is a master blade grinder and polisher. In 2014, Matsuda partnered up with SOG to bring his knives to the masses in a line called the Kiku. The line is a mixture of fixed and folders but the knives all retain Matsuda’s insane blade grinds and shape along with micarta handles.

You’ll be thoroughly impressed by the grinds, but maybe not so happy with the sharpening.

The third Benchmade on this list is the Contego — the brand does love its fixed blade crossovers. Like the previous three Benchmade knives, the Contego started its life as a folder from Warren Osborne. It is a tactical knife with a unique blade shape, aggressive handle texture, and glass breaker.

The fixed blade version retains the aggressive lines of the folder but removed any chance of error or failure by taking out the moving parts. It has pretty positive reviews.

Gerber has a few of these knives as well. I was torn between the Moment and the Myth. I went with the Moment for a few reasons. The Moment is a great hunting knife that’s dirt cheap. The fixed blade has a 3.6-inch blade that uses awful blade material. The folding version has a 3.5-inch blade and a very similar design — except for a cutout in the blade that acts as an opening notch.

There’s also a smaller Moment folder with a similar design but it’s not the same as the other two. 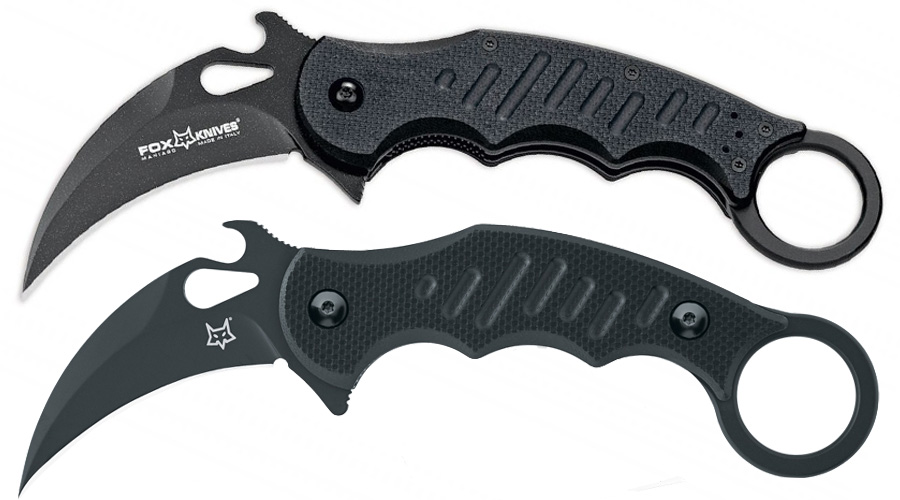 The Fox 479 Folding Karambit is one of the best karambits out there. However, most karambits are typically fixed blades. So Fox put some glue in the pivot and made it a fixed blade (figuratively speaking, of course).

The fixed version is identical to the folder. It even has the Wave feature and flipper protrusion. Despite these unnecessary inclusions, the fixed blade karambit is great. 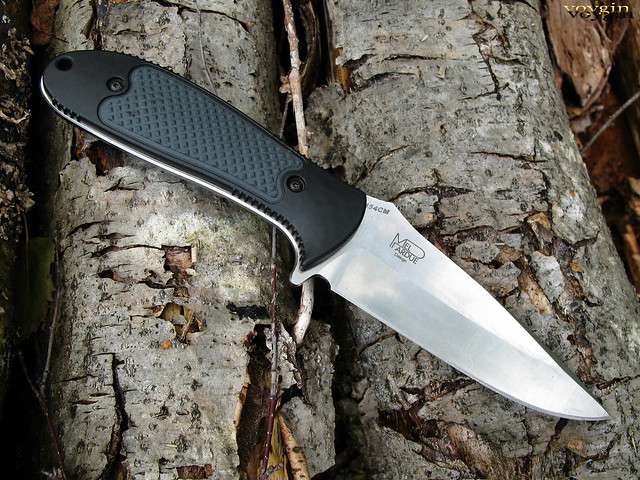 For a brief but wondrous time, Benchmade sold a fixed blade version of its iconic Griptilian model. The knife was much larger than the standard grip with a roughly 4-inch blade vs the 3.4-inch blade of the regular Grip.

It wasn’t spectacular in any way, but once it was discontinued, a lot of people lamented its disappearance.