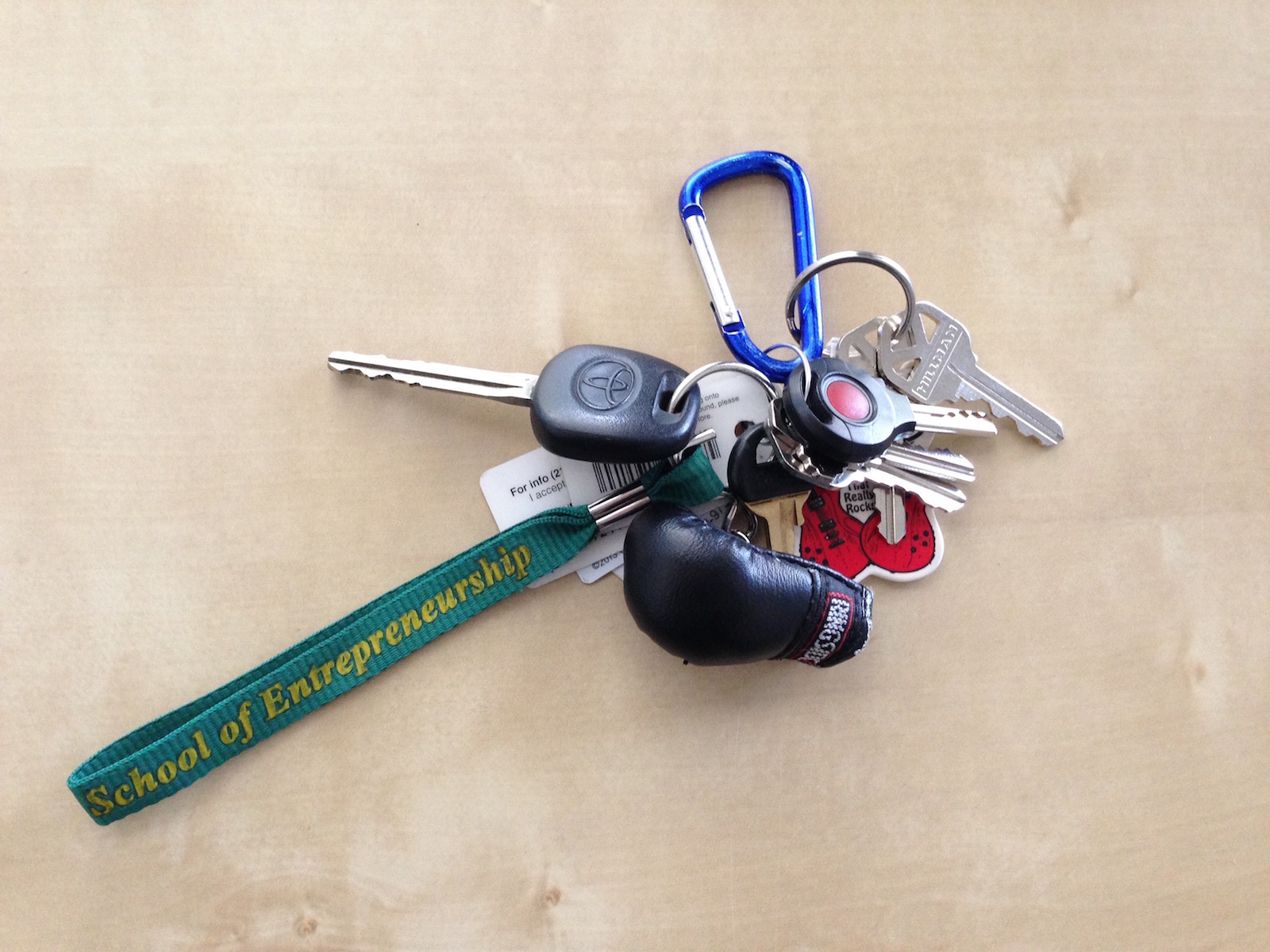 Those were my keys.

Take a good look at them. I know they’re a mess.

As someone who prides himself on being organized, efficient, and constantly prepared, I felt thoroughly embarrassed whenever I reached for the jingly jumble of chaos.

I knew I needed to switch things up, to rethink the way I organized my keys. So I looked to KeySmart. I’d seen KeySmart countless times while browsing through knife sites and Instagram accounts centered around EDC items.

For those unfamiliar with KeySmart, it’s a minimalist keyring that started out as a project on Kickstarter. Needless to say, the project was successfully funded and shattered its goals with 15,000 backers pledging a fair amount of money. They’ve since become a full-on business with an updated design and everything.

I admit, I was skeptical at first. This thing seemed unnecessary and gratuitous. Humans have carried keys around the same way for hundreds of years. Why do we need to change it? That’s when I realized I was being daft. Bucking the norm and finding better ways to do old things is how we came up with a bunch of cool inventions.

So I reached out to KeySmart, and they were kind enough to send me one to review. Here’s what happened.

Before going into the transformation, we must start with the original hodgepodge of novelty plastics and metal I called my keys.

Let’s break down what I had on my keychain:

Most of these items were acquired on the fly, which is how my keys devolved into such madness. (Yes, I know they’re not as bad as many of yours, but it still really bothered me, especially since I didn’t even have that many keys!)

The quest for efficiency and simplicity demonstrated by KeySmart was instantly obvious from the packaging. Unlike the bulky containers of most products, the KeySmart arrived in a minimalistic package that only had a few things. 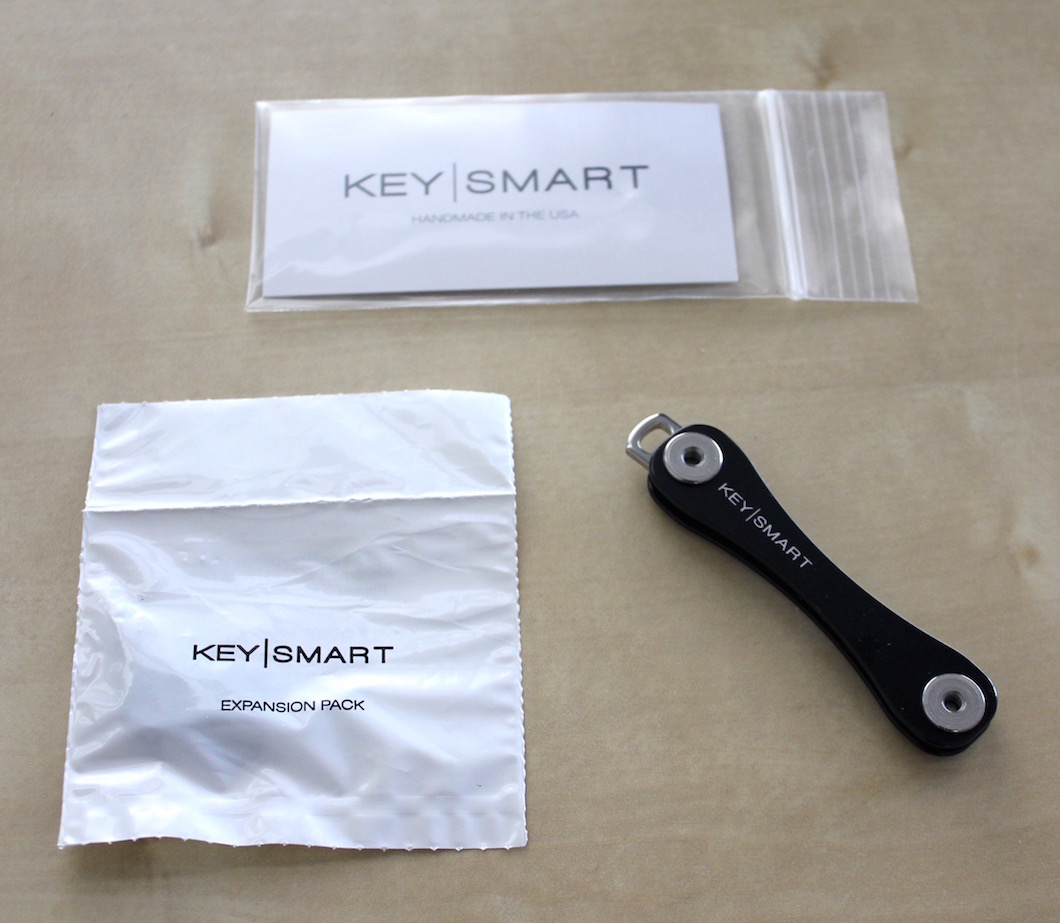 As you can see, the package came with three items. The first was a small sealable bag which contained the actual product and a piece of paper with some info. Next was the expansion pack (which we’ll get to later).

Here’s what the card says:

Where are the instructions? They’re online at the company’s website getkeysmart.com. In a way, since the KeySmart itself isn’t the most intuitive thing to set up, not having instructions with the card was risky. But the vast majority of people have quick and easy access to the Internet, so I don’t think it’s a big deal.

Before we continue, let’s examine the specs of the KeySmart.

The basic KeySmart (now called the KeySmart 2.0 because it’s a new design from the Kickstarter campaign) is three inches long and a little more than half an inch wide from its widest point. The body is made from aircraft aluminum and features the laser-engraved logo, which is much improved upon from the original). The two screws that hold the plates together are made of stainless steel, as is the included polished loop. 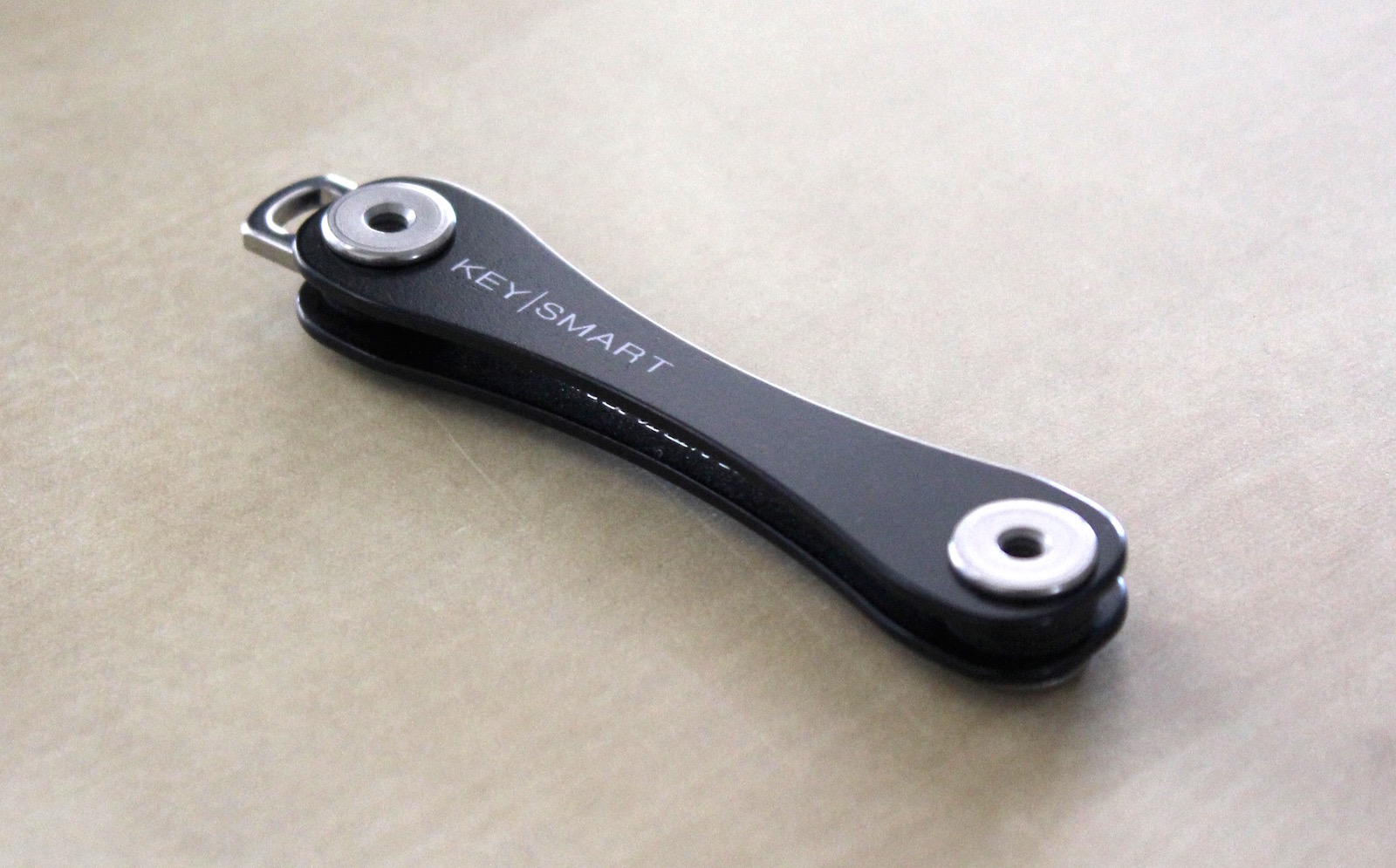 The one I received is a sleek black, which I love, but you can also get the KeySmart in eight colors (blue, black, red, green, purple, orange, slate, pink).

If you want the KeySmart Titanium, it’ll cost you $38.98. There’s also an extended version of the KeySmart that’s mainly for foreign keys, which tend to be longer. That one’s $20.98.

Now it’s time to dive into the assembly.

As I said before, the product didn’t come with instructions, so I went to the site for a quick tutorial.

I removed the two screws (a coin did the trick) to separate the plates. Then I placed the plate with the logo face down and started stacking the keys before running into a problem.

Since I had four keys and really wanted the loop, I took the keys off and added on the expansion pack by screwing the posts onto the existing one. In order to make the keys and loop line up perfectly flush with the post, I had to use a spacer they provided.

I screwed the second plate back on (which was harder than it sounds) and the KeySmart was finished. 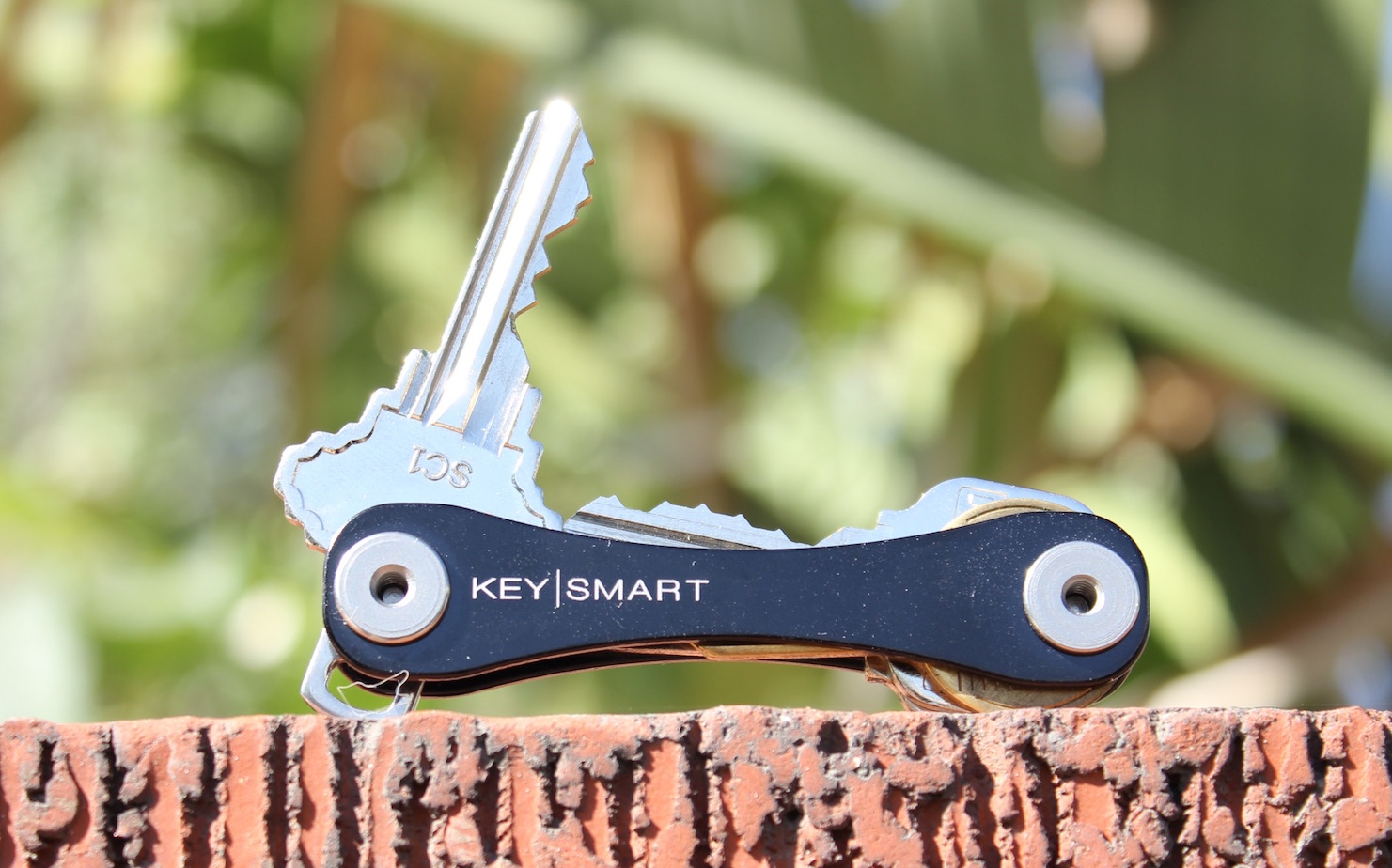 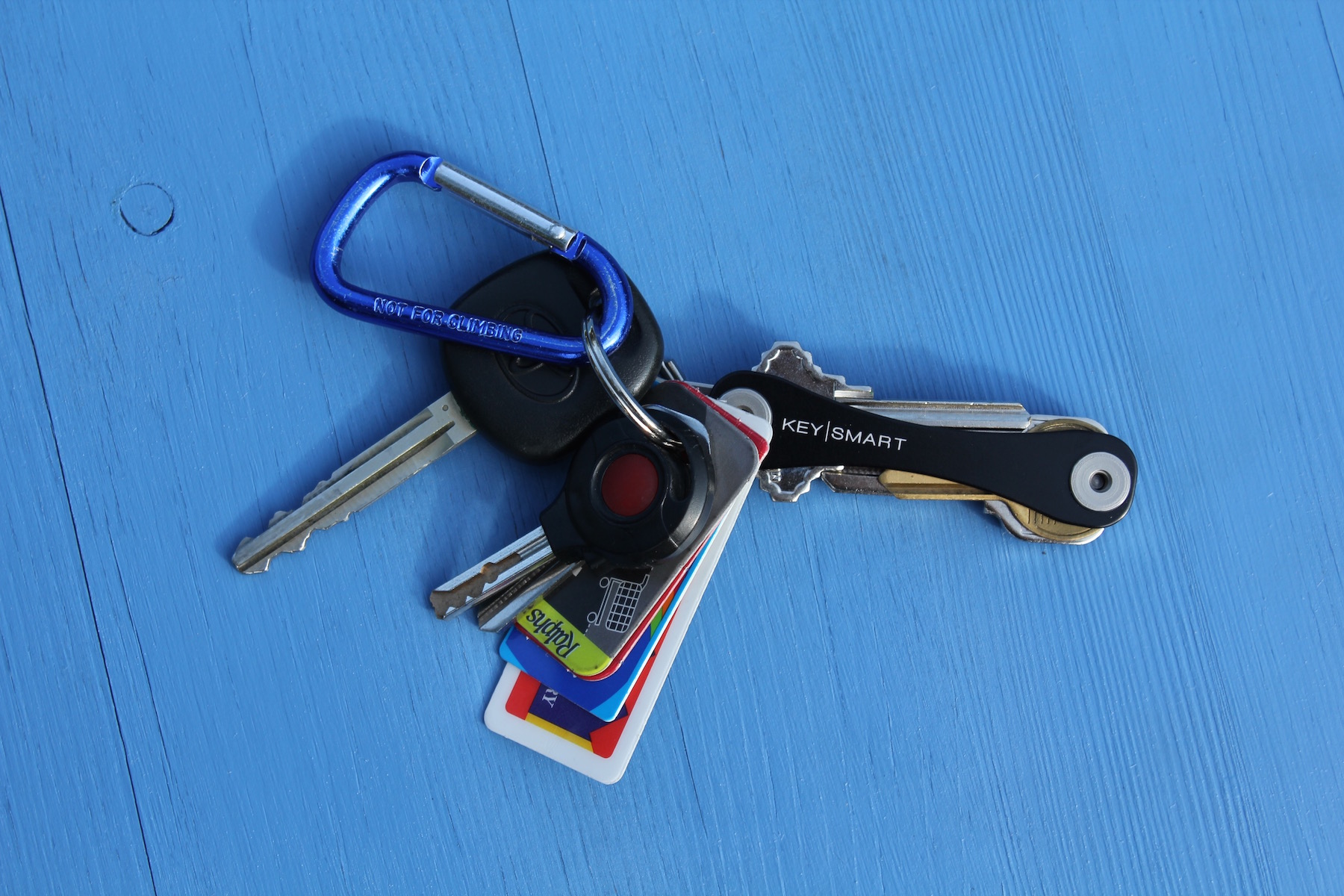 Let me preface this by saying this is my own situation and your opinion of the KeySmart will depend on your setup: I went in expecting a game changer in how I carried my keys but was somewhat disappointed.

The main issue I ran into was the fact that two of my keys didn’t fit in the KeySmart. My car key and bike lock key were simply too bulky and nonstandard to fit snugly into the KeySmart. I managed to get my garage key into the KeySmart after removing its cover, but those two keys had to remain in the open.

KeySmart also doesn’t have a place to put those pesky loyalty cards. I despise them, but use them enough that they are 100% necessary. (Yes, I know there are apps out there that congregate the information of loyalty cards, but they do so poorly.)

Although most of my keys were consolidated into KeySmart, I was still left with two bulky keys and an assortment of loyalty cards. At no fault to KeySmart, I was hoping for something that would make my keys look like so many others I had seen on Instagram. The upside was that the two keys, cards, and KeySmart would all fit on a single loop.

As a result, I simply left the house key out of the KeySmart and fixed that problem.

Even though that just added to the continued bulkiness of my keys, I was confident in my decision keeping my most used key out of the KeySmart.

Although it may sound like I’m not a fan of the KeySmart, that’s far from the truth. Not only do I enjoy the design and look of the minimalist tool but it really did cut down on the bulk.

Getting the KeySmart helped me cut the fat from my keychain—like those unnecessary novelty chains—and create a much leaner carry system.

My keys no longer clank around noisily when I wear them on my belt loop and it does make opening doors easier, especially if you have arthritis or hand pain.

Even after using the KeySmart for a few months, the exterior remains largely unscratched and sleek-looking.

Should you buy the KeySmart? It completely depends on your current key setup. I found the KeySmart lacking because of the fact that I only had a few keys that would actually fit in the holder, but if you have more than six standard keys hanging on your chain, then the KeySmart is a no-brainer. It’ll simplify your keychain, get rid of the annoying jangling, and save some space. Not to mention it looks great, comes in a variety of colors, and is well designed.

Also, if you have an assortment of nonstandard car keys, car fobs, and loyalty cards, don’t go in with the expectation that this will hold all of those items and completely transform your keys. You’ll be much more satisfied with the final result.

I’d especially recommend this to those who enjoy showing off their everyday carry items because it just looks so damn good in EDC pocket dump photos, doesn’t it? 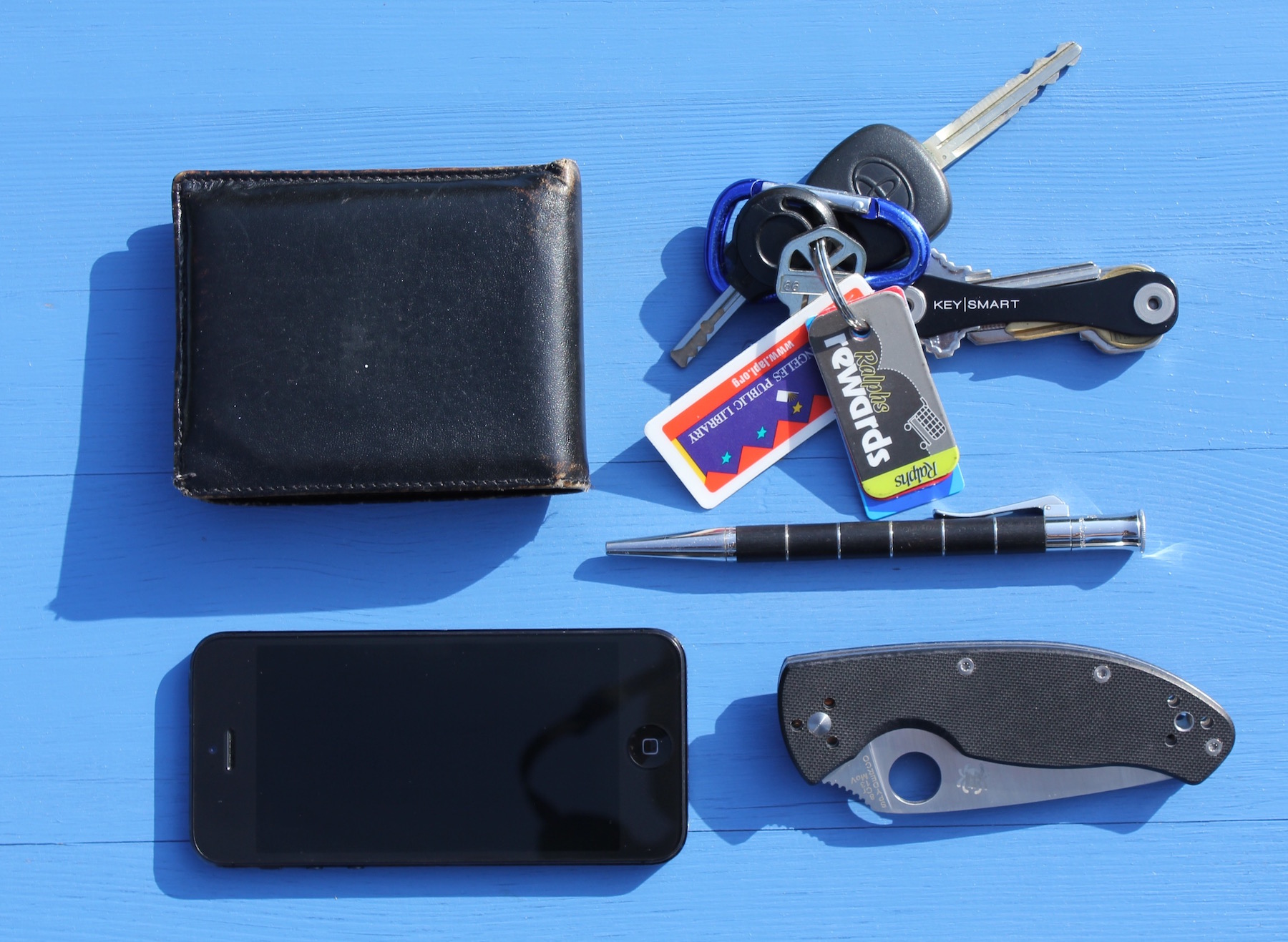 You can find out more and buy a KeySmart at getkeysmart.com.

Buck 245 Matt Would Go – Badass Knife of the Week