How old are knives?

When you’re using a Swiss army knife on a camping trip or a steak knife to cut up a tender rib eye, do you ever think about how old the blade you’re cutting with truly is?

Knives are some of the oldest tools on the planet. They date back to the Stone Age, approximately two and a half million years ago.  Throughout history, almost every major culture has used some form of knives.  A few recent discoveries have shed light on some of the more unique knife specimens from the past.  Check them out. 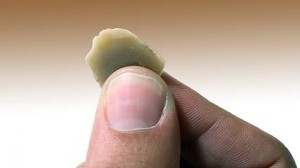 In July, researches in Tel Aviv, Israel discovered tiny flint knives, which they believe were used to cut meat.  These shards of stone, approximately the size of a quarter, were found around the remains of a fire and adjacent to the carcasses of animals.

Archeologists speculate that these knives were used to cut the meat of animals such as horses or rhinoceros.  The knives would have only been used for a short time and then discarded after they lost their sharpness.  They were likely created by chipping shards off stones

A precursor to the Swiss Army Knife, the Roman army knife had many similar features.  This knife was made from silver, but had an iron blade.  It features a spoon, fork, spatula, and retractable spike.  Researchers speculate that the spike may have been used to pry snails from their shell.

It’s possible that, because of its complexity, this knife was owned by a wealthy traveler who had it custom made.  The knife was discovered in the area of the Mediterranean and is currently on exhibit at a museum in Cambridge.

When researchers find mummies from the past, they are often carrying knives as well.  The discovery of Otzi the Iceman, the oldest naturally-preserved mummy found in Europe, was accompanied by the recovery of many of his tools, including the flint knife he had.

Because of their resourcefulness, knives have spanned millions of years and will likely be around for millions more.  That’s food for thought and something to consider the next time you’re slicing up a flank steak or whittling a stick with a pocket knife.

The world’s most expensive knives

In Vidalia, the ghost of Jim Bowie comes alive