6 ways to use a pocket knife 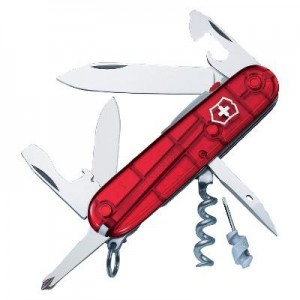 The pocket knife is an iconic tool carried by outdoorsman, craftsman and everyday men and women across the world.  The reason for its popularity is clear; it’s simply one of the most functional tools available today.  Here are a few great uses for carrying a pocket knife.

There’s nothing worse than spending half of Christmas morning watching your brother and law struggle helplessly with a Land’s End box. Of course, if you were carrying your trusty pocket knife, you would be spared this annoyance and could move on to other gift-giving.

With their variety of blades, pocket knives are excellent tools for opening boxes.  Don’t want to sully your hands opening letters?  Impress your co-workers at the office by opening them up with your pocket knife.

Camping without a knife is unforgivable.  From shaving down kindling to roasting hot dogs on the fire, you need a pocket knife.  Of course, there’s always a chance you might have to fight off a rogue bear with your pocket knife as well, like this guy did.

A pocket knife with tweezers can also come in handy if you’re out in the wild and end up with a tick or a fat, nasty splinter.

This one couldn’t be more obvious.  A fisherman without a pocket knife isn’t a fisherman;  he’s just a lonely guy drinking beer next to a lake. From cutting line to removing hooks, a trusty pocket knife is mandatory for any fisherman.  Plus, if the fish aren’t biting, at least you can use the bottle opener on your knife to pop open a cold brew.

From cutting bandages to fashioning tourniquets, you never know when a pocket knife can come in handy.  They’re also great for freeing hostages who have been bound in rope, though hopefully you’ll never encounter that.

On a more serious note, if someone does get injured while you’re outdoors, a pocket knife can also be used to carve messages to other parties along the path.

This one I swiped from a great post on the blog the Art of Manliness. There’s really nothing tougher-looking than sitting on your stoop and gnawing on an apple you peeled with you own blade.

A pocket knife doesn’t make much of a weapon, nor is it designed to be one, but if you do find yourself in a sticky situation it may be enough to fend of or at least slow down an attacker.

Happy Labor Day. Here’s a tutorial on how to sharpen a pocket knife