How Google Sliced Away Our Knife Ads

Update:  A few people have asked if they can see emails between Knife Depot and Google Adwords staff.  The short answer is yes, if it’s something you’re interested in writing about, then just email me at [email protected]  I also added an excerpt lower in the post, in which a member of the Adwords staff reveals his own disgust at the “double standard” Google is applying to big brands.

For seven years, Knife Depot has been selling top-quality blades over the Internet to the jubilation of knife lovers everywhere.  And for the last two years, we’ve been writing about knives and knife culture on The Cutting Edge.

However, recently, something has threatened our ability to promulgate our large selection of knives to the legions of blade lovers across the world:  Google has shut down our AdWords Account.

AdWords, if you’re not hip to the Internet jive, is a Google advertising program that allows companies to place text-based ads next to specified search queries.  To the user, it looks like this: 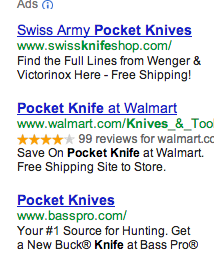 Up until late February of this year, Knife Depot had generated a good slice of its revenue from Google AdWords.  We’d also been careful to not ever violate Google’s Adwords weapons policy, which prohibits “the promotion of knives, such as butterfly knives, (balisongs) and switchblades.”

For this reason, we were shocked when last month Google told us they would be terminating our AdWords account unless we removed all of our “assisted opening knives,” which are legal, hugely popular across the U.S, and not prohibited in Google’s policy.  Assisted opening knives, if you’re not aware, differ from switchblades by the fact that pressure must be applied for them to be opened.

After some deep thinking, we decided that serving our customer base, who legally buy large amounts of assisted-opening knives, was more important than continuing to advertise with Google. For this reason, we decided to not remove the knives and forgo our Google Adwords account

Of course, we expected that our fellow knife vendors would be subjected to the same anti-knife policies, and be forced to make the same decision of whether or not to advertise with Google or sell assisted-opening knives.

While Google shut down the AdWords account of a few other Internet knife vendors, it has continued to allow large brands such as Walmart, Amazon and Bass Pro Shops to sell assisted-opening knives and advertise on Google Adwords.

Just check out the images below from Amazon.com and Walmart. 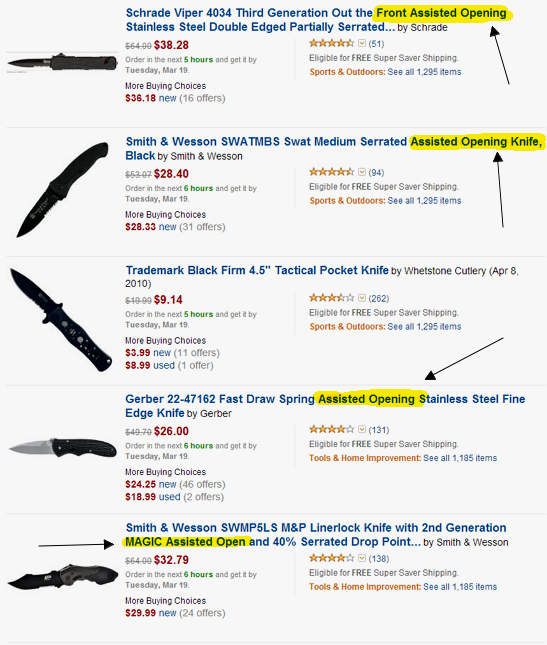 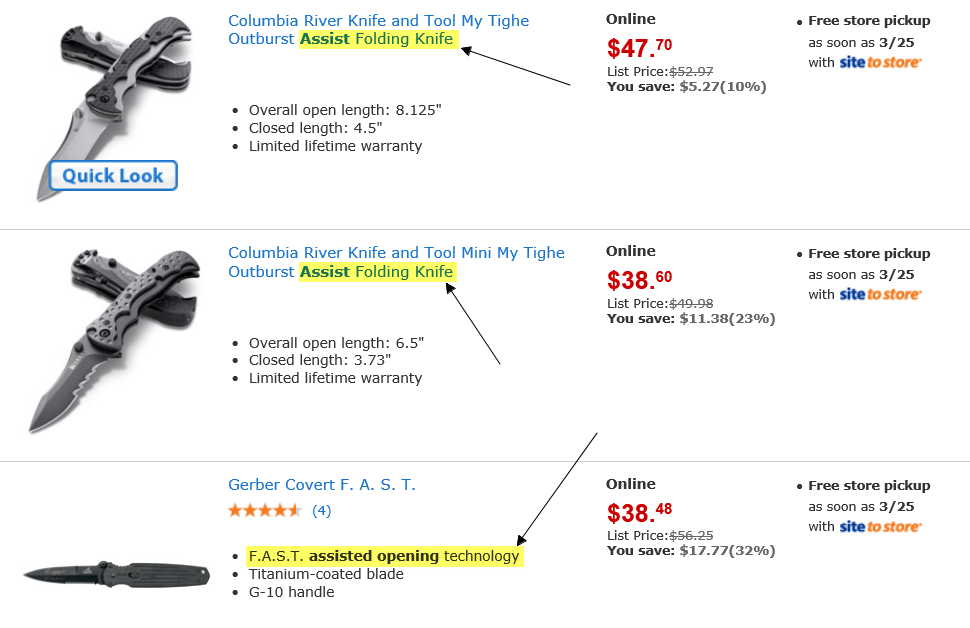 Yes, the world is unfair.  And yes, we have contacted Google on numerous occasions about this blatant favoritism toward big brands and despite assuring us that they would rectify it, they haven’t. In fact, even their own staff was sickened by the hypocrisy, as you can see from this February 28th email excerpt from a Google employee.

So for these reasons, we wanted to let you guys, loyal Cutting Edge readers and Knife Depot fans, know that you might not be seeing Knife Depot ads peppered across the Internet.  However, rest assured that it’s not because we’ve softened our commitment to build the world’s most badass knife store, not even one bit.

It’s just because The Man tried to put his foot on our throat and say, “Hey, stop selling those badass assisted-opening blades,” and we refused, so The Man shut down our ads.

However, what the Man didn’t realize is that though he might be able to shut down our ads, he’ll never crush the desire of knife-loving men and women across the country to own perfectly legal and totally badass spring-assisted blades.  And he’ll never stop us from selling them.

We appreciate you being a part of the Knife Depot family and we hope, despite our absence from Google Adwords, you continue to buy knives on our site. Oh, what’s that, you want me to end this blog post with a razor-sharp video of our top-selling assisted-opening knife?