Why Does Google Lust for Amazon and Loathe Knife Depot?

Imagine if the most powerful Internet company — one that handles 100 billion searches for information a month — prohibited everyone except for the world’s largest e-commerce store to advertise for a specific product. What would that look like? It would look like this. 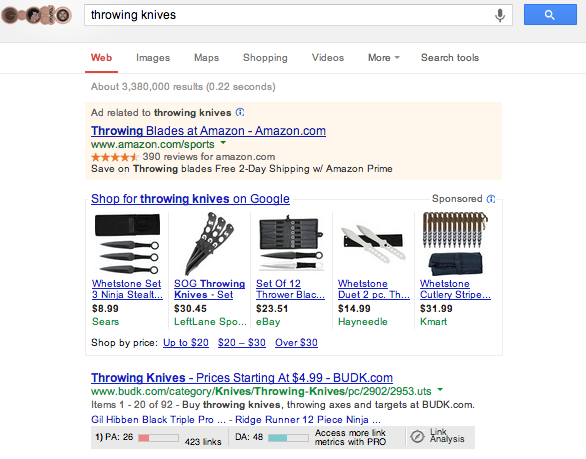 Above is a screenshot for the search term “throwing knives,” one of our most popular categories at Knife Depot.

We used to to run Google AdWords for throwing knives, but in May, Google turned off all ads for the search term “throwing knives” after they designated it a weapon. Obviously, we disagreed with such a characterization, but weren’t surprised, as in March Google had prohibited all ads for “Assisted Opening Knives” and canceled our entire AdWords account because we sold completely legal spring-assisted knives.

We were eventually reinstated on AdWords, but now for the second time Google has banned our ads for specific products, while Amazon continues to advertise for those products. And it doesn’t end with throwing knives either. Who’s currently running ads for the term “assisted- opening knives?” 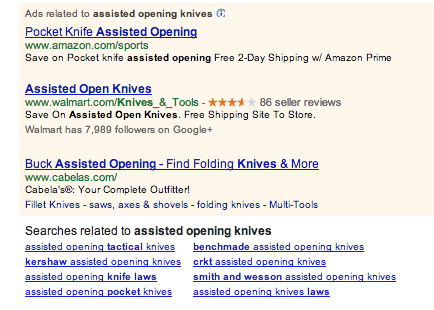 Yeah, you guessed, Amazon is in the house, joined by Walmart and Cabella’s. It’s a mega-brand menage-a-trois, with poor Knife Depot relegated to the sideline.

If you looked a year ago, there would have been probably close to a dozen sites advertising for this term. Now, it seems that Google has managed to successfully eliminate all advertisers except for their big-spending compadres.

That’s a fantastic question and one that your pals at Knife Depot have asked ad nauseum to AdWords support staff over the last year. Over hundreds of emails, Google has rarely countered our claims that they are favoring big brands. In fact, in one email this spring a customer service representative affirmed our point:

Google’s AdWords support staff is an intractable bureaucracy that makes decisions based on policy edicts that they seemingly have no power to influence or change. Clearly, one huge element of that policy is to never take down ads or suspend the accounts of big-spending AdWords partners.It happens in organic search, too

Google’s relationship with mega brands — specifically Amazon — are well documented and were even investigated by the Federal Trade Commission in 2010. Many web marketing professionals say that Google’s organic algorithm is tilted toward large brands as well. Aaron Wall, of the site SEObook.com, has pounded away at this issue and put together this great infographic chronicling the rise of brand importance to Google over the years.

At Knife Depot, we’ve experienced Google’s small-business crushing desire to elevate Amazon to the top of search engines on our organic results as well. For close to two years, we’ve held the number one position for the search term “throwing knives.” Yet, just this week, a single Amazon product page overtook our entire category page. 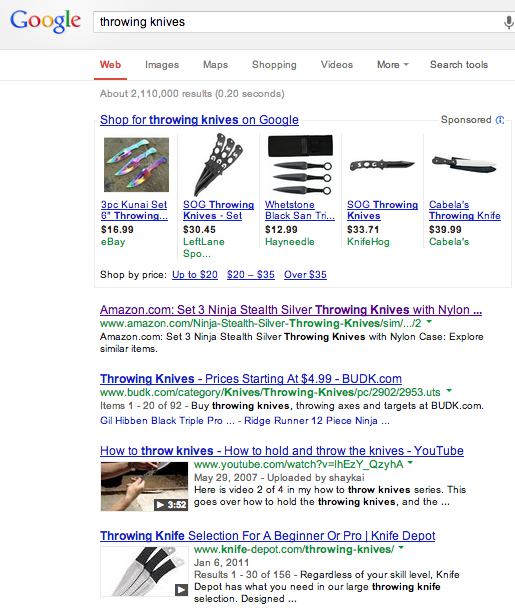 We never expected to hold that spot forever, but we at least hoped that it would be sites that specialized in knives that would overtake us.

The bottom line is that by providing advantages in both organic and paid search to big brands like Amazon, Google is exacerbating an already uneven playing field. Companies like Knife Depot, a 10-person outfit based out of Prairieville, Louisiana, are literally having their business sliced away.

We sell knives; that’s our livelihood. Meanwhile, the massive brands, who sell anything under the sun to make a buck, routinely skirt Google’s regulations. And it’s not just in the realm of knives. If reading this blog post makes you despondent and feel the need to get high, don’t worry, Ebay has your back. They’re apparently the only company allowed to run ads for “herbal incense,” an intoxicant that mimics the effects of marijuana and is banned across much of a country. Go figure, huh.

What can you do to stop the mega-brand advantage?

If you think Google’s preferential treatment of mega brands is unfair, then sign Knife Depot’s petition at Change.Org to demand a merit-based search algorithm that doesn’t favor big bands.  Let’s ensure the Internet is a place where businesses of all size can compete fairly.

Why Do the Internet Gods Hate Knives?

Watch ‘The Story of the Knife’, Win a Tactical Assisted Opener from Trademark Knives