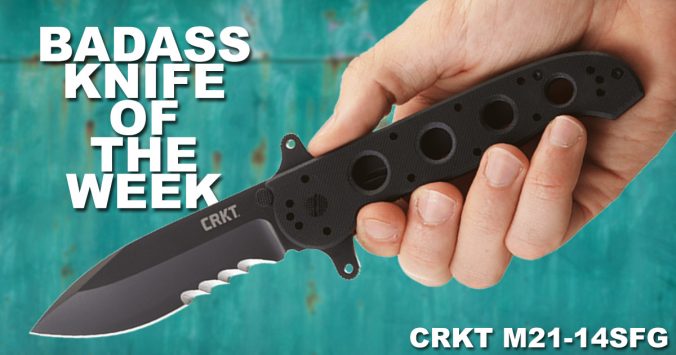 Kit Carson was a fantastic knife designer and an all-around good guy. Until his untimely death in 2014, the Cutlery Hall of Fame Inductee mentored some of the top knifemakers around, including Ken Onion.

Even though Carson is gone, his legacy still lives on in knives offered by CRKT, including our latest Badass Knife of the Week.

The M21-14SFG Special Forces is a bigger and stronger version of the highly renowned M16 knife family. This version has a long 3.99-inch black titanium nitride-coated blade made of 8Cr14MoV stainless steel.

The drop point blade has a piercing point and a partially serrated edge. Veff serrations are easier to sharpen than smaller ones. It also comes in standard triple point serrations and aluminum handles.

Using the mechanism that Carson helped popularize, the M21 springs to life with a flipper tab. When engaged, the flipper tab and guard create a dual-hilt blade guard that prevents the hand from accidentally slipping onto the blade.

A liner lock keeps the blade in place while the automated liner safety adds an extra layer of security by setting a pin between the liner and the frame.

A four-position pocket clip attaches to the G-10 handle scales that provide enough texture in even the grungiest environments.

For more info on this Badass Knife of the Week, see the product page for the CRKT M21-14SFG.