When buying a knife, there are hundreds of features, options and styles to choose from. Specifically, if you’re getting a folding knife, there’s the issue of selecting the type of locking system fits your needs and preferences best. Locking systems are essential for folding knives because they prevent the knife from closing on your hand during use. Instead of having to frantically search around the web to learn about all the different types, here’s a comprehensive list of the locking systems used in most folding knives. 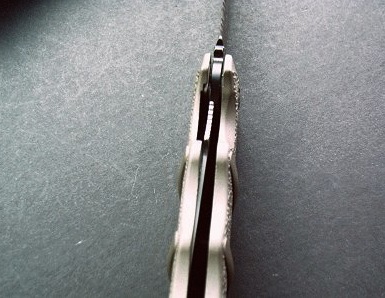 The liner lock, originally known as a Walker Lock after its inventor Michael Walker, is one of the most popular types of locking systems. When the knife blade is opened, a vertical metal lockbar is angled from the side of the interior toward the center where it butts against the tang of the blade. The pressure of the lockbar, also called a leaf spring, prevents the blade from moving. To fold the blade back into the knife, the lockbar has to be moved away from the tang to its original position. 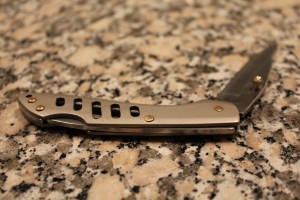 A lockback is sometimes called a spine lock because it has a metal spin that spans the entire back of the knife handle. Within the handle, the top of the spine and the tang of the blade resembles a hook. When the blade is opened, it pushes the spine out until the notch on the spine and blade are hooked into place. The two notches exert pressure on one another to keep the blade opened securely. Replacing the blade into the handle of a lockback knife requires pressing on the bottom of the spine until the two notches clear one another. 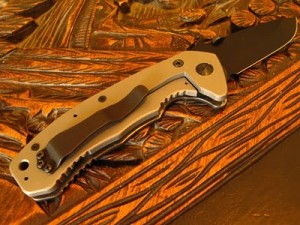 The frame lock is a similar concept to the liner lock, but instead of a separate metal liner within the interior of the handle, the knife’s frame is the actual lock. The frame, which is created similar to the lockbar, positions itself beneath the tang of the blade when it’s opened, so it can’t fold. Closing the blade requires the frame to be pushed back to its original position.

The main component of the lever lock is a pin that prevents the blade from closing. When the blade is opened completely, the pin from the handle fits snugly into a hole in the tang of blade. Once a lever attached to the knife is pushed down, it lifts the pin out of the tang of the blade, so it can close. Likewise, the pin holds the blade closed, so you also have to press the lever down in order to engage it.

A clasp locking system uses a piece of strong metal at the top rear of the handle. When the knife is opened, a post inserts itself into that piece of metal similar to a plunge lock. To disengaged the knife, you push up on a clasp so it lifts the piece of metal until the post clears its hole. Sometimes the clasp is a simple metal ring that you pull.

The mid lock is essentially the same thing as a lockback locking system except the release for the lock is located in the middle of the handle rather than the bottom. If you look at the spine of one of these knives, you’ll notice it doesn’t extend all the way to the bottom of the handle. The reason it’s in the middle is because the shorter spine can withstand more pressure.

Sometimes known as a collar lock, the ring lock requires you to twist a ring at the top of the knife’s handle to open and close it. This type is found mostly on Opinel knives. You essentially twist the ring until the blade aligns with the vertical slot, so it can open it. Then to lock it in place, you twist the vertical slot away from the blade.

Although it doesn’t necessarily lock the blade in place, the slip joint uses pressure from a spring to hold the blade up. It will close when you apply a specific amount of pressure, which is why the slip joint is seen mostly on light duty pocket knives. 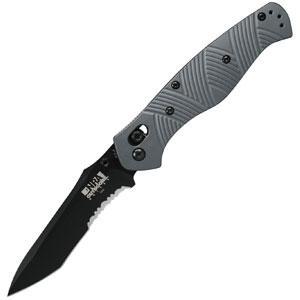 Benchmade Knives designed what they call the AXIS locking system. In this system, there is a small bar that spans the width of the handle. When the blade is opened, the bar is pushed forward within its slot until it locks into place when the blade is fully extended. The bar rests on top of the tang of the blade, so it can’t close.

This lock is only found in SOG Specialty Knives and is remarkably similar to the AXIS lock. However, instead of a bar that moves in a vertical motion, the arc lock has a device that moves in an arc. Overall, the bar and arc device both function identically and block the tang of the blade from closing when engaged.

The Tri-Ad locking system is exclusively licensed to Cold Steel. It resembles the lockback in that the tang of the blade fits into a notch along the spine, but there is a patented “stop pin” that redistributes the pressure from the lock to the spine for additional strength.

Woman pulls out sword to settle argument at Pizza Hut