Your Old Knives Can Fetch Big Money at Road Shows 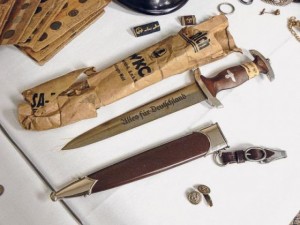 With several collectible road shows popping up around the nation in the few next weeks, you could have a serious opportunity to make money by selling old knives or family daggers hidden away in your attic.

These road shows, like the Treasure Hunters Road Show taking place right now, seek out old knives and swords passed down from generations.

Some of the most lucrative type of collectible knives are those from World War I or World War II.

A great example of this is a recently sold dagger used by Germans in WWII. Although the dagger, called an SA Dagger, was not necessarily rare, its mint condition shot up the value three or four times the regular price.

The dagger, sold to the American Rare Collectibles Association, was passed down to the former owner from his father who was a U.S. soldier. During WWII, his father helped capture German supplies, which included new daggers.

Daggers were very popular in WWII because they were considered part of the regalia of elite German soldiers and served some practical use.

Many knives and daggers from WWI and WWII were taken home by soldiers as souvenirs or reminders of their battles, and some varieties still fetch hefty amounts at these collectibles road shows.

If your father or grandfather was a soldier during these wars, there’s a good chance one of these knives is tucked away in a box somewhere.

Even if you’re not interested in selling your family heirlooms, it’s still a great idea to take it to one of these shows to get it valued. You never know what treasures are lying around your house.