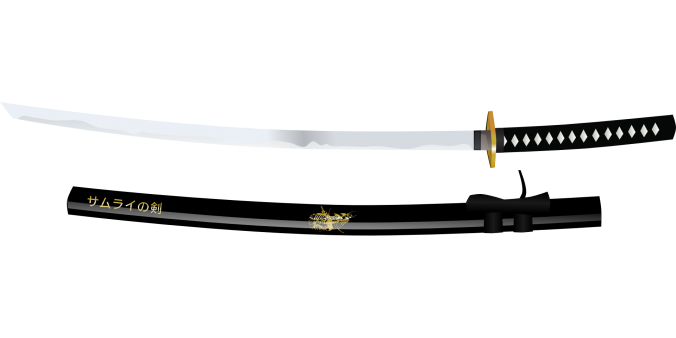 The Complete History of the Katana: The Traditional Samurai Sword

Have you ever wondered about the history of the Katana? Have you wanted to know where it came from and who wielded it first?

If so, you’re in the right place!

We have compiled a complete history of the infamous Katana blade so you can know everything about this legendary sword.

To find out the complete history of the Katana, keep reading below and learn what you came here to learn.

What is the Katana Sword and Who Used it?

The Katana is a Japenese sword that is characterized by its curved, single-edged blade. It has a circular or squared guard and a long grip so it can be held by two hands.

This sword is usually known as a samurai sword since it was the blade samurais preferred to wield. With this said, it is easily the world’s most popular and most recognized sword.

The word Katana refers to the family of swords to which it belongs. This sword family is known to have a blade length of more than 2 shaku or Japenese feet which is about 60 cm.

The Kamakura Period – When the Katana is First Mentioned

The first mentioning of the Katana was during Japan’s Kamakura Period which was between 1185 to 1333. During this time the word was used to describe a long sword that had similar characteristics to the Tachi but without the nuances.

The Katana differed from the Tachi because it had a longer and more curved blade. The biggest positive to the Katana, when compared to the Tachi, was that it had more strength and power than its sister.

When the Mongols Invade – the Need For a New Blade

Most historians believe that Japanese swordsmiths created the Katana due to providing a better need for weapons to use against the invaders. During the span of 1274 to 1281 the armies led by Kublai Khan wanted to conquer Japan, the samurais noticed that their Tachi blades would chip when they came in contact with the Mongol armor.

Due to this, the Japanese swordsmiths worked to engineer a blade that was sturdier than the Tachi. This led to the creation of the Katana.

The Birth of a Blade to Protect a Country

Through the Muromachi period (which spaned 1337 to 1573) the swordsmiths worked to perfect the Katana. They did so by using a different heat treatment to help create a flexible spine and a strong edge.

This heat would also help to create higher carbon iron. After many trials, the end result would be a blade-like no other, and one that would rise above all others.

In the year 1400, the Japanese swordsmiths began adding a name to the blade, the name of “Katana.” It’s believed that this name was given in response to the change within Samuari culture.

Until this moment in time samurai warriors had worn their blades with the cutting edge facing down towards the ground. The Katana was the first sword worn with the blade facing up.

The Birth of the Modern Katana After Samauris Were Abolished

During the Meiji period from 1868 to 1912, the samurai class was dissolved. This means that no one held the samurai title anymore and the benefits and privileges granted to them were taken away, this even included the benefit of carrying swords in the public eye.

At this point in time, the only people allowed to carry swords in public were former samurai lords, the military, and the police. This limitation made life hard for the swordsmiths and they had to resort to creating items such as farming equipment to make a living.

This slump wasn’t long-lived. During the Meiji period war between Japan and Russia invoked the production of swords again. Then during World War II, all officers were required to wear a sword, which meant business was booming yet again for the swordsmiths.

Since swords had to be crafted fast to meed the military demand, some corners were cut. The Katanas produced were not made out of Japanese steel, power hammers were used, quenching in oil instead of water.

This meant that the swords weren’t handmade and the quality was lower than that of the Katanas made in previous time periods. These cheaper and faster methods brought the birth of the modern Katana, which most Katanas made today are made with these steps unless otherwise stated.

Fast forward to today and the Katana is still popular. Even though the production of the sword has slowed down, especially after World War II. After the war Japan agreed to stop the production of weapons, this included swords which led to fewer Katanas.

There is a Katana revival happening in today’s world. Now there are companies around the world, and even in Japan, that is producing the sword to keep up with the current demand.

Now You Know the History of the Katana Sword

If you’re a Katana enthusiast or if you’re someone who is interested in the vast history of the blade you now have completed the crash course. We informed you of the Katana history through the different periods of Japan up to today.

You know that samurais were the first to wield the legendary Katana and why the Katana blade had to be created to help better defend themselves against the Mongols.

You’re even aware of the history of the Katana after samurais’ lost their privileges and benefits. The slump in Katana production wasn’t long-lived and went back up during World War II. For more information on blades be sure to check out the rest of our website here.

The 7 Best Automatic Knives Available on the Market in 2020