It’s another one of those what-is-this-world-coming-to stories.

An eighth grader at a middle school in Pennsylvania was suspended for three days and may face a 10-day suspension after accidentally bringing a pocket knife to school. The story wouldn’t be so shocking thanks to school policies these days, but the boy had actually done the right thing and immediately turned his knife into the principal when he realized it was in his pocket.

Doing the right thing did not matter. He was immediately suspended.

“The safety and well-being of our students and staff is paramount,” Superintendent Keith Hartbauer said to Pittsburg’s Action News 4. “We will follow our district’s policy, procedures, and solicitor’s recommendation regarding this discipline incident.”

Apparently, the 13-year-old Thomas Ross Jr. had used the pocket knife the night before to open a cardboard box containing a futon. He stuck it in his back pocket but forgot to take it out. When he wore the same shorts to school the next day, the knife was still in his pocket.

“I was scared that if I were to get it caught with it on me, it would have been worse than me turning it in,” Ross Jr. said. 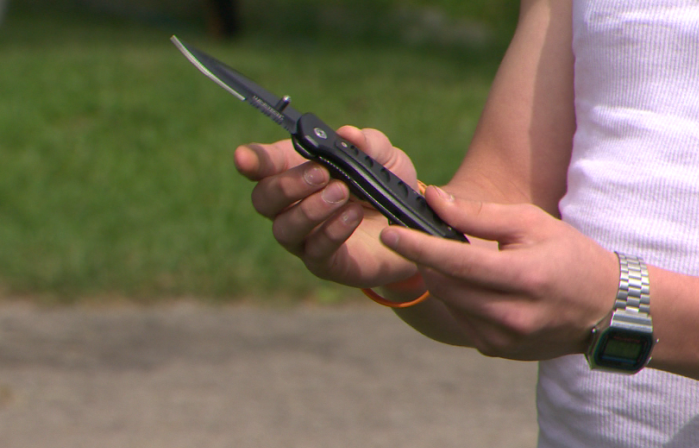 A similar knife to the one he took to school – WTAE

So he went to the office and told the principal, who took the knife. The boy was then surprised when he was sent home with a three-day suspension.

Needless to say, his father was not pleased.

“There’s a first-degree murder and a third-degree murder. There’s no such thing as zero tolerance in the world,” Thomas Ross Sr. said. “Why is there zero tolerance on a child bringing a weapon by accident to school and then doing the right thing and turning it in?”

The younger Ross is apparently a good student who had never been in trouble at school before.

“When he realized he had it, he turned it in,” Ross Sr. said. “He’s a typical kid. Don’t discipline a child for doing the right thing.”

People have strong opinions about the zero tolerance policy (including over at Fark). While the school does have a policy and turning yourself in does not absolve you from guilt, the suspension does punish the boy for doing the right thing. If this were to happen again to someone else, they know it would just be better to keep the knife in their pocket.

Whether the rule of no pocket knives at school is even relevant (considering just a few decades ago students were taking knives to school without fanfare) is valid, but let’s just focus on the implementation of the rule.

What do you think? Was the school justified in suspending the boy or should the principal have been lenient?