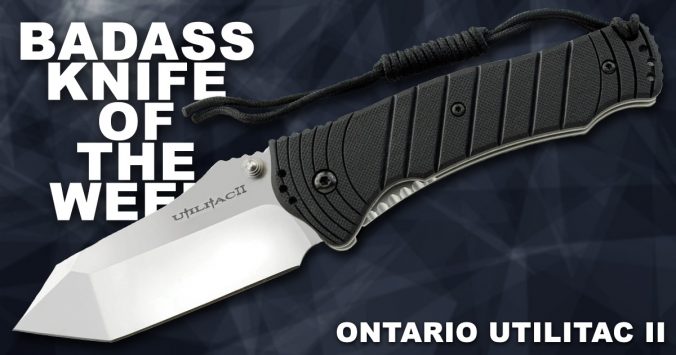 If you ask anyone what the best budget knife for the common man is, they will almost always point to the Ontario Knife Company RAT models. But our latest Badass Knife of the Week shows that Ontario has yet another contender for best budget folder.

The Ontario Utilitac II is an impressive folder that excels at its purpose as an inexpensive work knife you don’t have to think twice about using.

Designed by Joe Pardue — son of Mel Pardue of Griptilian fame and father of knife designer Robert Carter — the Utilitac II represents form and function over everything else.

This version of the Utilitac (JPT-4S Tanto SP) features a robust 3.5-inch satin finished Tanto blade made from AUS-8A stainless steel, an alloy that’s durable and easy to sharpen. It engages simply and reliably with a thumb stud on either side and locks into place with a no-nonsense liner lock.

The black handle is made from Zytel. Lines cut into the handle help keep the shapely knife firmly in the hand.

With thoughtful extras like a four-position pocket clip, an out-of-the-way lanyard hole, scallops on the liner lock for easy access, and jimping, it’s hard to find much wrong with this knife at such a low price point.

For more info on this Badass Knife of the Week, see the product page for the Ontario Utilitac II.

KA-BAR USN Mark I – Badass Knife of the Week