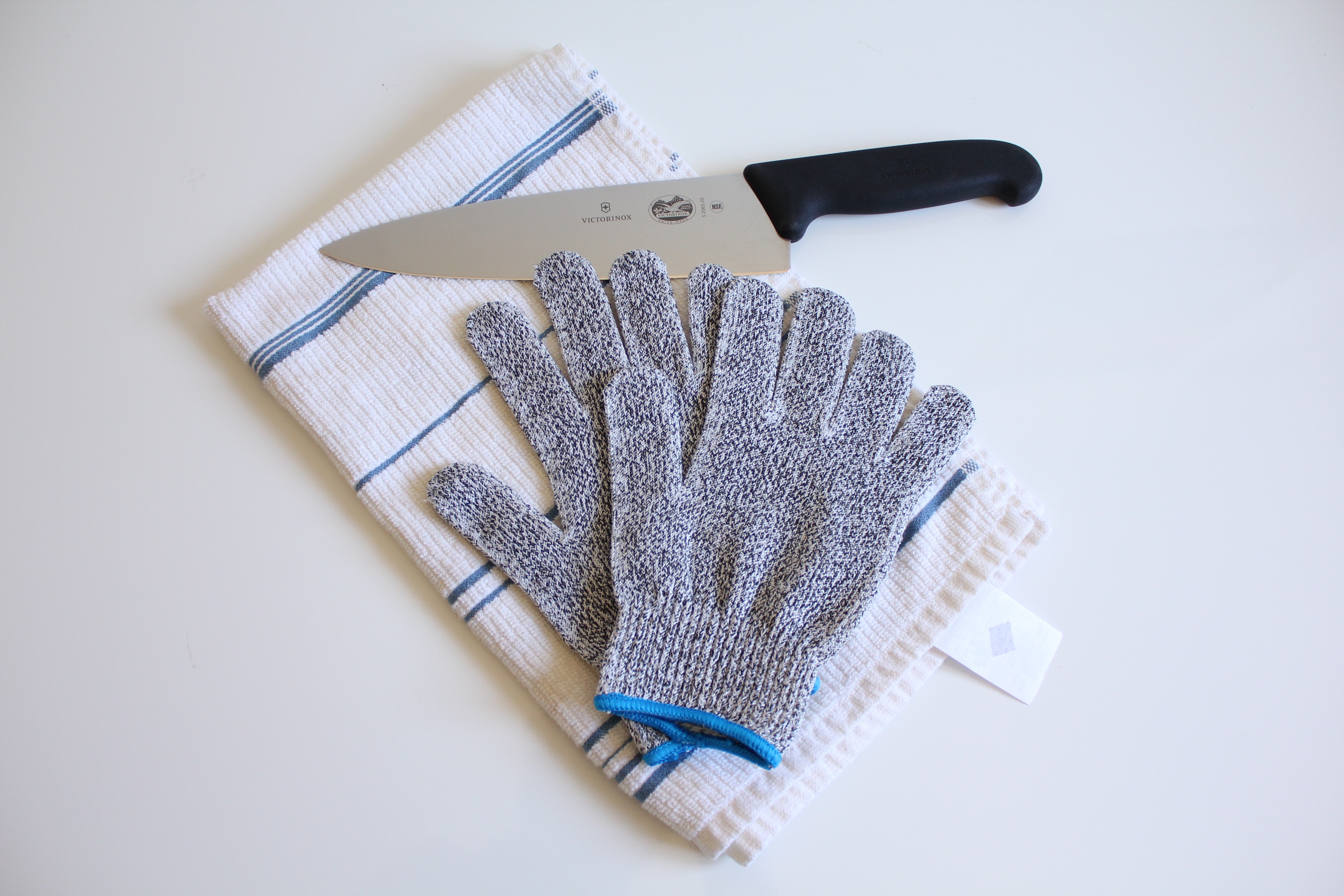 As someone who handles razor-sharp knives on a day-to-day basis, I’ve been cut on the rare occasion (nothing seriously mind you), so when the founder of NoCry Cut Resistant Gloves reached out for a review, I was intrigued.

They sent me three pairs to try out and here’s what I thought.

If you’re a casual knife user, you might be wondering why anyone would need cut-resistant gloves. I thought the same until I met my wife. She’s a very competent and dexterous person, but when it comes to knives and food preparation, she’s a mess.

It started when she cut herself with a peeler a few times and grew worse after she sliced her finger chopping a sweet potato. Since then, she refuses to peel anything for fear of cutting herself. Her confidence is shot.

The NoCry Cut Resistant Gloves are the perfect solution for people like her. These gloves allow her to slice, dice, and peel without the fear of mixing blood and gore in with her famous homemade chili. 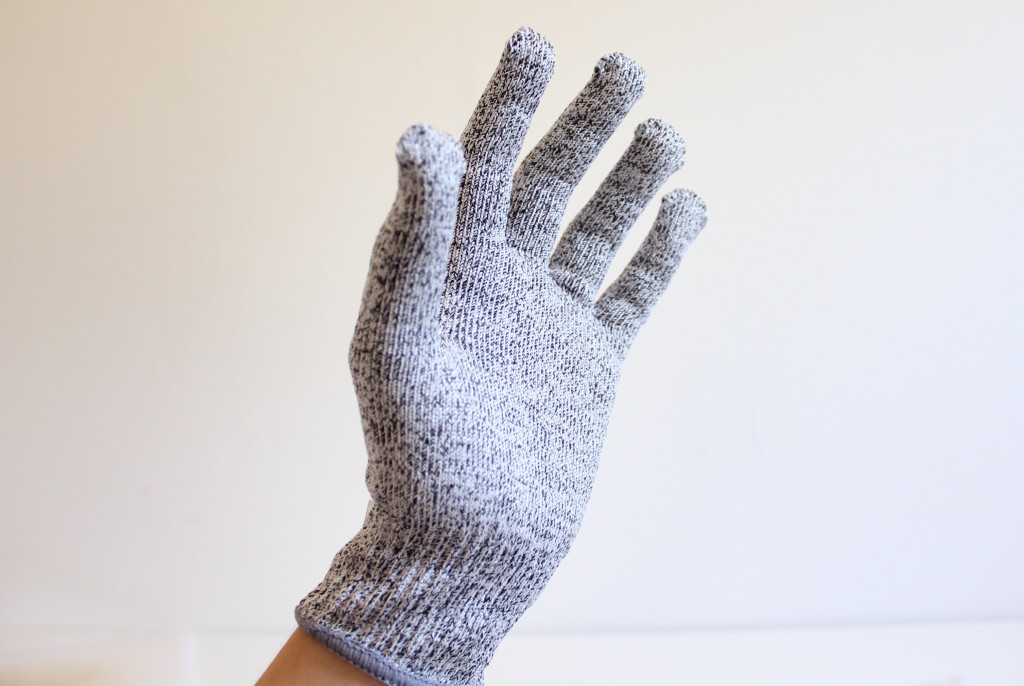 Aside from the typical use of holding items while cutting to increase confidence, NoCry Gloves also assist in a few other tasks. The folks at NoCry let me know that a large majority (around 80%) of people who bought the gloves use them in the kitchen. Ideal kitchen use for cut-resistant gloves is peeling, dicing, shucking oysters, grating cheese, or trying to cut a whole watermelon in 30 seconds or less.

Although I don’t have a mandoline slicer, many of the reviews on Amazon say that the gloves can also save a trip to the hospital.

The other 20% of users for these gloves are hunters and fishers. When you’re dealing with sharp knives in wet and slippery environments (filleting a carp or skinning a white-tailed deer), your hands become prone to slippage.

Initial Reaction to the NoCry Gloves

Enough background—let’s dive right in. The gloves arrived in a nondescript, resealable zippered plastic bag. Packed with the gloves were a proof-of-purchase slip and a print-out of some general instructions/care tips. You can tell NoCry is a fairly small operation from the packaging, and that’s not a bad thing.

The gloves are exceptionally lightweight—about .85 ounces per glove—and surprisingly thin for something that’s cut-resistant. The benefit is that it still allows for complete dexterity and movement, which is important when you’re quickly working in the kitchen or trying to do smaller cuts on a hide in the field.

Aside from the elasticity of the glove’s material, it also provides a nice grip. This makes things a lot easier and safer, whether you’re in the kitchen or in the field.

Even though the gloves come in pairs, you’ll usually only need to have one pair on at a time. Both sides are ambidextrous, so you could actually just get by with one glove. That’s another nice feature.

The gloves come in three sizes: small, medium, and large.

To figure out which size is right for you, NoCry has a sizing chart on their site. You measure the diameter of your palm and match that size to the recommendations.

Here are the three sizes next to each other, along with a ruler for comparison. 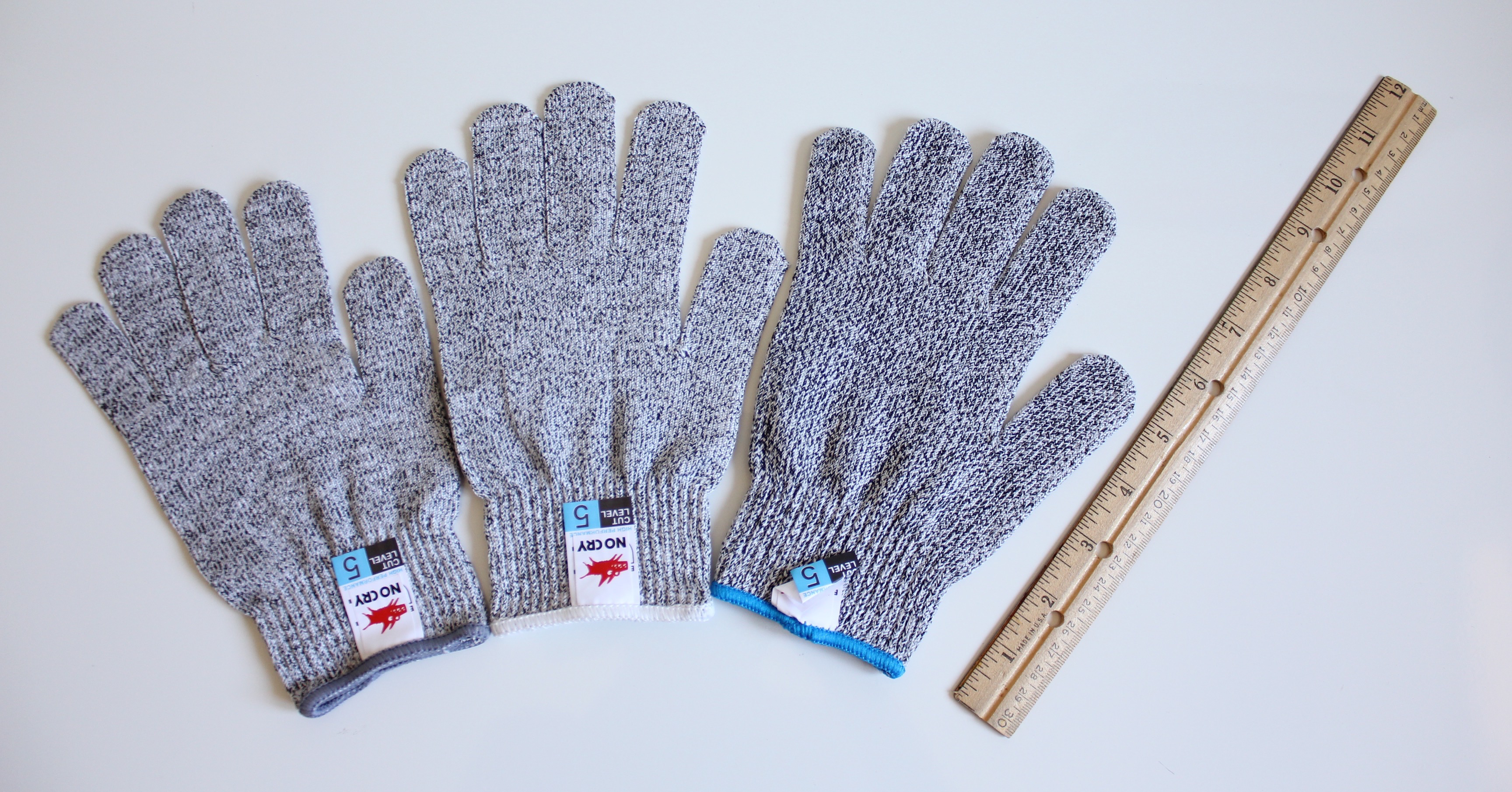 Since there’s no actual sizing on the gloves themselves, they’re discernible from the color of the stitching around the wrist. That’s helpful if you have two pairs in different sizes in your kitchen. You have to remember which color is yours though.

In theory, this all works fine, but when I measured my own hand, it was 3.30 inches. Had NoCry not sent me the three sizes, I would have been torn between the small and medium. My hand actually fits pretty well in all three sizes, though the medium does seem to fit best.

Taking care of the NoCry Gloves is pretty straightforward. The gloves are machine washable, but it’s recommended that they’re allowed to drip dry after using mild detergent at temperatures below 104° F. According to NoCry, the gloves can be washed up to 30 times before they suffer any loss of elasticity. Even after that, I can’t imagine the gloves would suffer such a major loss in performance.

A potential issue is some unthreading to spots that may have torn. Any tears will result in spots that begin to unravel and eventually compromise the safety of the gloves. Since these gloves are relatively inexpensive, it would be worth it to get another pair instead of continuing to use an unraveling glove.

Before we get to the testing, I wanted to clarify the difference between cut-resistant and cut-proof. The NoCry Gloves are the number one seller on Amazon in cut-resistant gloves with more than 1,700 reviews and an average of five stars. Curious to see why some people gave the gloves a lower rating, I scrolled through some of the one-star reviews. 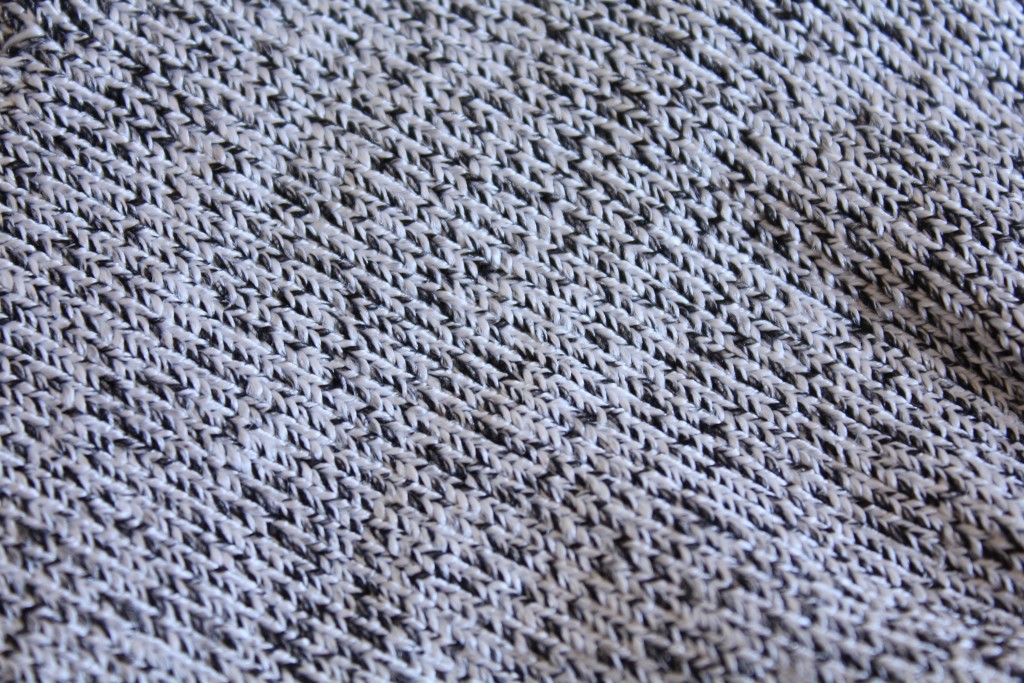 The main complaint was that these gloves are not cut-proof. Well, duh. There’s no such thing as a cut-proof glove that’s designed for cooking and general use. This is a cut-resistant glove that’s meant to prevent severe injury. Can you slice through these gloves? Absolutely, and NoCry doesn’t claim otherwise. However, that doesn’t mean the gloves have failed. If a knife eventually makes it through the glove, it’ll do significantly less damage than if the glove wasn’t there.

NoCry Gloves are made with food-safe ultra high molecular weight polyethylene, glass fiber, and Spandex. The gloves achieved an EN388 Level 5 cut-protection rating, which is a European standard used to assess the performance of a fabric. To test, a circular, free-rotating blade moves back and forth over a surface with a standard pressure of about 500 grams.

Needless to say, these gloves are designed to stand a fair amount of pressure. (The instructions and common sense clearly indicate this will not protect you from power tools so don’t even try it!)

Bearing what I just wrote in mind, I decided to do a few tests to see what the gloves could withstand. 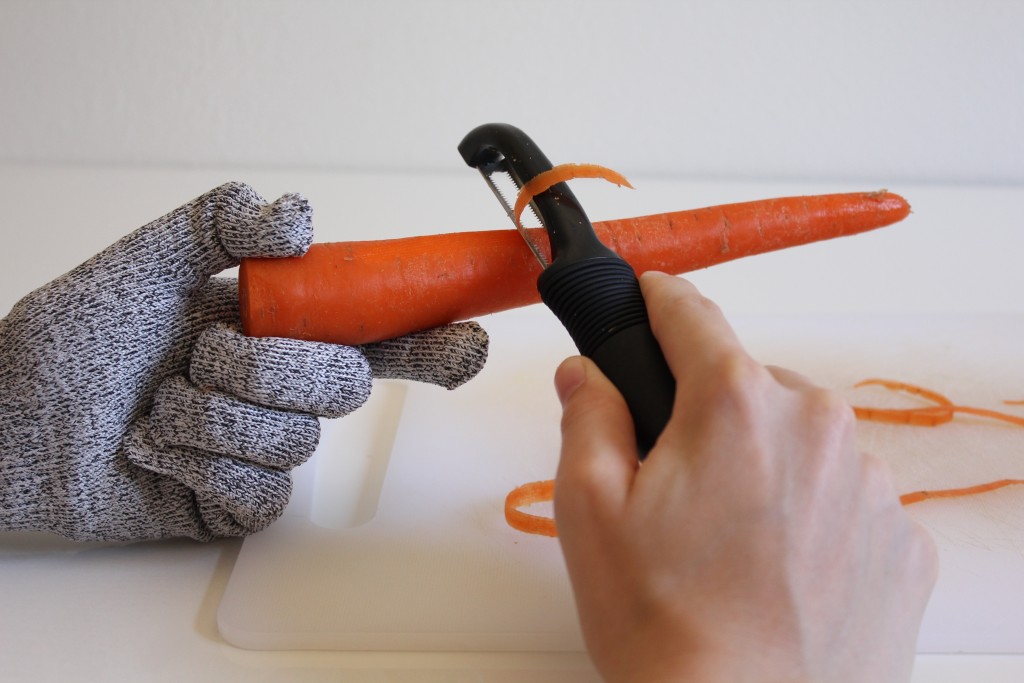 The first challenge I threw at the gloves was a serrated peeler. After making my wife wear the glove to peel a carrot, I stuck a piece inside and dragged the peeler across the glove a few times. The peeler caught on the glove and pulled, but other than that, the glove came out unscathed. Here’s what it looked like. 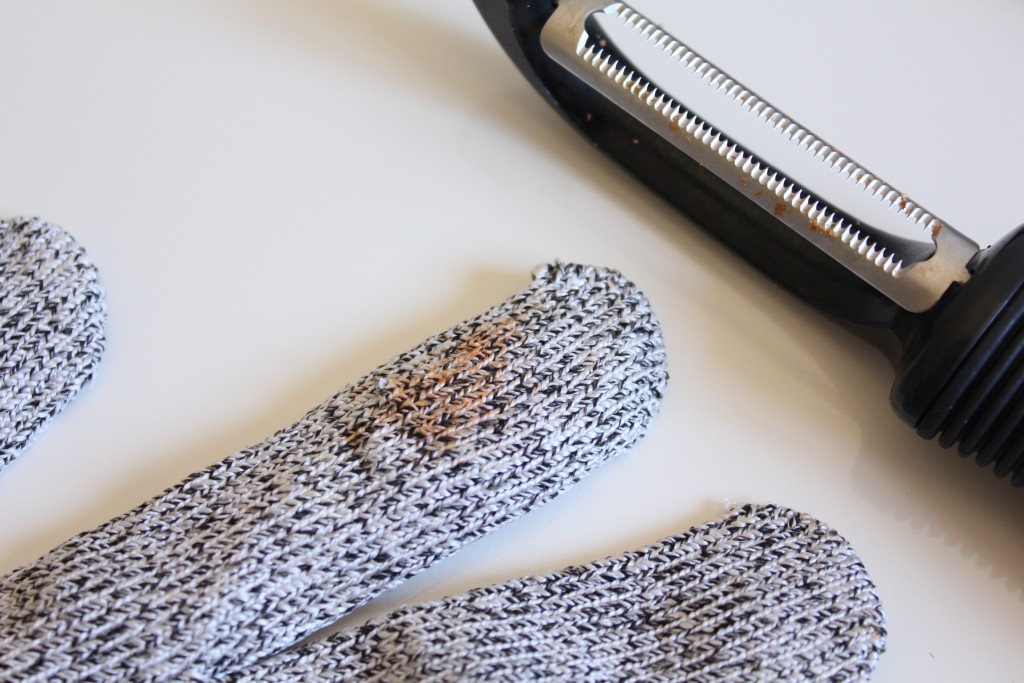 I’m very satisfied with its ability to withstand a wayward peeler. 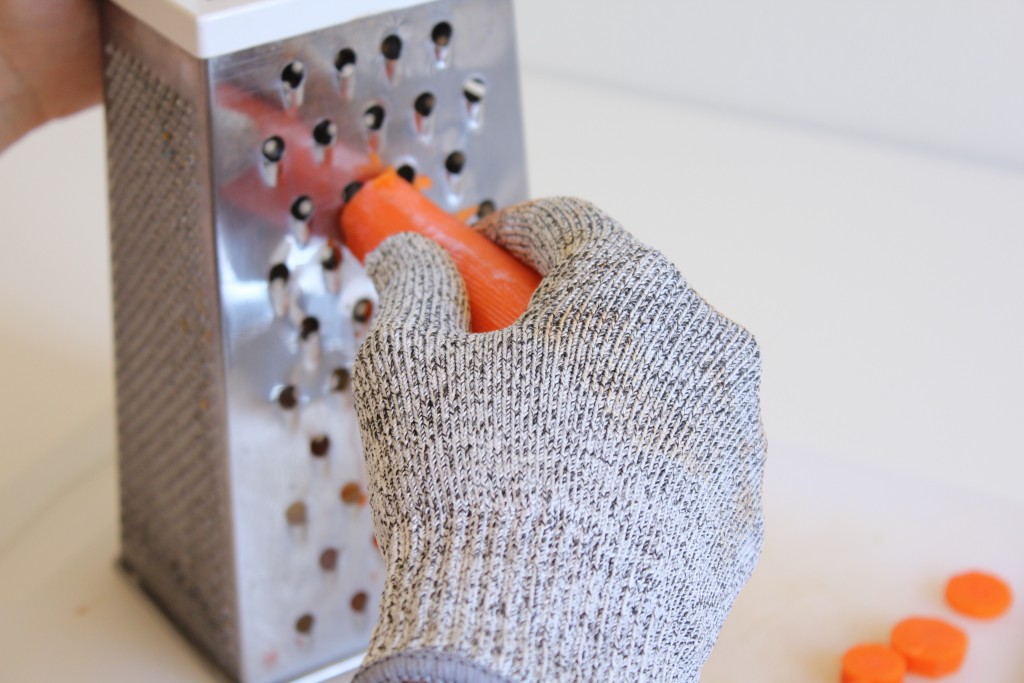 Next up is the grater. I started off with these two because they’re the most important in my opinion. Nothing is worse, more damaging, and more painful than grating your fingers or taking a peeler to your thumb. With another carrot inside, I pulled the glove against the grater a few times. 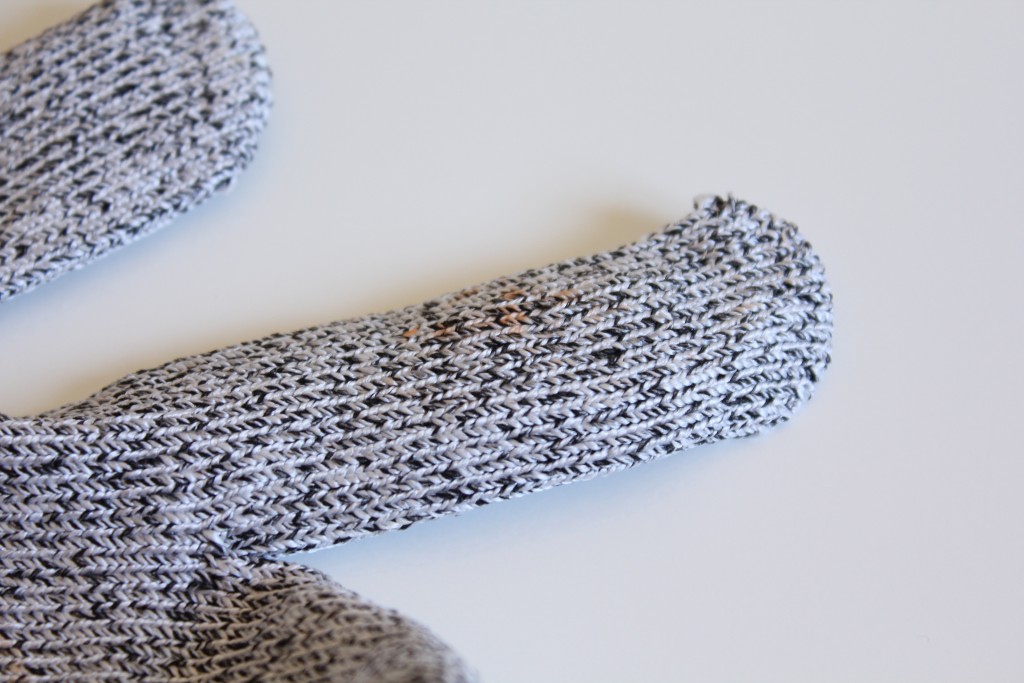 As you can see, there’s a slight mark, but no puncture. Again, the NoCry Gloves held up nicely against the grater. 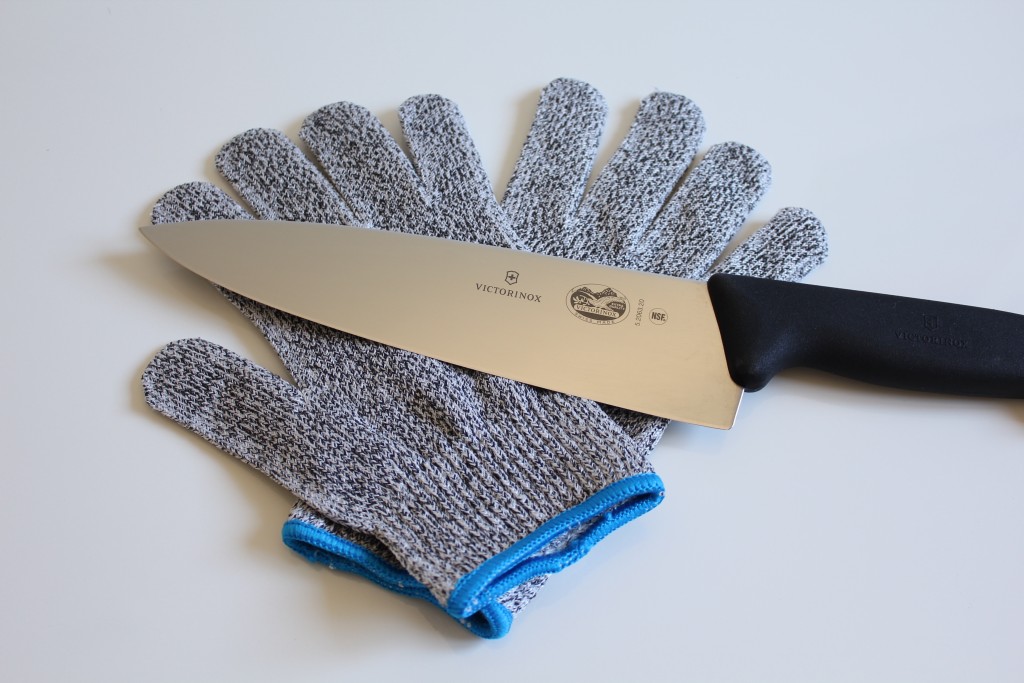 Next, I matched up the gloves against the Victorinox Fibrox 8-inch Chef’s Knife. The blade was freshly sharpened and could easily slice through a piece of paper. Since the knife was the major test, I decided to do a few of them.

The very first test was a push cut (a piece of carrot was inside, not my finger). The glove was completely unaffected, so that was a point for the gloves. I moved onto slice cuts.

The first slice was like the ones you’ve seen in most of the other review videos for cut-resistant gloves. Very light and little to no pressure. Unsurprisingly, the gloves withstood the slices with ease.

I upped the ante a little by applying some more pressure—as much as you might expect from a slip. There was a slight tear in the glove, but the carrot underneath showed no sign of damage whatsoever. I repeated this test, and the results were the same. There was a tear, but the carrot inside remained intact. I’m confident that had my finger been in the glove, it would be fine. Although the glove is now damaged, it’s another victory for the gloves. 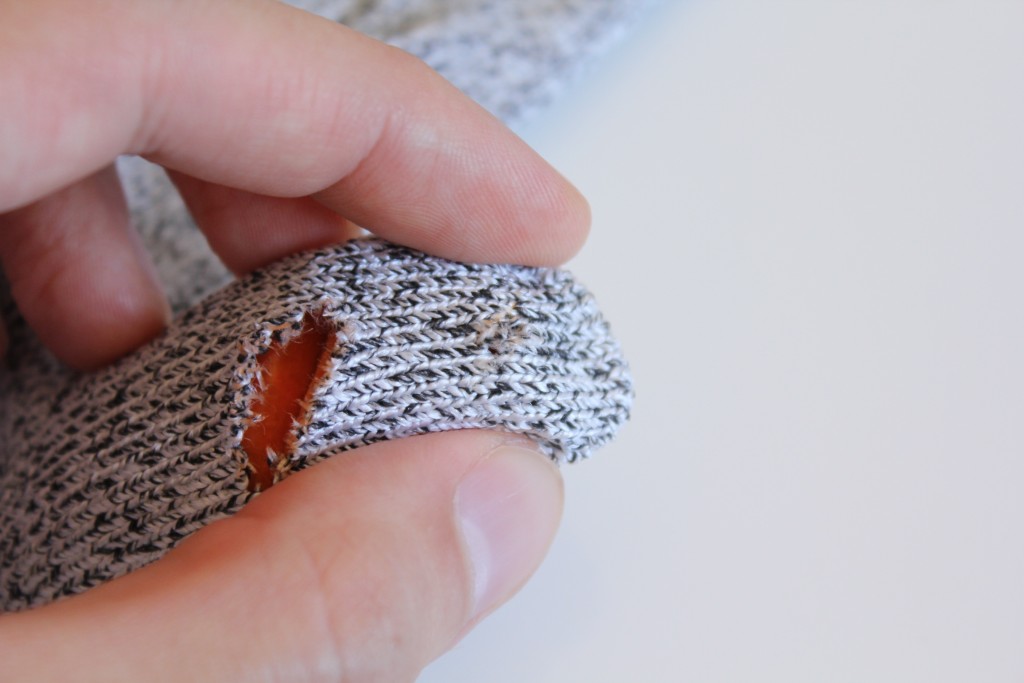 Just because the glove couldn’t withstand that direct and firm pressure from a razor-sharp chef’s knife doesn’t mean the glove is a failure though. You have to take into consideration what the carrot inside would look like had it not been encased inside the gloves. The carrot would have absolutely been cut in half instead of merely sliced through.

While these gloves may not be for everyone, those who work in the kitchen or skin game out in the field will find these gloves essential. Since there’s a marked improvement in grip and no loss in dexterity, wearing these gloves is a low-risk, high-reward proposition. And if you’re unsatisfied with the gloves for any reason, NoCry will give you a full refund.

Although the gloves can’t withstand direct punctures or cuts with an unreasonable amount of pressure (no cut-resistant glove can), I’m very confident in their ability to stop accidental slices, grates, peels, and more.

Overall, NoCry has done a great job with these cut-resistant gloves. You can pick up a pair of gloves here or at Knife Depot here.

The folks over at NoCry Cut-Resistant Gloves have generously offered to give away five pairs of gloves. To enter, you must subscribe to their newsletter, as well as ours.