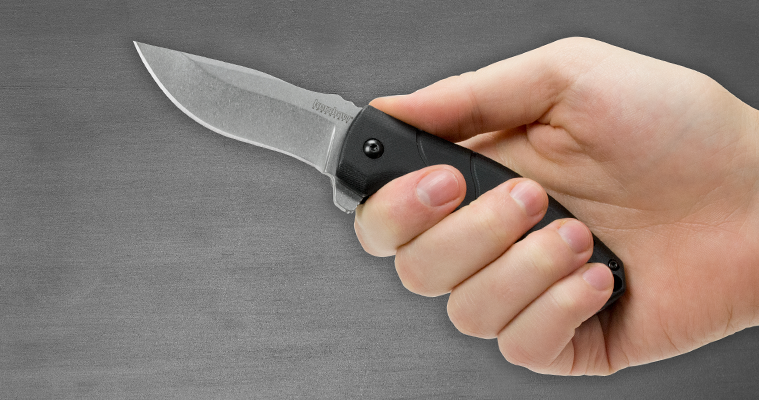 Since Kershaw Knives was first created by Pete Kershaw and his wife back in April 1974, the company has been putting out some of the finest knives around.

The early 2016 batch of new knives proves that Kershaw still knows how to make a great knife with some cool features.

There are currently 27 new knife models and a couple of new accessories, like the Jens Carabiner. We’re only focusing on the knives in this post.

The Barge is a manual folder with a 2.6-inch 8Cr13MoV stonewash-finished blade. What makes the Barge so unique is the presence of a prybar at the butt of the handle. It extends from the backspacer of the knife. Most people pry as often as they cut, so this is a surprisingly useful tool, especially since prying with a blade is one of the worst things you can do with a knife.

The Cathode is billed as a knife that’s not fancy but functional. It has a 2.25-inch tanto blade, a flipper with SpeedSafe assisted opening, and a patterned stainless steel handle. It uses a frame lock.

The Cinder is a small knife that can fit on your keychain. It has a 1.4-inch blade with a liner lock and a bottle opener on the butt. It has some nice contour on the glass-filled nylon handle, which makes holding the small knife easy.

Ernest Emerson and Kershaw’s relationship continues with the CQC-9K. The original CQC-9 had a hawkbill blade design, but the CQC-9K is a large folder with a drop-point blade. The blade measures 3.6 inches and is made from black-oxide-coated 8Cr13MoV stainless steel.

It has Emerson’s patented Wave feature, but it becomes hidden when the knife is engaged. The front of the handle is G-10 and the back has black-oxide coating.

The Decoy is a utility knife with a 2.5-inch Wharncliffe blade. It uses a long, manual flipper and a liner lock. What makes this knife so special is that a pair of pincers is built right into the handle. Pretty convenient if you ask me.

Entropy is the gradual descent into chaos and disorder. The Kershaw Entropy is anything but disorderly. The slim folder has a 3.25-inch SpeedSafe assisted opening blade made from 8Cr13MoV stainless steel. Designed in collaboration with Todd Rexford, the knife has a strong, piercing tip. Great knife, though this song definitely pops into my head whenever I see it.

The name Fatback is sort of a misnomer. The Fatback is actually a fairly slim knife with a 3.5-inch assisted opening blade made from 8Cr13MoV stainless steel. Kershaw says the knife is called Fatback because it’s very tasty, like bacon. I wouldn’t go that far, but the black knife is definitely sleek and sexy.

Rick Hinderer has had a pretty fruitful partnership with Kershaw, and the Ferrite is another good example of the kinds of things they can do together. The 3.3-inch blade has a groove in the spine for choking up on the knife while doing finer tasks. Again, the blade steel is 8Cr13MoV but with titanium carbo-nitride coating. The flipper uses the SpeedSafe assisted opening mechanism.

The Grid is a dark and brooding knife with a strong tip and a small belly. The blade is 3.7 inches and uses SpeedSafe assisted opening with a flipper. The steel is either 8CrMoV or 4Cr14—Kershaw currently has both up at the moment in their description. The handle is made from steel and uses a frame lock to keep the blade engaged.

No, we’re not talking about that FOX show. The Kershaw Grinder is billed as a work knife because it has a versatile blade. It has a tanto-style tip with a slight recurve in the belly and heavy jimping on the spine. The steel is 420HC with a bead-blasted finish and a glass-filled nylon handle scales. As usual, the knife uses SpeedSafe assisted mechanism with a flipper.

So far the knives have been the typical sleek and thin Kershaws that we’ve come to know and love, but the Identity looks a little different. The handle has black and gray coloring with a texture that resembles a person’s fingerprints (hence the Identity name). The 3.5-inch blade is made from 8Cr13MoV stainless steel. Speedsafe. Flipper.

With the Induction, you can see that Kershaw is having some fun with the design. The cutting edge and the swedge are black-oxide coated but the flat portion of the blade is satin finished. The blade is 3.1 inches and the handle is made from anodized aluminum with glass-filled nylon texture inserts. There’s no flipper or SpeedSafe, but it does use the fantastic Hawk Lock.

The Intellect has somewhat of an imbalanced look when engaged. That mainly has to do with the exceptionally thin steel handle compared to the full 3-inch 8Cr13MoV blade. We’re not complaining though. The grip looks fantastic and it helps cut down on the weight. Smart choice indeed.

Kershaw continues its fantastic Launch series (Launch 1, Launch 2, and Launch 3)  with the Launch 4. This small auto features a blade that’s 1.9 inches with CPM154 steel. The Launch 4 opens with the push of a button and has some safety features to ensure the knife doesn’t accidentally open, including a button that’s level with the handle. That knife is lightweight at less than 2 ounces.

The Launch 5 is an automatic Emerson design. It has a 3.4-inch CPM154 stonewashed blade. It has the general look and feel of other Emerson knives with some of the same features as the Launch autos.

The Launch 6 is a slim auto with CPM154 blade steel on the long 3.75-inch blade. The contoured handles are made from durable anodized aluminum; the knife comes with a reversible pocket clip.

The Link is not a new knife, but it is now available in a serrated version.

Again, the gray aluminum blackwash Link is already available, but now it comes in a serrated version.

Kershaw seems to be focusing on adding features to its knives, like a prybar in the Barge and pincers in the Decoy. The Payload stores a 5-bit screwdriver set in the handle:  a #1 slotted, a #1 Phillips, a #2 slotted, #2 Phillips, and a T-6. Along with the bit set is a 3.3-inch SpeedSafe assisted opening blade made from 8Cr13MoV. It uses thumbstuds to engage.

The Pico is another knife that screams Kershaw. Designed by custom knifemaker Les George, the Pico has a cohesive look. The 2.9-inch blade is made from 8Cr13MoV and has a stonewashed and satin finish. The steel handle has a bead-blasted finish. It uses a flipper, SpeedSafe, frame lock, and deep carry clip.

The Portal is a relatively cheap knife that you could put through the ringer. There are machined grooves on the 3.3-inch 4Cr14 steel blade. There is also some interesting texture in the glass-filled nylon handle. It has a flipper and SpeedSafe mechanism.

Marketed as a great EDC, the Rove has a versatile drop point blade that’s 3.3 inches and made of 8Cr13MoV steel. Some of the features include a flipper, SpeedSafe opening, liner lock, and reversible clip.

Like the Showtime Lakers featuring Magic Johnson and Kareem Abdul-Jabbar, the Kershaw Showtime is a winner that does so with flashiness. The blade has a similar look as the Induction: the edge and swedge are coated with black oxide while the flat portion is satin polished. The elegant flipper has a 3-inch blade and a flipper to accompany the SpeedSafe mechanism. This is a great folder to take to black-tie events.

The Spoke is a compact knife with a 2-inch blade. It has a textured steel handle with an oversized flipper and features the SpeedSafe mechanism.

According to Kershaw, a spline is a numeric function that can define a curve. I’m guessing it has something to do with the curvaceous spine on the Spline. This Les George-designed knife has a 2.9-inch 8Cr13MoV steel blade and a steel handle. Both have a black-oxide BlackWash finish. As you might guess, it has a flipper and SpeedSafe mechanism. The ergonomics on the Spline look well conceived.

Les George used his background in the US Marines to design the Valmara. This heavy duty folder has a 3.1-inch 8Cr13MoV, stonewash-finished blade with a flipper and SpeedSafe mechanism. The blade has a nice recurve with a strong point for a piercing. The handle has wavy patterns to add contour, and the flipper helps act as a choil.

The Westin is another Les George knife with a slim design and patterned handle. The Westin is actually inspired by Michael Westin, a character on the USA Network’s Burn Notice. Having never seen the show, what traits George gleaned from the character, but the knife has an interesting blade design with a drop point and asymmetrical blade grind. It has a SpeedSafe mechanism with flipper, frame lock, 8Cr13MoV steel, and two-toned handle (glass-filled nylon front and stonewashed steel back).

Yes, I know I said we would only focus on the knives, but the Ration is a great little tool to have on a hike or even in the car. How many times have I been without a spoon and/or fork trying to eat something delicious? Too many to count. This tool easily clips onto a bag or briefcase.

Is a Knife Clipped to Your Pocket Considered Concealed Carry?