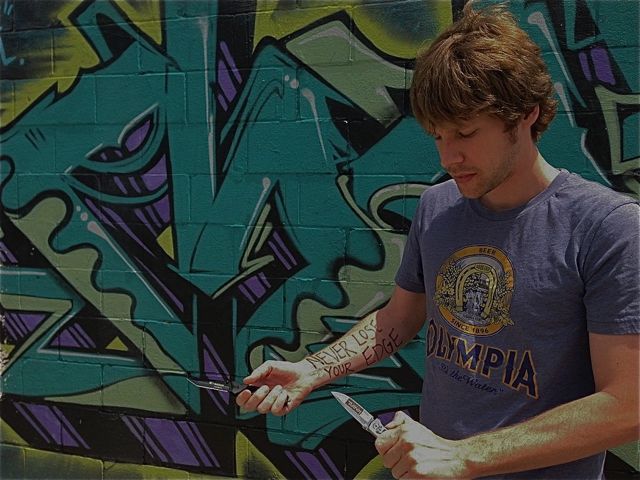 I’d like to take a second to reintroduce myself. For the last two years, I’ve been blogging for the Cutting Edge. In fact, I founded this blog in 2010. The initial name was actually the Happy Dagger. That’s a Bill Shakespeare reference, in case you’re not aware.

Anyway, I have a confession to make. The reason I started blogging for Knife Depot wasn’t because of my love for knives. It was because, like most people writing on the Internet, I was a copywriter.

In fact, I wasn’t just writing about knives then, but about all sorts of subjects like: birdfeeders, picnic baskets, temporary tattoos, seafood restaurants, wedding planning and even bankruptcy law in Arizona.

It wasn’t a bad gig — I could do it in my underwear — but some of these subjects just left me feeling a little thin.

I quickly noticed that most of my best writing was about knives, because they truly fascinated me. The guys at Knife Depot started sending me boxes of them, which was pretty badass, and I’d use them when I went camping with my friends.

You see, the thing about working as a writer is that you have to spend lots of time behind a computer typing when all sorts of kickass, beautiful stuff is going on outside in nature. It can be kind of a bummer.

The knife was my only link to the tangible world. It was a rugged product that reconnected me with nature in a way I was missing. Over time, I became intoxicated by the power of the blade.

And why wouldn’t I? It’s the world’s oldest tool, suffused with a deep religious, historical and cultural meaning. It was used by Roman craftsmen, Native-American hunters and frontiersman like Jim Bowie and Daniel Boone.

It turns out that over at they Knife Depot office they noticed my zeal for the knife, which is why a few weeks ago they invited me to central headquarters to discuss working full time for the site.

As you can expect, I was a little bit nervous. These guys don’t just rock one EDC: they are a walking arsenal of stainless steel. Their offices have more Bowie knives then paper clips.

Anyway, Knife Depot proposed that I work full-time for them, writing and building the knife community. It sounded like a sweet deal and I only had one condition: I demanded that I’d be able to give away a minimum of one free knife a week to our loyal fan base. And not lame knives, either.  Only truly badass blades.

It was a tense moment, as the CIO of Knife Depot stabbed a Smith and Wesson Cutting Horse into a slice of cheese, popped it into his mouth and gravely considered my request.

Time to Give Away Some Badass Blades

So, my first order of business as the new Knife Depot Community Director is to give away not just one, but three badass blades.

Here’s how you get one:

Take a picture of yourself with the Knife Depot slogan, NEVER LOSE YOUR EDGE, written somewhere on your body just like I did above. Then, email it to [email protected] You  have until Friday at 5pm Central to enter. Then, we’re going to give three lucky winners their choice of either of the following knives:

The Smith and Wesson Cutting Horse

Thanks for being an invaluable part of the Knife Depot community and good luck.  Feel free to email me any time with questions or suggestions at [email protected]