Knives Save Lives: "Do you have your knife?" 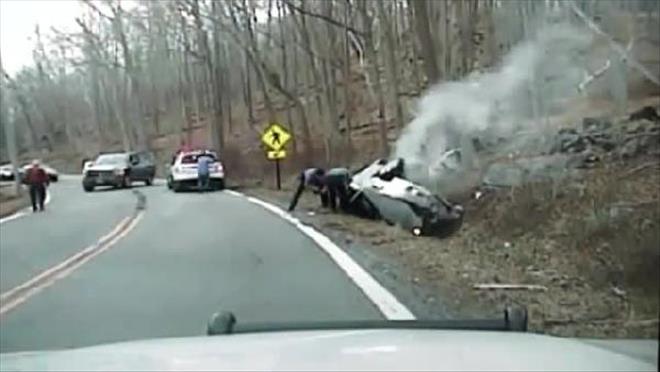 The car is normally our companion, transporting us from point A to point B without asking much in return. The car and its driver work together to navigate the road and react to unexpected situations.

But when things go wrong, the car can quickly become our enemy, a two-ton hunk of metal that aims to crush us and snare us as flammable liquid surrounds us.

That frightening and life-threatening situation was what a woman found herself in after her car overturned on a winding road in New Jersey.

We’ve brought you tons of examples of how knives save lives on this blog, but this is the first time you get to see some footage of the dire situation.

Take a look at the news report.

In this situation, the woman inevitably failed the car because she was driving while intoxicated. She crashed her car and fell unconscious inside the smoldering vehicle.

Officers Mark Ehrenberg and Ricky Ferriola arrived on the scene and quickly jumped into action.

The unconscious woman was tangled in her seatbelt, and the officers couldn’t free her. So one officer said to the other, “Do you have your knife?”

The officer pulled out his knife, cut her free, and dragged her limp body to safety.

Even though what the woman did was reckless and potentially harmful to passersby and the police officers, she did not deserve to die trapped inside a burning car.

She was eventually charged with drunk driving and is now doing OK thanks to some quick thinking officers and their knife.