Interview with a Knifemaker: Stewart J. Light on the joys and challenges of knifemaking 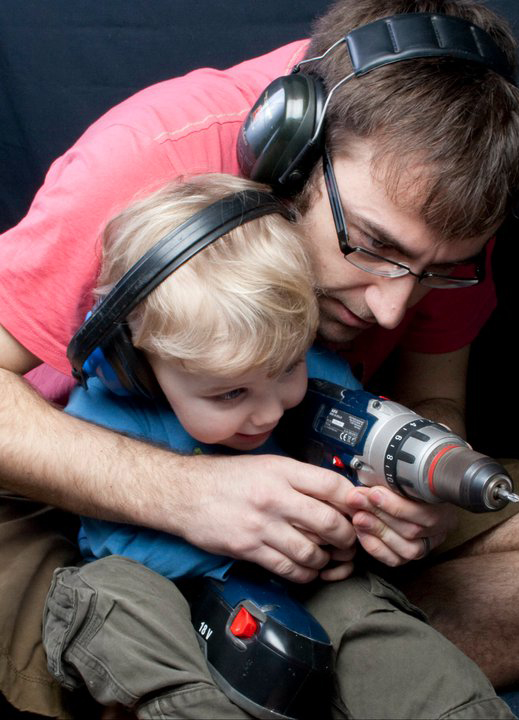 Any knife enthusiast knows some of the most amazing and unique designs come from custom knifemakers. That’s why when I stumbled upon the awesome knives of Stewart J. Light, I knew I had to talk to him. I interviewed Stewart through e-mail to get his perspective and thoughts on knifemaking. Here’s the full interview. (Editor’s note: There are some British variations in spelling.)

After you’re done reading, I recommend checking out his blog for more images and interesting posts.

For start off by telling us a little about yourself.

I’m originally from Grimsby in the North East of England. Twelve years ago I went to the University of Hertfordshire to study Sports & Exercise Science and have stayed down south ever since.

After university I got a temporary job working as a porter in a hotel/conference centre. I have been working there pretty much ever since and am now the Conference Manager so spend my day in a shirt and tie – quite different to being in my messy workshop!

At university I met my future wife and we have just celebrated the birthday of our 3-year-old son and 1-year-old daughter.

When and how did you first become interested in making knives?

I fell into it, but it now feels like a perfect fit. There are a number of factors that lead me here, I think.

As a young kid I would often be out in the back garden watching my Dad doing bits of woodwork, which slowly turned into doing some bits myself.

It was primarily woodturning on the lathe but was odd bits of carpentry as well. I always felt there was a fairly relaxed attitude about what I was allowed to do. I was left to experiment as I wanted to. Encouraged a bit here, cajoled a bit there. The things I produced weren’t amazing, and I’m glad it wasn’t suggested that they should be. I was learning to use my hands and my head.

I would often tinker about with things, and the first knife I made was either a snapped off hacksaw blade that I sharpened on one edge using my Dad’s grinder then attached to a stick of walnut with some twine or it was a six inch nail I heated on the gas hob and hammered the end flat using the back door step as an anvil (I don’t know if my parents knew I did this!) and then quenched in water, thinking that I knew what I was doing. Both were awful things that wouldn’t be much use for anything but I enjoyed myself. 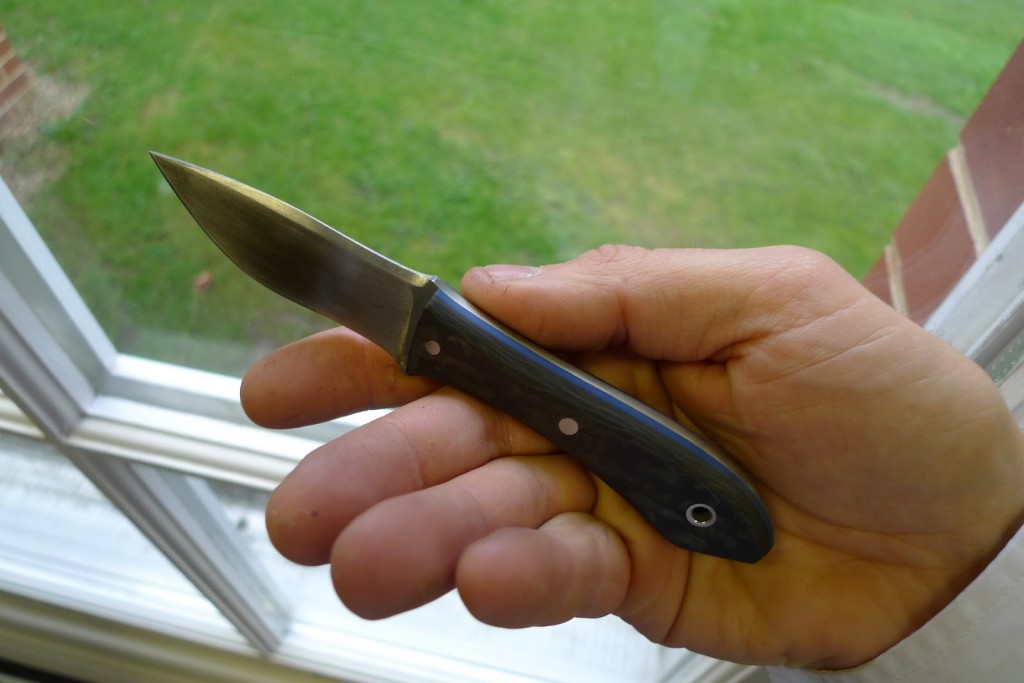 Another big factor is that I was in the Scout movement all the way through every section, so the best part of twelve years. Looking back, I think it’s one of the biggest things in shaping who I am today, but what it also did was give me a real love for the outdoors. That combined with Ray Mears on the TV introduced me to the idea of ‘Bushcraft’ which then lead to choosing a knife to use. I started to see knives that other people were producing and I wanted to try myself. That was seven years ago and now it is my main hobby.

What is your favorite part of knifemaking?

What I love about knifemaking is the variety.

Metal work producing blades – both forging and grinding. Making the handles out of wood or synthetic materials.

Working with leather for the sheaths.

Depending on what mood I’m in, or time I have, I can find something to work on.

I take on big jobs of whole knives or sometimes I’ll just put a handle on for someone. It’s great.

A distinct favourite took a bit of thought but while working on the handle for a large knife the other night, I realised what it is – that point where you have an ugly lump of wood stuck on your knife blade then you spend some time sawing, filing, grinding it down and suddenly a handle springs out at you. Sure, there’s plenty of work still to go with shaping and finishing but it’s suddenly alive as something usable.

Right now, you said you primarily focus on fixed blade knives with plans of moving into folding knives. What are the challenges of making folding knives?

You’re moving away from just taking a piece of metal and sticking a handle on it but have to start making sure that everything interacts together correctly.

I completed my first slipjoint folder in December 2010 as a present for my Dad. I kept putting off making it, as I was quite apprehensive about it. Getting the knife to open and close properly, while having the spring flush to the liners in both places was really tricky. It was far from perfect but a usable knife.

However, the idea of making my second slipjoint is actually more intimidating than the first, as now I have a better idea of the challenges I’m going to face! It’s only now looking back that I realize how long I’ve been putting it off.

I’m not intending to limit myself to just slipjoint folders. I’ve tinkered with friction folders but also want to make some frame locks and linerlocks. What I really want to make is a flipper!

What’s the most difficult part of knifemaking in general?

I could make a knife pretty quickly but making it look good and work as it should takes more time.

It would be very easy to jump from one step to the next without finishing the previous one correctly. I could be left with a knife that had uneven grind lines, ugly scratches, a handle that doesn’t fit perfectly to the blade and so on. It would still cut, but it would look rubbish. It’s essential for me to slow down and work through the process correctly, going back in steps if necessary. It can be very frustrating at times.

What types of customizations do you make to knives? Is the end goal to customize the knife for Bushcraft?

I just see any customizing I do as a bit of fun.  There is no standard end goal.  Some people seem quite fixed in how things should be and quite apprehensive to do any tweaking or customizing. I like to stay open to different ideas and am prepared to take on jobs that others shy away from. Sometimes it works, sometimes it doesn’t but the journey to get there is just as interesting for me.

Do you have any favorite brands or types of knives you like to customize more than others?

No, not really. I enjoy the variety and keep quite open minded. There’s nothing that’s sacred!

I’m sure it’s definitely hard to pick, but what’s been one of your favorite knives you’ve made or customized so far?

Actually not that tricky, but I will give you two answers.

The favourite I’ve made from scratch is a hunter. The design came from my friend James Wood and the story and more details of the other knives is told in more detail on my blog. In short, a number of people all made a knife to the same design and when it was completed I was supposed to send it on to someone else and I would receive one in return – all the knives going round in a circle. I fell for mine, so I made a deal with the future owner and was allowed to keep it. It just feels perfect in my hand, like no other knife I had made up to that point. 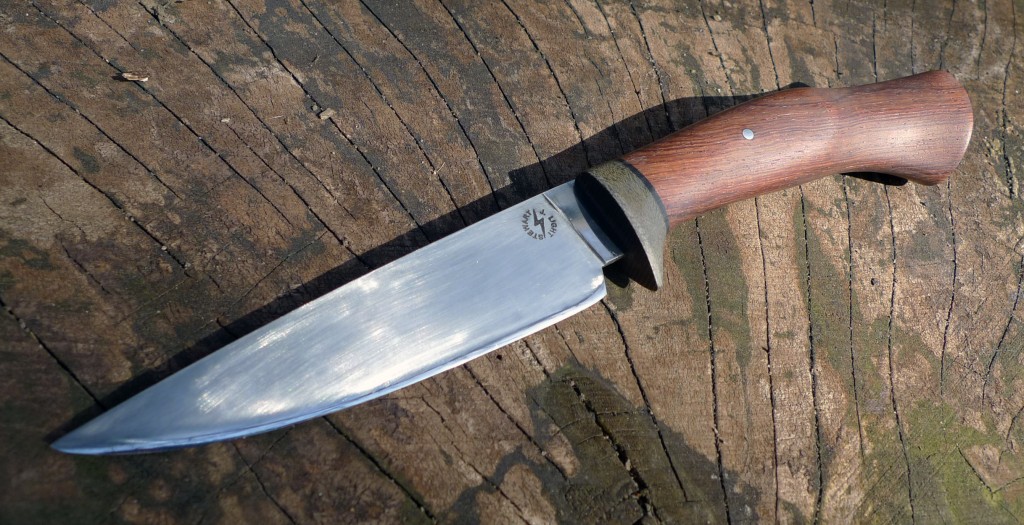 One of Stewart's favorite knives, this is a hunter made from recycled saw blade with a Cocobolo handle and green micarta bolster.

The favourite I’ve customised is a Cold Steel Kukhri. It was done for a chap going travelling, but he wanted it with a more interesting handle than the standard rubber one it came with. There was a short time scale for it as he had left it a bit late but I was really happy with the result. The look of it is completely different to the factory handle with no loss of performance and I was very impressed with the blade. If I could get one, I would have one for myself!

For more behind the scenes looks at knifemaking or to talk to Stewart Light about commissioning a knife, check out his blog.

Knife chainsaw: Does it top the machete slingshot?