How to fight effectively with a tactical knife

The post is part of our Rambo Knife promotion, in which we’re giving away a limited edition Rambo knife and more.  Check out our kick off post for details. 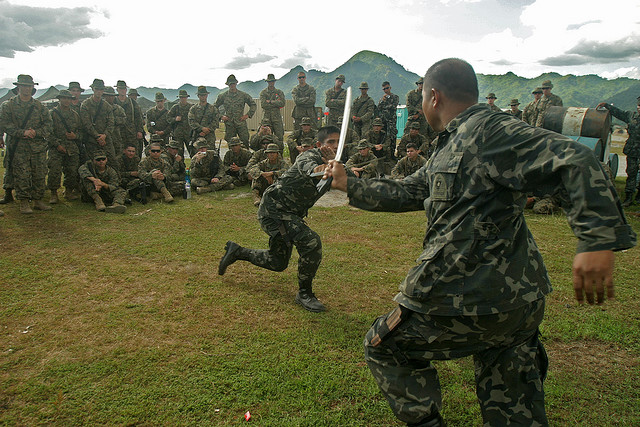 Knife fighting is a primal, dangerous and beneficial skill to have. Not only does it help you connect with your tactical knife in new ways, but it also gives you some respect. In this post, we’ll be looking at some of the very basics of tactical knife fighting. With our usual warning, we urge you to be safe and don’t try any of this around another person. So, if you’re interested in fighting effectively with a tactical knife, here are some of the basic elements.

1. Get to know your knife

The first step before you do anything should be to become familiar with your knife. Learn its weight, shape and texture before engaging in any training. By knowing your knife’s quirks and intricacies, it will never surprise you in a real fighting situation.

How you hold your knife is probably the most important thing to know when learning knife fighting because without a firm grip, you could drop the knife and find yourself in deep trouble. Unfortunately, there is no one universal way you’re supposed to hold your knife, so that’s why it’s important to get to know your knife. Some knives feel more natural in certain grip positions.

The grips can be separated into three broad categories: forward grip, reverse grip and unusual knife grips. Within each of these categories are a number of variations, including the hammer, saber and Filipino grips. According to a booklet on U.S. Marine Corps knife fighting tactics, the hammer grip is preferred over all others because it enables a variety of tactics. For a detailed description of each grip, check out Jay Fisher’s site.

3. Plant your feet in a balanced stance

The next basic element of knife fighting is the stance. Again, there is a lot of variation in the stance, but one of the most recommended stances is the fencer’s stance, which is also know as the triangle stance. You basically just put one foot in front of the other, so you have good balance and range of movement.

Almost as important (if not more) than the first few basics are covering and the shield hand. The covering philosophy is that in your stance, you use the knife to provide yourself cover from your enemy. Always keep your knife between you and the enemy as a buffer. The next factor of defense is the shield hand. It’s exactly what it sounds like. You put the hand that’s not holding the knife in a position that blocks your throat and chest. The idea is you want to have a barrier in case your enemy tries to attack you with their knife. You’d rather have your arm get stabbed than your vital organs.

5. Aim to disarm your enemy

While movies always have  intense knife fighting scenes where they battle to the death, a good tactic is to fight for your enemy’s weapon. If he’s experienced, he’ll likely be blocking your knife attacks through covering or a shield hand, so you probably won’t be able to severely injure him. Instead, aim for the hand that’s holding the weapon to disarm him. Without a weapon, your enemy will no longer be a threat to your personal safety.

How To, Knife Learning, Tactical Knives

The Evolution of the Iconic, Badass Rambo Knife