Sometimes the best ideas are those that make you say, “Why didn’t I think of that?” and “It’s so obvious.”

Those were exactly the phrases that came to mind when I saw the Firefly.

The Firefly is a custom sparking-steel fire starting tool that’s designed to fit into the toothpick slot of a Swiss Army Knife. This small tool is an aftermarket accessory made by a company called Tortoise Gear and is not affiliated with Victorinox.

The project launched on the crowdfunding service Kickstarter on September 26 with the goal of $28,000 by November 7. As of this writing, the team is already at about $25,000 just a few days into the campaign, so things are looking pretty good.

Swiss Army Knives are the most frequently carried pocket knives around the world and come with variations of dozens of tools, such as pliers, files, scissors, magnifying glasses, compasses, USB sticks, and more. Frankly, it’s a little surprising Victorinox hasn’t added a fire-starting rod to its list of tools.

The accessory is essentially a ferro rod, but it is made using a mix that doubles the strength of a regular ferro rod. In the comments section, the company even answered a question about degradation and ensured that the mix was stable and well-made.

Another notable feature of this tool is the bright neon thumbnail grip that glows in the dark. This allows for high visibility in the day or night. It also comes in two sizes for small and medium/large Swiss Army Knives. It will also apparently stay functional even after heavy use.

I can definitely see this being a pretty useful tool on the larger or outdoor models as it would further make the multitool one of the most essential pieces of gear you can carry.

I’m not sure if I’ll be able to get my hands on one when they finally get shipped and sold early next year, but I’ll keep you updated with any thoughts or reviews on the tool. 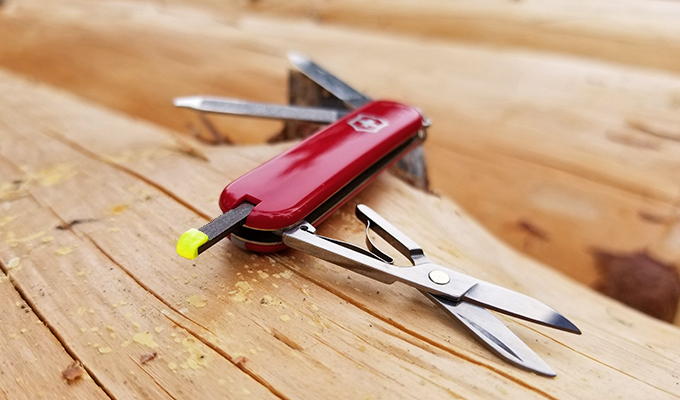 In the meantime, you can order your own at the Kickstarter page.

Gerber E-Z Out Skeleton – Badass Knife of the Week