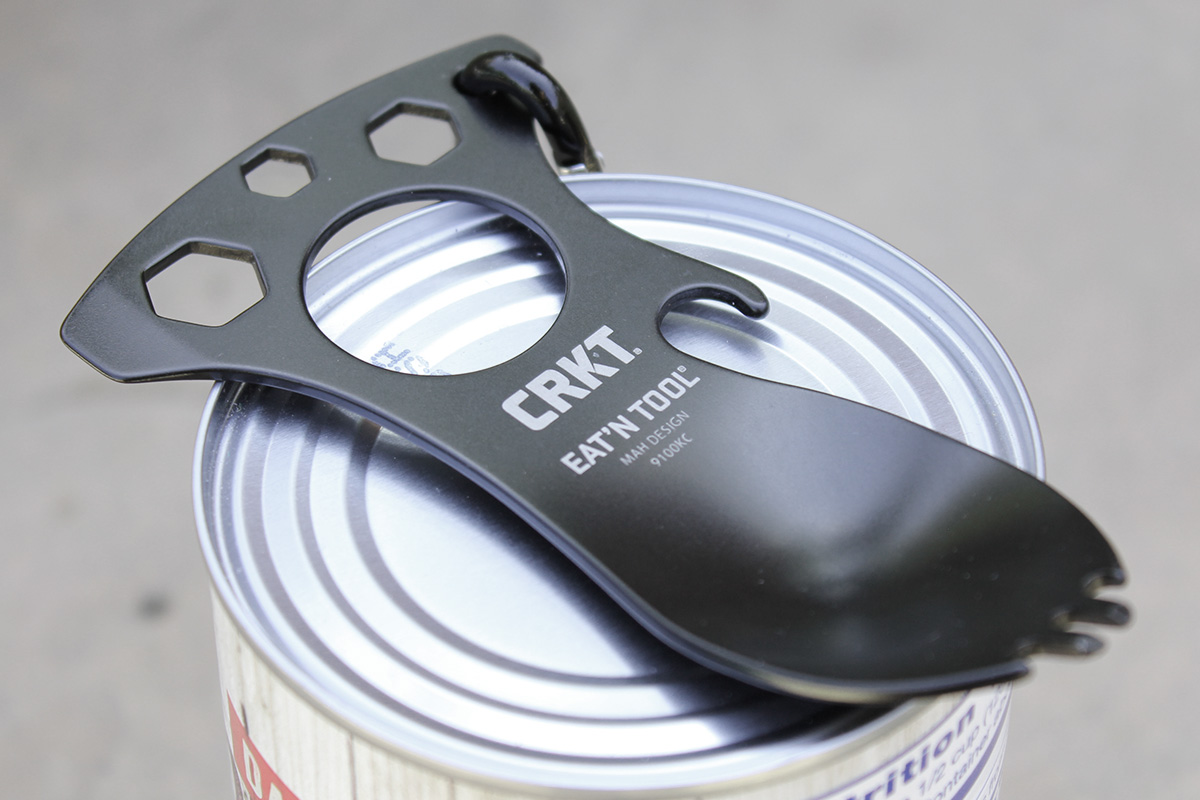 Preparation is the key to survival.

Imagine this scenario: You’re lost out in the wilderness for days surviving on berries and wildflowers when all of a sudden you come across a fresh and perfectly made banana split. But all you have are your hands to eat the delicious and potentially life-saving ice cream creation, so you pass it along and succumb to starvation hours later.

If only you had a tool for eating something on the go.

Sure, this tale is grossly exaggerated (and you would just use your hands to eat and deal with the mess after), but it also serves as a cautionary story about the need to be prepared for everything and that includes eating like a civilized being.

Fortunately for those of us who like to eat on the go without getting our hands dirty, manufacturers make a range of tools designed to serve as utensils in any situation. Here are some of the best. 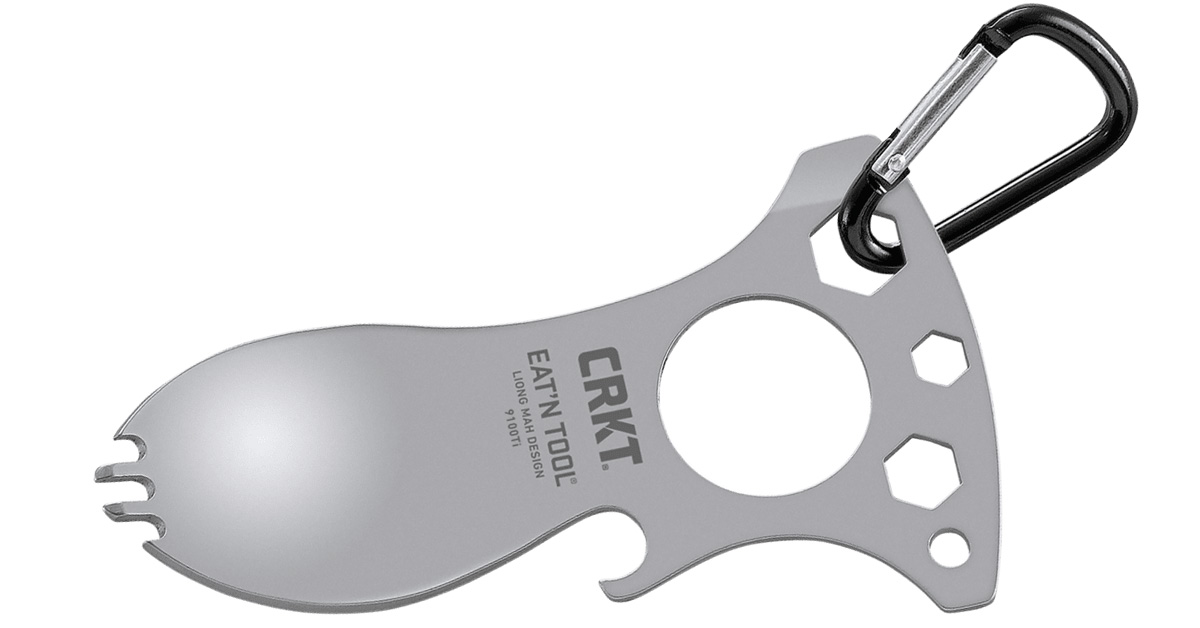 Let’s start off with one of the most famous eating tools: the CRKT Eat’N Tool. This little guy has become one of the gold standards for what a simple yet effective eating tool should be. Designed by Liong Mah (of CRKT Remedy fame), the Eat’N Tool has a spork setup with some extras like a bottle opener, screwdrivers, pry bar, and metric wrenches.

Thanks to the cutout in the middle, the tool is surprisingly comfortable to use. It weighs 1.5 ounces and is meant to attach to your keychains for those times you’re stuck without a spoon. If you want a longer one, you can grab the CRKT Eat’N Tool XL. 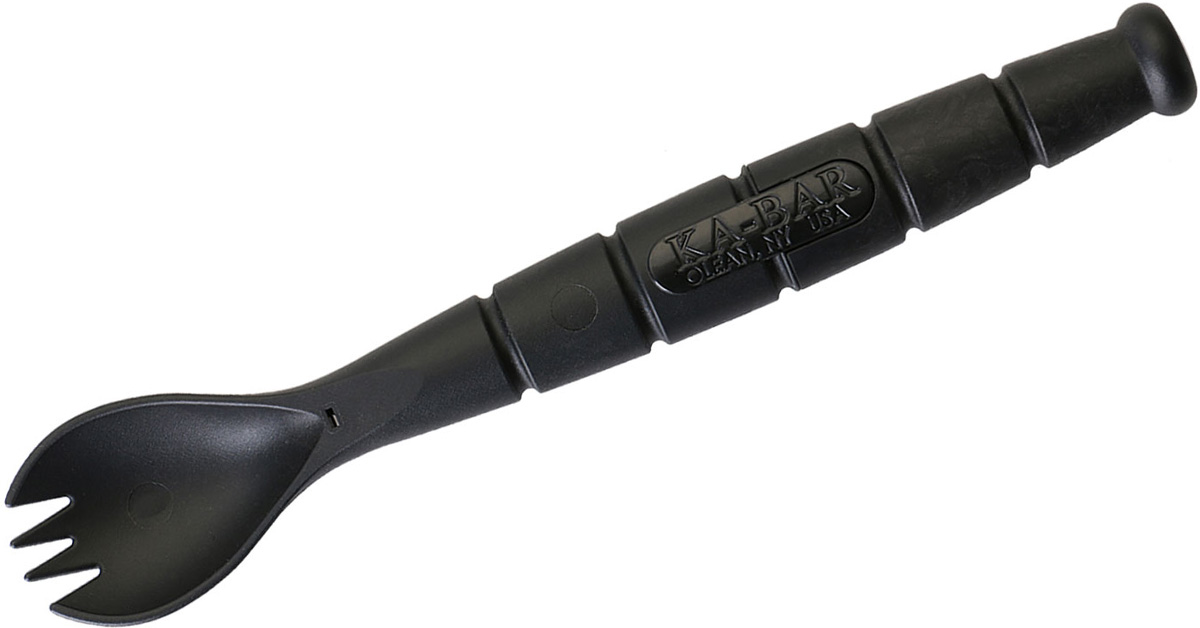 So the name is a little silly, but the concept of the KA-BAR Tactical Spork is great. This is a compact eating utensil made from black Grilamid and looks like a classic spork when closed. But when you need a knife, it splits into two for a knife and fork set. 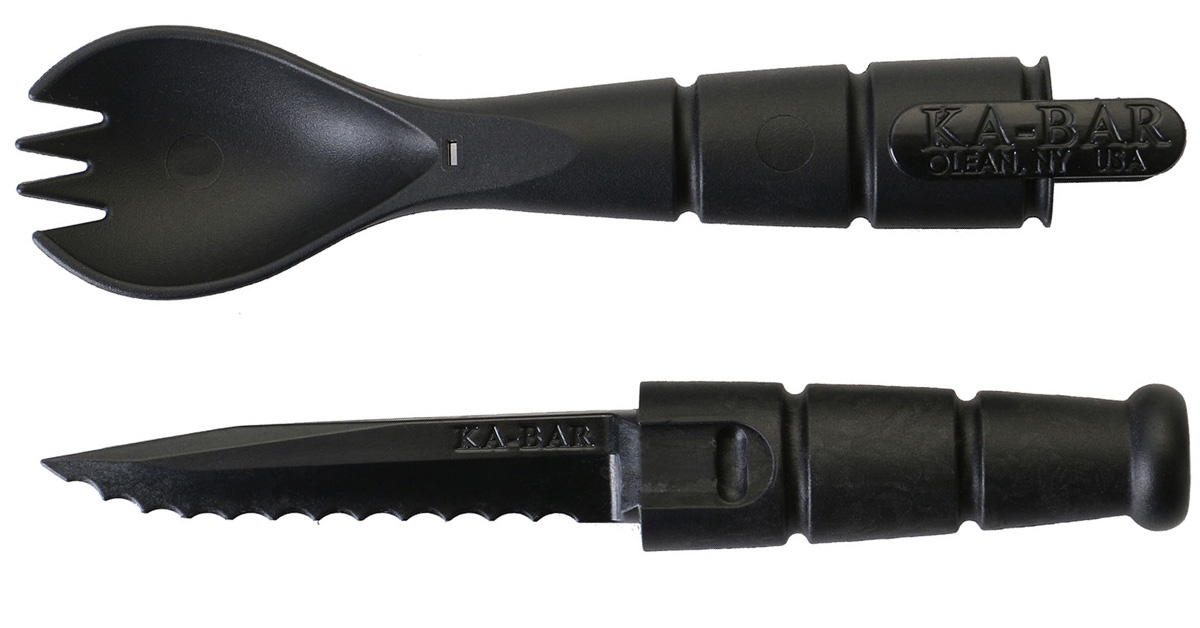 This tool is made in the United States and has an overall length of nearly 7 inches. This is a good camping set or something you can easily stick in your bag or EDC kit. 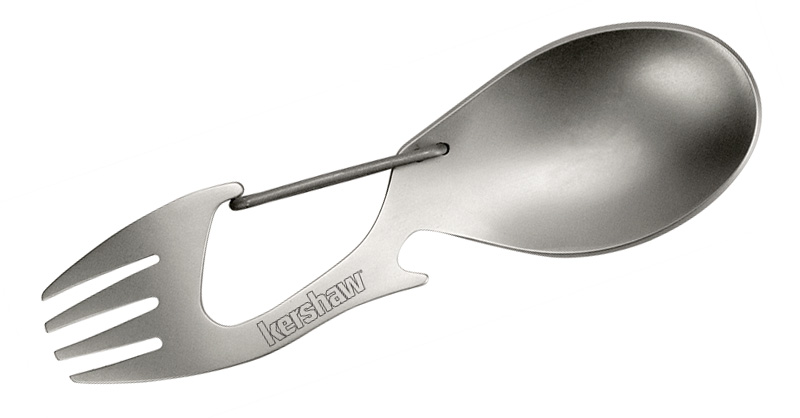 The Kershaw Ration shies away from the spork, which does have some limitations and makes a tool with a fork and a spoon (as well as a cap lifter). The stainless steel tool is compact and weighs 1.1 ounces. It also has a cool carabiner to easily attach to a backpack or lunch bag for when you need it.

This tool has been getting a ton of love and was even named one of the best pieces of camping gear of 2017 by Hunt Alaska. 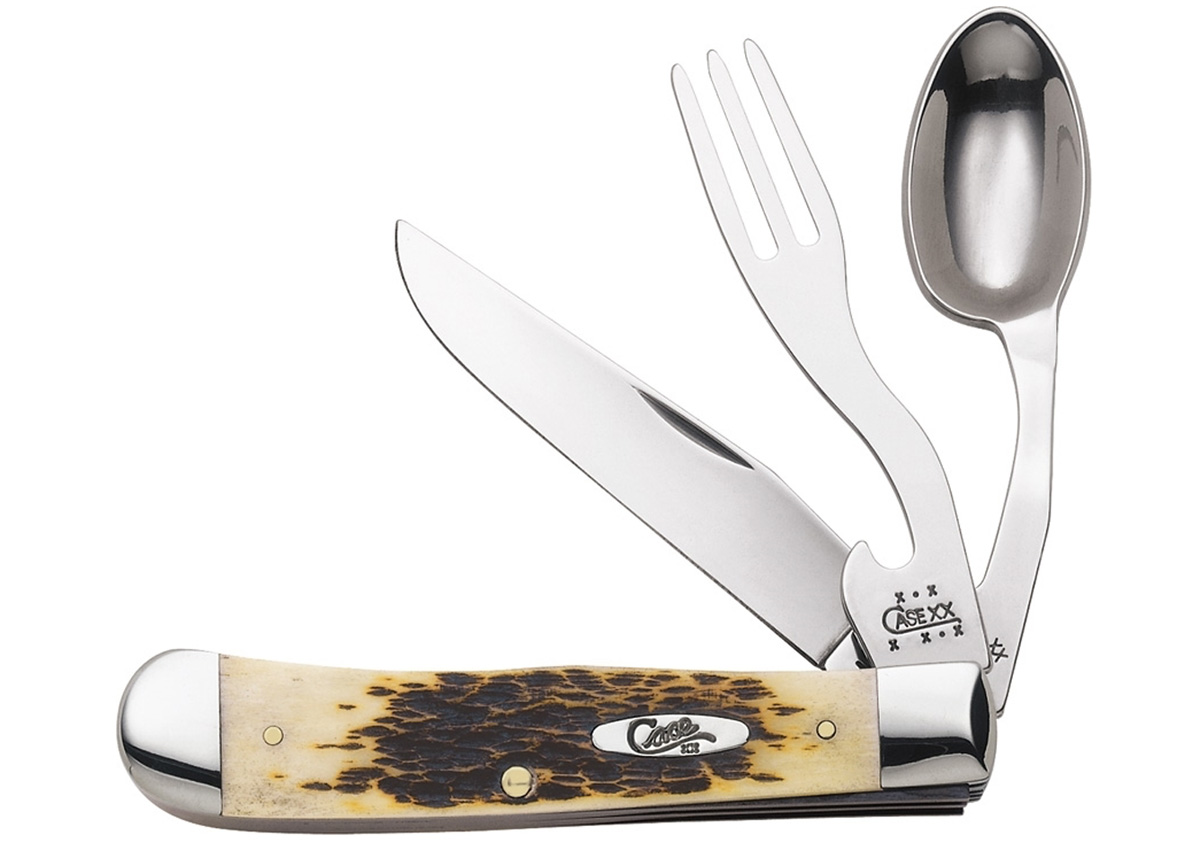 Hobos are vagabonds known for hopping the rails with their bindles and setting up fires under the bridge where they eat their cans of beans and pieces of meat. That’s where the Case Hobo comes in handy.

Whereas the previous tools are very simple and inexpensive, the Hobo is for those serious about their eating who want something a little more ornate. This version of the knife comes in rich amber bone handles encased by steel bolsters. The knife contains three utensils: a knife, fork, and spoon.

For those times you’re eating a piece of steak and need a fork and knife, the Hobo has you covered. The ingenious design allows you to remove the three utensils from one another when they’re open. It’s quick and simple. Then when you’re done, you can put them back together to get your whole knife back.

It’s a bit on the heavier side at 7.7 ounces, but it’s definitely worth it for all the hobos out there. 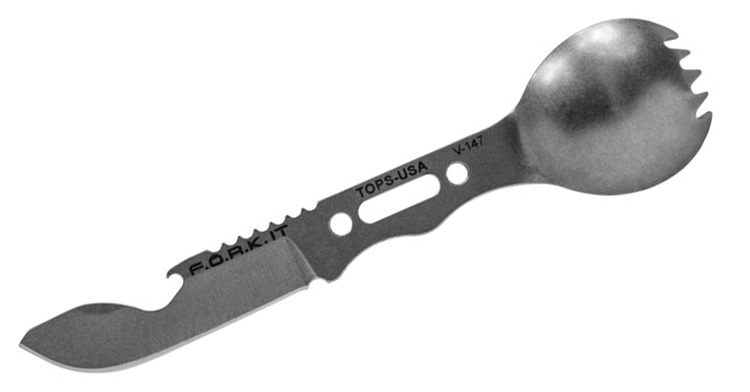 I’ve mocked TOPS for their crazy names, but I have to admit they make a darn good product. Take the FORK It, for example. This little tool is more than just an eating utensil but can also work as an everyday carry.

On one side of the tool is a spork with aggressive tines and a deep bowl for those who actually want big spoonfuls of food. On the other side is a blade with a can opener and jimping on the spine for better control. That side fits into a Kydex neck sheath that allows you to use the spoon and bottle opener without removing the tool.

The tool itself is lightweight 1.5 ounces (2.5 with the sheath) and uses 1095 carbon steel with a stonewash finish. It requires a little more upkeep than stainless steel, but the benefits are notable. 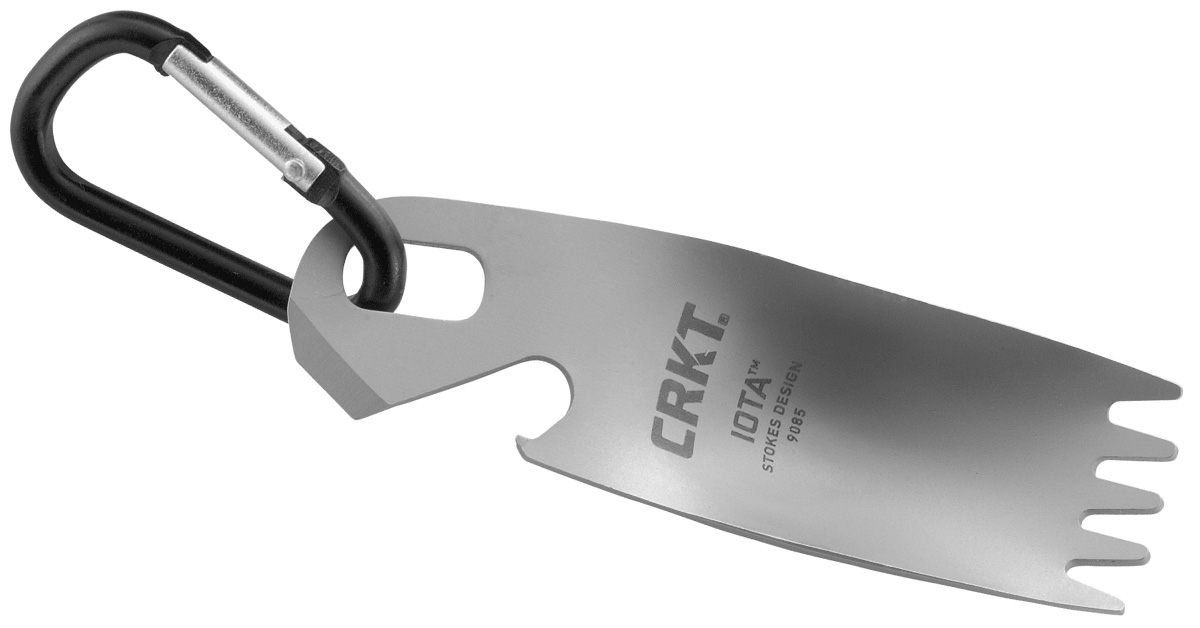 The Iota is a new tool that’s like the Eat’N Tool but more streamlined. It looks more like a fork than a spork but still has a deep bowl for eating liquids. A bottle/can opener is slotted into the side of the tool, and a carabiner clip allows for easy carry.

This tool is made from 2Cr13 stainless steel and weighs only .6 ounces. 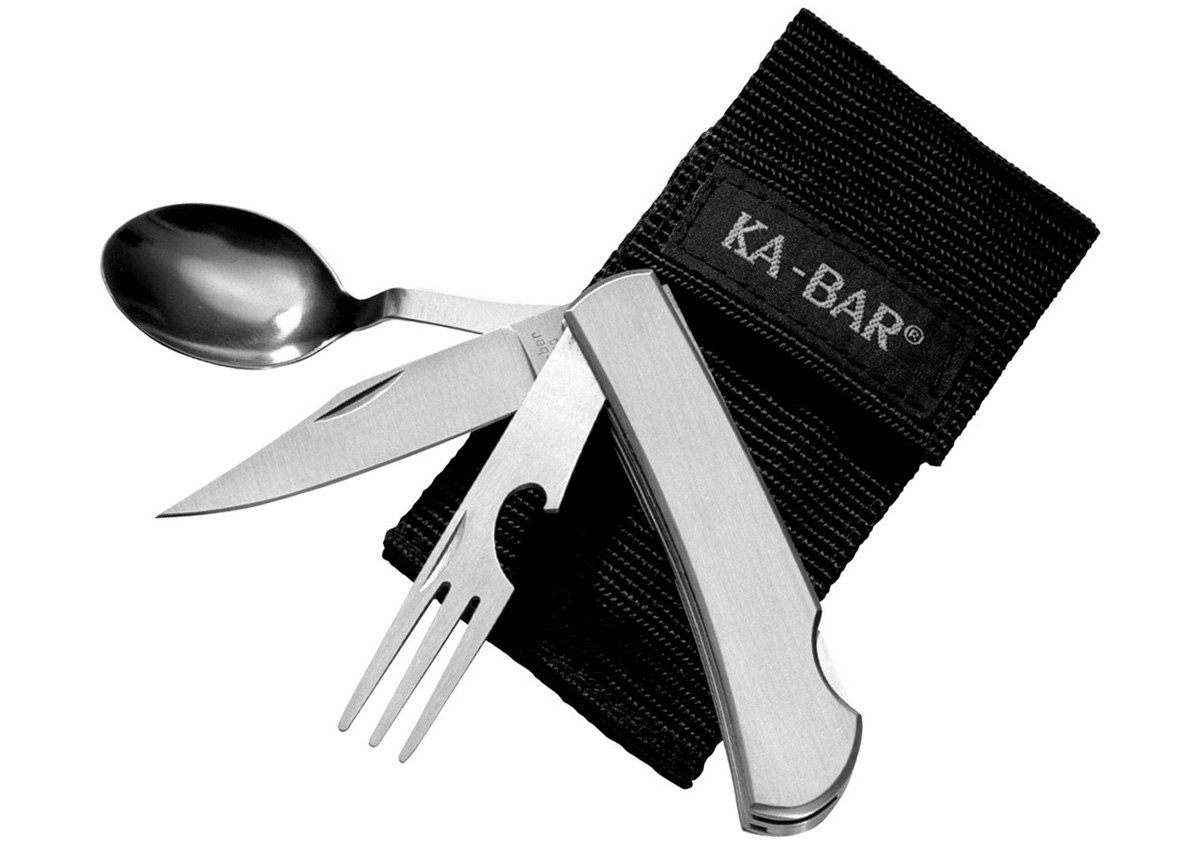 KA-BAR wanted to get in on the hobo action with its own hobo tool. The design of the KA-BAR Hobo 3-in-1 Utensil Kit is very similar to the Case Hobo with a few differences. First, it’s not as ornate and therefore not as expensive as the Case. Second, it has a lockback mechanism to keep the knife engaged. Finally, there’s a can opener attached to the fork utensil.

Seeing how this is less expensive and less ornate, it’s not hard to just keep this stowed away in your glove compartment for when you need it. 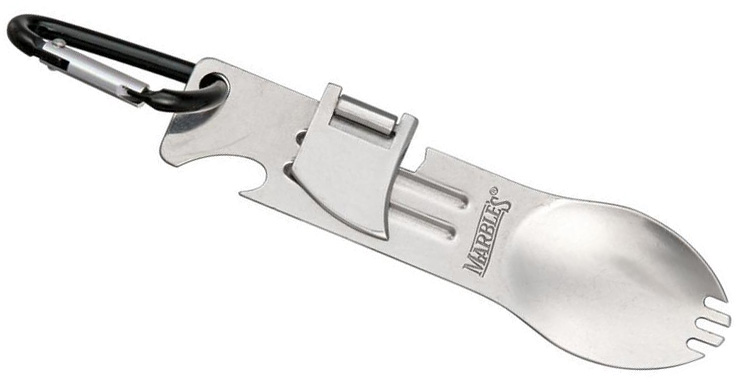 Finally, there’s the Field Ration Eating Device (FRED) also affectionately known as the F***ing Ridiculous Eating Device. This is a small tool that’s issued to Australian armed forces in one of its ration packs. It has a small can opener, a cap lifter, and a spoon that kind of resembles a shoehorn.

There are people who make unofficial versions of the tool, but you can also find them at some army surplus stores. It’s not the best design, but it’ll get the job done.