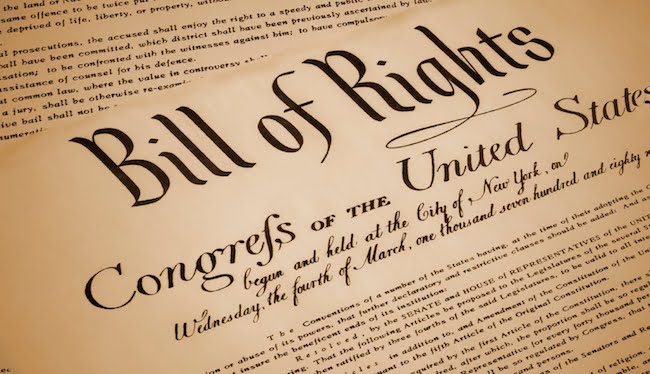 The U.S. Constitution is an amazing document. The whole thing has been interpreted and studied countless times, but no part of the Constitution has caused more grief and political turmoil than the Second Amendment:

A well regulated militia, being necessary to the security of a free state, the right of the people to keep and bear arms, shall not be infringed.

People over the centuries have read and made countless inferences from the poorly worded amendment, but the Connecticut Supreme Court recently and unequivocally stated that knives are protected under the Second Amendment.

To be clear, it was always assumed that knives are protected under the U.S. Constitution, but as Knife Rights puts it in a press release, “actual court rulings on this issue are always appreciated.”

The Supreme Court of Connecticut reversed the conviction of a man who was transporting his collection of weapons, which included knives, to a new place in Bolton, Mass. As you might guess, Connecticut has pretty stringent knife laws and any weapon inside a motor vehicle is in violation.

But the court noted the Second Amendment “protects the defendant’s right to possess the dirk knife – in his home and, second, that the statute’s complete ban on transporting those items between residences unduly burdens that right.”

The court said the “safe transportation of weapons protected by the Second Amendment is an essential corollary of the right to possess them in the home for self-defense when such transportation is necessary to effectuate that right.”

His car was searched after getting in an accident and that’s when police found two machetes, a sword, smaller knives, and a police baton. He was charged with six counts of having a weapon in a vehicle but was acquitted of four.

He appealed the other convictions to the Connecticut Supreme Court, and it unanimously wrote that his Second Amendment right to keep and bear arms was violated.

Knife Rights is obviously very pleased with the decision and said it has potential wider implications for knife laws.

The court was particularly kind and sympathetic to knives in its ruling, stating that knives have been an important tool in American history. Here’s an excerpt of their praise:

“Well after the nation’s founding, knives continued to be an important tool for many Amerians soldiers. During World War II, American soldiers, sailors, and airmen wanted and purchased fixed blade knives, often of considerable dimensions. At least in some units, soldiers were ‘authorized an M3 trench knife, but many carried a favorite hunting knife.’ The Marine Corps issued the Ka-Bar fighting knife. As one World War II memoir records, ‘this deadly piece of cutlery was manufactured by the company bearing its name.’ … Vietnam memoirs record that Ka-Bar and similar knives were still in use…”

Those are some exceptionally friendly words toward knives, but it’s still unclear what types of long-term or widespread implications this will have on knife laws.

Man Survives Having a 12-inch Kitchen Knife in the Head